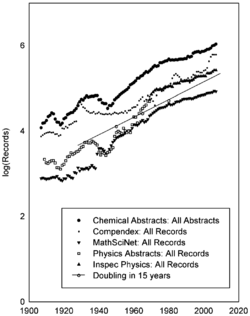 The number of scientific abstracts is increasing exponentially (semi-log scale), doubling about every 15 years.

Journals are a key element of scientific life. A partly public source of information, the end point of a project, and a measure of researcher productivity. The first was published in 1665 and many new ones appear every year with the number of articles growing at 3-5% per year [1][2]. Current debate regarding journals revolves principally around the issues of increasing subscription costs and rare open access to mostly publicly funded scientific results. 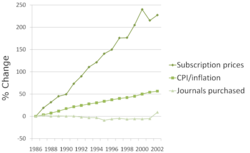 Subscription cost of journals are skyrocketing. Increases cannot be justified by inflation.

The first scientific journals were founded in 17th century Europe, at a time of Louis XIV, Baroque art, extensive warfare, and the Scientific Revolution. In January 1665, the French publication Journal des sçavans (journal of savants) was the first on the scene with a mix of science, history, and law, morphing later into a literary journal which no longer publishes significant scientific results. In April 1665, the English Philosophical Transactions of the Royal Society started publishing - philosophical referring to natural philosophy which would now be called science. The journal is still active [9] and can be considered the world's oldest exclusively scientific journal.