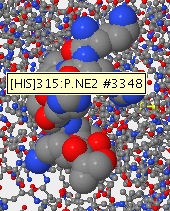 Histidine is a surface protein. An amino acid change that occurred was from Asp to His. Aspartic is acidic, whereas Histidine is basic. For this reason, I believe that such a substitution may affect protein function.

Leucine is buried. In this position, a change from Glysine to Aalanine occured. Both amino acids have small side-chains which are non-polar hydrophobic. Therefore, it is possible that this substitution would not affect protein function.

For this next Journal Club, I shall be working with the great, Samantha Hurndon. We will be researching the microarray dataset from species Helicobacter Pylori. Our paper is HERE