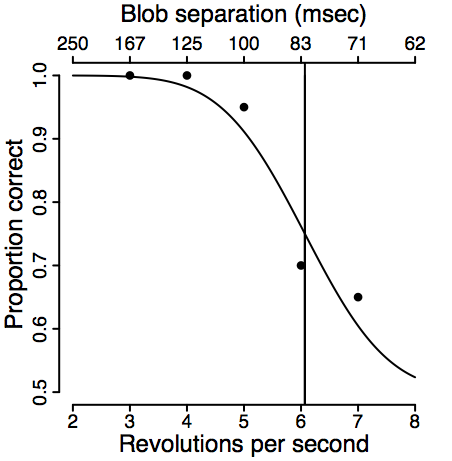 Why does performance start to fail at 6 Hz when analysis below shows this corresponds to poor temporal resolution, comparable to what we estimate from position judgment tasks?

Check out the plot attached for the side-by-side in-phase judgments task. To the naive eye, it doesn't look good that the blob separation needed for 75% correct i the 2AFC task is a separation of 80 ms (at ~6 Hz, when the blobs are out of phase they are 1000/6/2 = 80 ms apart. When we did this experiment we were impressed because at the time the main thing we thought about was that responses in the position judgment task seemed close to chance (hard to distinguish from a uniform distribution) at 3Hz. We were amazed by that then because we didn't understand how with a circular variable, how at 3 Hz (333 ms around), even a 100 ms Gaussian's tails would wrap around so badly that it would look almost uniform. Dani you're now convinced that that's the situation, right? So

-For the moment, for simplicity let's consider one of the blobs to have fixed position and the other variable position

-At 6 Hz, 90 degrees is 42 msec. If the variable were not circular, instead a linear Gaussian, then with a standard deviation of 42 ms they would misperceive the position by more than 90 deg 33% of the time, giving 66% correct. To get 75% correct or only 25% incorrect corresponds to a two-tailed z-score of 1.15. This means that 1.15*stdev = 82 msec with these assumptions, or stdev=71 msec. In other words, the phase judgment task suggests an underlying distribution of 71 ms, which means it gives similar rather than better performance than position judgment!!

-The weird thing is that when you consider that the variable is circular rather than linear, you actually get increased performance I think. Because the tails in the case of a circular variable sometimes wrap around so that you actually get it right! Am I thinking correctly here?

-But what is the calculation if we drop the simplifying assumption of one blob being fixed? Then the difference in positions, which is the difference of two independent-we-assume circular gaussians, leads to correct response if shifted by (90,270).