Back to Dedicated systems

A simple implementation of a biological virtual machine is shown on the right. Initial testing suggests that this virtual machine is a functional way to produce a specific protein, see the results section below. A plasmid encoding dedicated ribosomes were obtained from Chris Hayes based on the earlier Brink paper. T7 RNA polymerase is used as a dedicated transcription system.

BL21(DE3) already contains a dedicated transcription system. Together with pCH1497-ASD1, this cellular chassis becomes BL21(VM1.0). Any engineered system whose protein synthesis is controlled by genetic elements conforming to the VM1.0 specification will function in this chassis. 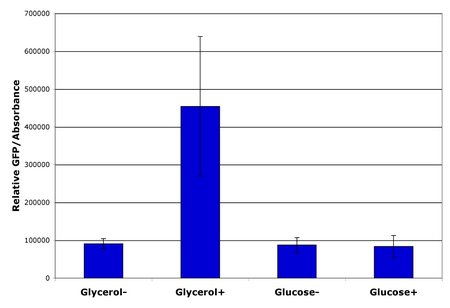 Figure 1 shows the results from the first experiment to test GFP production using VM1.0. IPTG was used to induce the dedicated transcription system and arabinose was used to induce dedicated translation. The results showed qualitatively that the dedicated systems were working in combination. However, these results were hard to repeat. Cultures did not grow, or did grow but did not produce fluorescence when induced, and plates became old rapidly.

More recently, consistent results have been obtained obtained. Performing the first dilution at a lower OD (~0.6) seemed helpful and allowing the cells approximately 5 subsequent hours before inducing the dedicated systems produced the results shown in Figure 2. The figure shows the GFP level as measured by a plate reader normalized by the absorbance of the culture. VM1.0 containing the reporter construct BBa_E7103 was grown in the presence of 0.4% glycerol or glucose and either with or without inducers of the dedicated systems. Replicates from three different colonies were grown for each condition. The error bars represent +/- one standard deviation of the replicates. The results show that glucose effectively shuts off the dedicated systems as is expected since they are controled by catabolite repressible promoters.

Now that a reliable protocol for using the virtual machine exists, we are currently performing more quantitative analysis of the behavior of VM1.0.

It would appear that if dedicated ribosomes are induced a number of hours prior to inducing dedicated transcription that GFP accumulates faster than when both sets of dedicated systems are induced at the same time. This is what might be expected. However, in the long term, net GFP accumulation is greater when the induction of both systems occurs simultaneously. Furthermore, the prior induction of dedicated translation does not affect the accumulation rate of GFP when the reporter device uses the cellular chassis' ribosomes. Net GFP accumulation is again higher when both sets of systems are induced simultaneously. It would appear that having dedicated ribosomes in the cell does have a long term effect on the supplies available to the system even though the two different induction conditions do not affect final cell density.