1. Choose two genes from Figure 4.6b (PDF of figures on Brightspace) and draw a graph to represent the change in transcription over time. You can either create your plot in Excel and put the image up on your wiki page or you can do it by hand and upload a picture or scan. 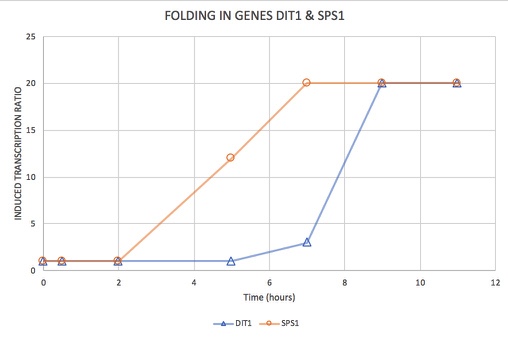 2. Look at Figure 4.7, which depicts the loss of oxygen over time and the transcriptional response of three genes. These data are the ratios of transcription for genes X, Y, and Z during the depletion of oxygen. Using the color scale from Figure 4.6, determine the color for each ratio in Figure 4.7b. (Use the nomenclature "bright green", "medium green", "dim green", "black", "dim red", "medium red", or "bright red" for your answers.)

Genes X & Y transcribed similarly as they both became green after 9 hours, albeit different shades of green. All genes were black after the first hour, then dim red after the third hour. The genes were all different colors after the fifth hour. Genes X & Y went in the green direction, while gene Z remained dim red.

5. Go to the Saccharomyces Genome Database and search for the gene TEF4; you will see it is involved in translation. Look at the time point labeled OD 3.7 in Figure 4.12, and find the TEF4 spot. Over the course of this experiment, was TEF4 induced or repressed? Hypothesize why TEF4’s change in expression was part of the cell’s response to a reduction in available glucose (i.e., the only available food).

TEF4 was repressed, which was represented by the green spot. Because of a reduction of glucose as the only energy source, the cell will not have the excess energy to form proteins, resulting in the downregulation of the TEF4 gene.

6. Why would TCA cycle genes be induced if the glucose supply is running out?

When there is a limited supply of glucose, cells will still need an energy supply to produce ATP. This would cause the need for the cell to induce TCA cycle genes to continue energy production through TCA.

7. What mechanism could the genome use to ensure genes for enzymes in a common pathway are induced or repressed simultaneously?

Combinatorial control of gene regulation could be used to ensure the correct genes are either activated or repressed under appropriate environmental conditions.

8. Consider a microarray experiment where cells deleted for the repressor TUP1 were subjected to the same experiment of a timecourse of glucose depletion where cells at t0 (plenty of glucose available) are labeled green and cells at later timepoints (glucose depleted) are labeled red. What color would you expect the spots that represented glucose-repressed genes to be in the later time points of this experiment?

9. Consider a microarray experiment where cells that overexpress the transcription factor Yap1p were subjected to the same experiment of a timecourse of glucose depletion where cells at t0 (plenty of glucose available) are labeled green and cells at later timepoints (glucose depleted) are labeled red. What color would you expect the spots that represented Yap1p target genes to be in the later time points of this experiment?

10. Using the microarray data, how could you verify that you had truly deleted TUP1 or overexpressed YAP1 in the experiments described in questions 8 and 9?

If the experiments worked, then the microarrays should also be red.

I worked with my homework partner Angela Abarquez and Austin Dias face-to-face outside of class. We worked on answering questions for the Week 2 assignment together.

Except for what is noted above, this individual journal entry was completed by me and not copied from another source. EdwardRyanTalatala (talk) 11:57, 30 January 2019 (PST)