For optimal viewing experience, please enlarge this window to at least 1024 pixels.

Below are AFM images of the claws alone, with and without binding elements. 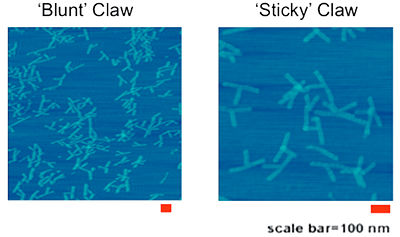 We used gel electrophoresis to characterize the binding interaction between origami structures and capsids with and without binding elements. 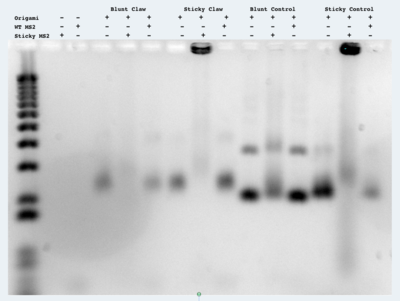 We have also demonstrated that the band shift on a gel is dependent on the stoichiometry of the binding anneal, implying that this technique can be used to detect not only presence-absence of the target substrate but also the concentration of the substrate. 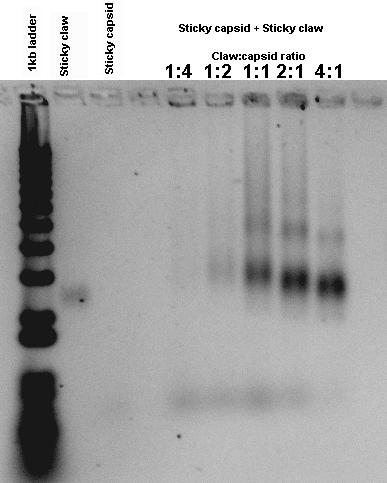 After exploring a number of avenues for optimizing binding conditions, we've managed to increase the specificity of the binding, thus improving our signal-to-noise ratio for systems based on this design. Tested factors include gel temperature, annealing at various constant temperatures and across various temperature gradients for different lengths of time, varied concentration of Mg2+ ions in buffer, addition of T15 in various ratios, 10% and 20% formamide in buffer solution, and short (TCA)4 and (TCA)5 "Nanny" strands. 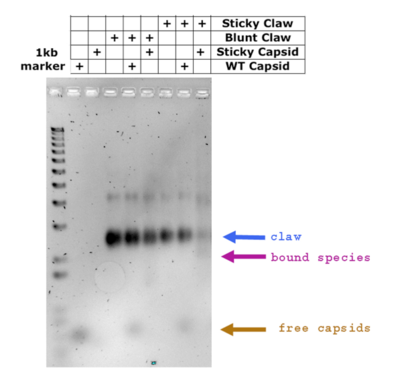 We are currently searching for conditions to improve the signal-to-noise ratio further.

Below is a gel demonstrating that versions of the claw tagged with different fluorescent elements can be visually distinguished on a gel. 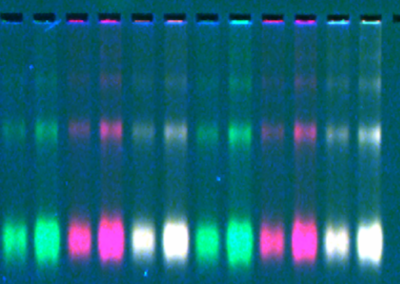 After optimising laser conditions to work with these dilute nanomolar solutions of origami and capsid, we managed to show that the origami control structure and the capsid are of different sizes. However, when performing DLS on a mix of nonfunctionalized origami and capsid, we found only a single peak rather than peaks showing two differently-sized objects. Based on data from other experiments, it is unlikely that this represents a binding interaction. We are currently investigating the source of this anomaly. 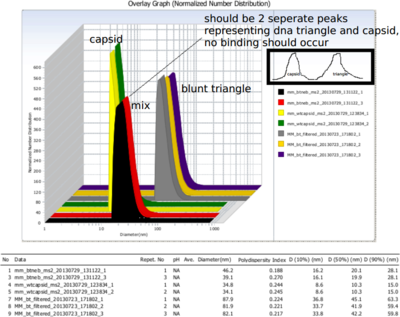 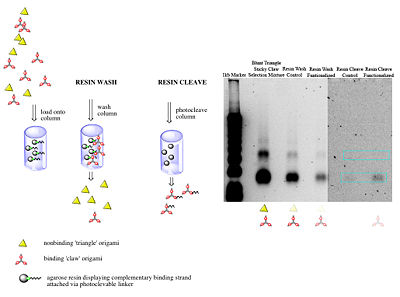 The blue boxes highlight where bands would be expected if the photocleaving reaction failed.
Note the presence of only functionalized claw in the post-cleavage solution.

We made many attempts at the literature reported papain digestion of IgG into Fab fragments without success. We switched to another enzyme system. Gratifyingly, using Ficin, we obtained Fab fragments. The following are the gel results obtained for the IgG sample.

Notice that in the first gel, the IgG shows up at around 150 – 250 kDa which agrees with what one would expect. Moreover, in the IgG digest, the band that is close to 50 kDa is the product of interest the Fab fragments. But notice that there are a lot of other impurities that interfere with the sample below 50 kDa. In order to get rid of all those bands, a purification step is needed.

Notice that after purifying the samples with the 30K spin columns, there are no bands below 30 kDa. This shows that the purification step was successful.

Utilizing atomic force microscopy (AFM), we managed to image 90 degree origami triangles with two groups of ‘extenders’. These ‘extenders’ are duplexes that have been made at precise stoichiometric ratios. The goal of this project was to successfully attach these two duplexes to the sticky ends of these 90 degree triangles. After obtaining several AFM images showing what appeared to be several triangles with duplexes attached to them, this AFM picture shown here demonstrates the best resolution and separation between each respective triangle. The duplexes that attached to the triangles had a complementary sequence to the sticky ends on the triangle, which is what made it possible for attachment. We have had difficulty in achieving a constant 90 degree angle with both of the duplexes attached. However, when measuring the angles of the triangles with both groups of ‘extenders’ attached, most of our angles were precise (around 100 degrees). In future projects, we hope to gather enough images (such as these) to plot the different angles obtained in an attempt to get as close as possible to 90 degrees. 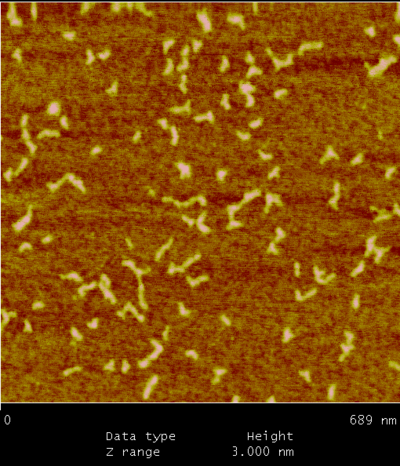 In examining these structures via gel electrophoresis, we would expect that the 90 degree origami triangle with both of its duplexes (or extenders) would run at a slower mobility than the triangle by itself or with one pair of duplexes. It became clear that this sample of triangle with both duplexes (which is the same sample that was used to generate the AFM image above) was a completely different specimen as compared to the other DNA complexes. We utilized a 50 base pair DNA marker to compare the different sizes of the complexes. What is most exciting is that we obtained a sharp and tight band meaning that our sample was one that had a specific DNA complex configuration. This was further supported in our generated AFM images. In future experiments, we could attempt to run a gel similar to this one at either a lower concentration or higher temperatures to eliminate the accumulation of oligomers in the wells. 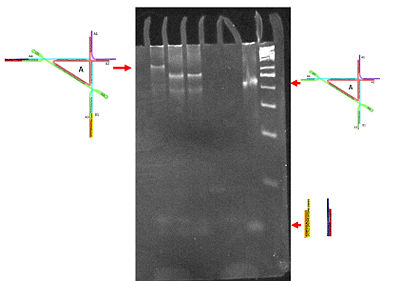