Proposed Paper(s) for Jon --Contact Jon for inquiries
Evidence that two smaller subunits of RPA bind weakly and preferentially to telomeric DNA. These telomere capping proteins have functional similarities (OB fold) with ssDNA binding proteins and may be involved in the recruitment of telomere maintenance proteins.

OK, I have read more. I may have mis-spoke in class so I wanted to answer Chayne's question. The G-quads inhibit tolemerase (active in stem,germ, and cancer cells). The would be a rare structure in the cell too. So the ideas is that drugs that mimic them or bind to them (stabalize the G-quartet) would inhibit tolemerase. --Jonfay 13:11, 12 June 2007 (EDT)

Q1. Do you think there is competition between the RPA and RPA-like complex for binding telomeres?

Q2. Do you think the authors provided sufficient evidence to claim that cdc13, stn1, and ten1 form a complex that is structurally and functionally similar to the RPA complex? If no, what additional experiments do they need to carry out?

The dependence protein binding on G-quad structure in the telomeres is not addressed in this paper. As a point of discussion, should the authors have experimented with the structural requirements of binding to the telomeres? What might be expected for proteins that may differentially stabilize or inhibit G-quad formation? How could this be addressed?

Discussion point: Gao et al., present data suggesting that Ten1 & Stn1, as well as RPA-2 & -3 bind preferentially, albeit weakly, to telomeric DNA. Why would it be beneficial for a telomeric region to be weakly bound to a protein that "caps it." Might it not leave the cell vulnerable to formation of a G-quartet Structure (see figure)? Does this imply that there are other factors that must be present to help stabilize the ends such that these structures do not form? 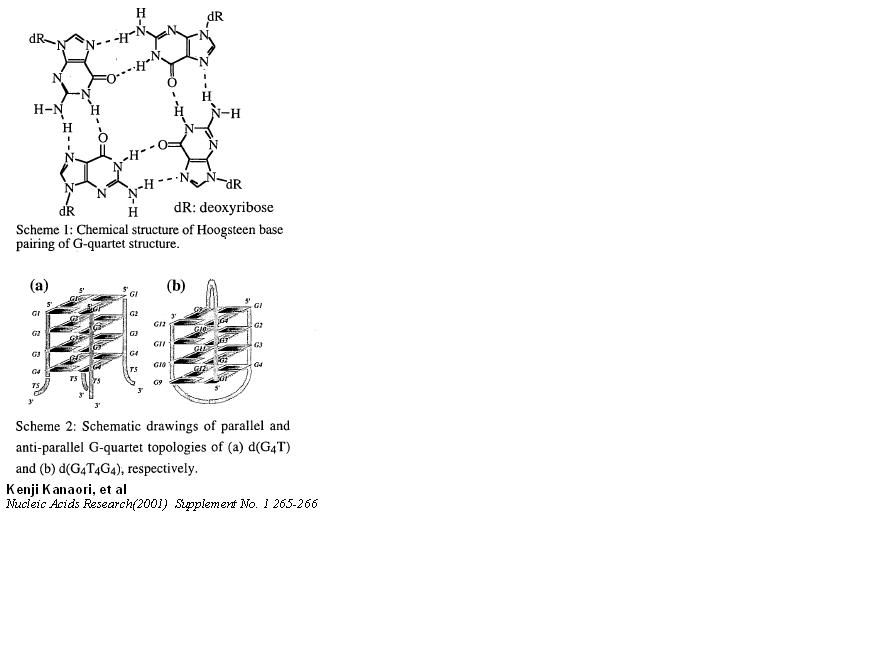 Q1. Propose an experiment that tests whether Stn1 and Ten1 do indeed bind DNA in vivo.

Q2. Also, what additional experiment would show that the substrates used in vitro are similar in structure to telomeres?

A1. Fluorescence anisotropy measurements using fluorescein labeled DNA and purified proteins is another useful method for assaying protein-nucleic acid interactions. Upon protein binding, the anisotropy of the DNA increases as reflected by differences in the amount of polarized light collected at left and right handed angles. This approach is often less cumbersome than EMSA, but can be less informative. For example, EMSA allows the direct observation of multiple binding sites and which nucleic acid population is bound by protein as indicated by it's gel mobility. For instance, double stranded and single stranded nucleic acid run differently on a gel - EMSA would indicate which population is shifted with protein.

Let's see if we can get Andy Bergland up here to discuss G quartet's etc, Interestingly... Jeremy's old boss and OWW colleague.