Lab 9: Series 3 - Induction of the Feeding Strain to Produce dsRNA and RNAi

To do on the day before the next lab: You and your partner will return to the lab to make an overnight broth culture of your selected colony as described below. This process will create a sub-culture of many identical copies of the bacteria containing the plasmid carrying the construct to RNAi the gene that you want to study.

Through reverse genetics we will deduce the function of a gene starting with its sequence and working back to its phenotype. There are many genes in the genome whose phenotype when mutated is lethal; therefore, it is very difficult to near impossible to tie function to a particular gene in the traditional forward genetics manner of creating random mutations, looking for phenotype changes, and then finding the defective gene responsible for that function.

In our reverse genetics study of an interesting C. elegans gene, two different strains of worms, wild-type and rrf-3 (RNAi enhanced), are fed bacteria expressing dsRNA specific to a particular worm gene. Ingesting dsRNA initiates cascade of events that leads to the destruction of the mRNA of the target gene. An altered phenotype in the progeny of RNAi-treated worms indicates what happens when the normal function of this gene is lost or significantly downregulated.

Double stranded RNA (dsRNA) can be introduced to the C. elegans cells in many different ways including: feeding, injection and soaking. Each of these methods has positives and negatives. We are using the feeding method - where we use genetically modified bacteria as dsRNA factories.

To begin to investigate the power of reverse genetics, you will need to grow your own induced bacteria to seed your plates for RNAi feeding.

To create the subculture of bacteria your cultures will be diluted 1:5 (1 mL of culture into 4 ml of LB + amp). To make enough induced bacteria for your experiment, each group will have two induced cultures. These cultures will be allowed to grow for three hours and then induced to make lots of dsRNA by adding IPTG to the culture and letting it continue to incubate for a few hours so the cell is full of dsRNA. The IPTG will compete with the repressors on the lac o promoter and remove them and allow the gene for T7 RNA polymerase to be transcribed and then translated into the RNA polymerase protein. The T7 RNA polymerase then binds to the T7 promoters on the pPD129.36 plasmid and transcribes our C. elegans lsy-2DNA into RNA! 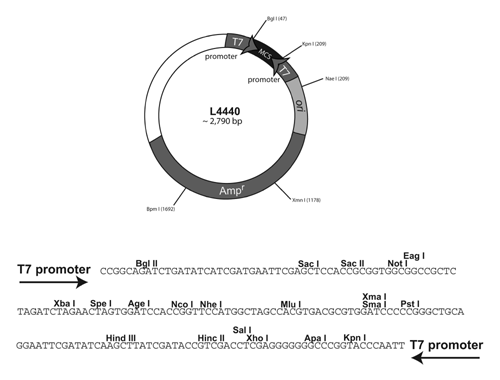 Another useful thing about E. coli strain HT 115(DE3)is that this particular strain is deficient for the RNAaseIII enzyme that degrades double stranded RNA (dsRNA) in the bacterial cell. This allows for the accumulation of dsRNA in the cell and, thus, our ability to induce and RNAi effect! This E. coli strain carries a tetracyclin resistance gene so these cells can be selected on media containing tetracyclin, while the plasmid contains an ampicillin resistance gene that allows only transformed cells to grow on media containing ampicillin.

Our goal is to upregulate production of dsRNA of our worm gene of interest in pPD129.36 plasmids containing that gene in HT115(DE3) bacteria.

To induce your cultures, the lab specialist or your instructor:

Preparation of the Chemotaxis Test Plates

Obtain from your instructor 8 unseeded salt plates. These will be your chemotaxis assay plates. With the lid on, draw the large unfilled and small filled circles on the bottom of the plate exactly as shown. Use the template your instructor will provide and make sure the distances are as the drawing below suggests: 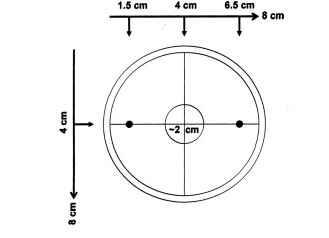 Once your plates are labeled wrap them with an elastic and a piece of your team tape and put them in the box provided by your instructor. The final steps to prepare these plates including the gradient will be described in the next lab.