Finding Evidence for Co-operation and Competition Among Cultured Members of a Soil Community; Id of Isolates by MALDI-TOF/Biotyper Analysis; Structural Diversity in Cultured Isolates

If you haven't been provided with a digital image, please take a photo of each of your interaction plates. Make sure that the photos are sharp enough to evaluate later. Upload them to Sakai so you and your partner(s) can access them later and/or email them to yourself and your partner(s).
A sample completed assay is shown below. 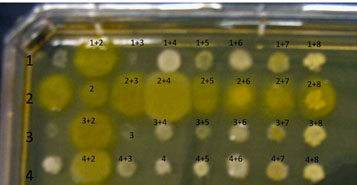 Observe the colonies on your plate, comparing any differences in the appearance of the colony growth of each isolate, alone vs mixed. Look first at each control culture: the inoculum in each of the diagonal spots is a pure culture control as are the spots in the column on the far left. Compare each "spot" where two isolates are mixed to the control spots where each isolate is growing alone. Is either isolate growing better in combination than alone? If so, you have found a beneficial interaction. For example, in the assay shown above, it appears that 1+4 grows better than either 1 or 4 does alone, a positive interaction for both isolates. Look at spot 2+4. It's hard to say what the presence of 2 does for 4 since isolate 2's heavy growth is making it hard to see what 4 is doing when in combo with 2. In contrast, 4 appears to be beneficial for 2. Isolates 2+8 appear to be grow equally well in combination as they do separately. We would not assess their relationship as either beneficial or antagonistic. Check carefully for combinations that show an inhibition in the amount of growth of either isolate compared to the growth of the control pure culture. (What do you think about the spot labeled 1+3?) When the growth of an isolate is worse in combination than alone that is defined as an antagonistic (negative) interaction for the slower grower. Note: When interpreting this type of assay, there are sometimes "edge" effects, differences in the appearance of the colony growth in the cultures along the perimeter of the plate as opposed to those growing in a more protected locations (such as the diagonal control colonies. This means that the pure cultures in the diagonal area are better controls that the column on the far left.


Spend some time with these plates, carefully and fully evaluating all possible combinations of your soil community isolates for as many as possible examples of mutualism or antagonism. If you got no growth on some of your spots that could mean a really negative interaction or, more likely, that you didn't get any inoculum off the frogger and onto your plate. You should be able to see a faint residue where the inoculated culture dried onto the broth to indicate that you did, in fact, inoculate the plate. If you don't see that residue, the frogger probably missed it and you can't evaluate those combinations. Record your results in your lab notebook with copies of the photos of your plates.

If you have evidence for interesting interactions, please show them to your lab instructor so they can be shared with the class.


Take photos of any plates that show evidence of the presence of antibiotic producers in your soil community. If you found that your isolates did not appear to cause measurable inhibition of growth, does that mean that your isolates do not interact? Explain?

Complete the Motility Assessment & Analyze the Results
Soft Nutrient Agar Deep Medium
Nutrient Agar is used but the agar content is reduced to 0.35% Bacteriological Agar as opposed to the usual concentration of 1.5%

MOTILITY ASSESSMENT
Look for radiating growth around the stab line of inoculation of each isolate in each of your soft agar deeps. Motility detection is possible due to the semisolid nature (low concentration of agar) of this medium. Growth radiating out from the central stab inoculation line indicates that the test organism is motile. First hold an E. coli positive control tube up to the light to see an example of positive radiating growth. Growth appears cloudier than the medium. Compare your positive control to an uninoculated tube and to a negative control culture of a non-motile organism. Non-motile bacteria exhibit growth in a tighter, defined line that is limited to where the organism was inoculated. In contrast, motile organisms exhibit detectable growth radiating away from the stab inoculation line towards the periphery. Strictly aerobic organisms may show more growth radiating down from the surface of the medium compared to the growth deep in the tube. Consult with your instructor if you are having a hard time deciding whether or not your isolates are motile. Why might it be useful for some soil community members to be motile?


Using log phase (24 hour) cultures of your isolates you will learn how the MALDI-TOF Biotyper works to identify your microbes using a different reference standard than our other ID method (comparison of 16s RNA gene sequences). This method compares particular proteins by mass spectrometry to reference standards. You need freshly grown cultures of your isolates today made 24 hours prior to this lab. If you have one or two very slow growing cultures, you need to allow enough time to have a small but visible colony on your plate.

Glossary
MALDI is the abbreviation for Matrix Assisted Laser Desorption/Ionization
TOF for Time of Flight.
Matrix is a chemical substance which will assist the sample ionization process and must be crystallized in a sample compound on the target surface. Common matrix substances are:

MALDI-TOF The samples which are measured for MALDI Biotyper application are typically the Proteins of Bacteria, Fungi and Yeast. The mass and distribution information will be used for identification.

By firing with a laser (on microflex a nitrogen uv laser with a wavelength of 337 nm) on the prepared matrix-sample compound the matrix will be vaporized. The sample will be entrained and ionized. The matrix and sample ions will be accelerated in an electrical field as the target plate is under high voltage of up to 20 kV against to an arranged ground potential.

Via the flight time between acceleration and hitting the detector the mass of an ion can be determined (TOF = Time of Flight technique). The complete process needs to take place under vacuum of better than 3*10-6 mbar. As better the vacuum as less collisions

To avoid influences of temperature, mechanical and electrical deviations and special techniques for acceleration the instrument needs to be calibrated before measuring unknown samples. To do this a mixture of known samples will be measured and an assignment between flight time and theoretical mass will be done.

The achievable resolution depends on the speed of the detector and the speed of converting the analog signals to digital signals. On microflex a 500 MHz digitizer which achieves a distance from 2 ns between data points (in 2 ns the light covers a distance of just 60 cm) is used. With a special digitizer function provides actually a calculated ‘pseudo’ 2 GHz sampling rate. Mainly influencing variables are also the applied laser energy, the drift distance and the electrical field distribution.

Definition and calculation of mass resolution
The mass resolution for a single peak is calculated by dividing the peak mass by the Full Width at Half Maximum (FWHM). The resolution value can be checked in flexControl and flexAnalysis directly.

Linear mode The ionized sample will be accelerated in an electrical field between the target plate and the acceleration electrodes. Followed by ‘drifting’ to a field free region and finished by hitting the detector.

Delayed extraction:
Next step was to use a delayed extraction to accelerate ions (pulsed ion extraction - PIE). Between target plate and ground plate a second potential plate (P2) is placed to modify the electrical field. The P2 plate has the same potential as the target plate. So no acceleration will happen after generating the ions. After a delay time, the P2 potential will be decreased and the acceleration starts. The fortune is that the effect of loosing resolving power because of different kinetic energy of equal ions will be reduced. A higher resolution for a small mass range can be observed.

A further advancement could be reached by optimizing the pulse shape applied to the P2 plate. With the now called PAN (panoramic) mode a high resolution over a brought mass range will be reached.

Electrical Lens:
The ion lens is located on ion optic behind the acceleration electrodes and applies a small vectored electrical field to focus the ion cloud for better resolution.

The Bruker MALDI Biotyper requires organic acid solutions to: 1) prepare the Bacterial Standard (BTS) and HCCA (matrix): 2) complete the Formic Acid Extraction process; and 3) to clean the Polished Steel Target.
Preparing your isolates for MALDI-TOF MS
Formic Acid Isolate Extraction
Principle: In some microorganisms it may be necessary to break down the cell wall and separate the ribosomal proteins prior to spectra analysis.

TARGET LOADING:
1. Prepare a MALDI Target Worksheet with appropriate sample identification, assigning the first two target spots for BTS (QC) and the rest for each isolate to be analyzed.
2. Inoculate 1 µL of each Isolate Formic Acid extract supernatant (avoid touching the pellet) onto the target spots indicated on the Target Worksheet.
3. Once all the isolate extracts are loaded.
4. One student will place 1μL of BTS on each of the 2 BTS spots.
5. Air Dry all spots at Room temperature.
6. Immediately after BTS spots (and all other spots) are dry, overlay all spots with 1 µL of HCCA (Matrix) (to avoid oxidation of the standard). Once the HCCA is uncapped work quickly to avoid evaporation!!!
7. Be sure the target plate is completely dry before placing the Target plate in the MALDI-TOF.
8. You are ready to analyze your isolates using the MALDI-TOF MS. 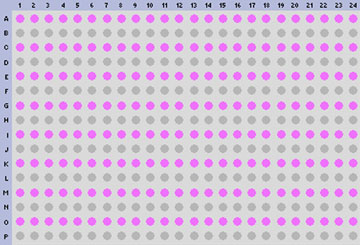 Graded Assignment:
There is no assignment due in Lab 9:) We will have a workshop on processing and analyzing your culture independent DNA sequencing data. Please bring your laptop computer to lab with you.
There will be a Lab Practical in Lab 10. If you would like to get a head start in studying for it, information can be found at Lab Practical.