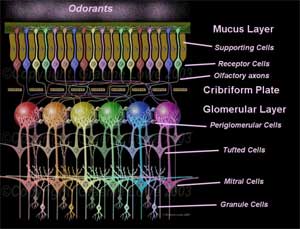 The molecular basis of olfactory receptor cell targeting to the proper glomeruli has long intrigued developmental biologists, and initial observations of the three-dimensional structure of olfactory receptor proteins hinted that the receptors themselves might mediate the requisite cell-cell interactions involved in axon guidance. Experiments by Mombaerts and colleagues aimed to demonstrate such a role for olfactory receptors during development. By genetically switching receptors, they were able to observe mistargeting of the axons, but the results were difficult to interpret. Cells with swapped receptors were targeted neither to the correct location nor to the location of the swapped receptor; instead, they wound up somewhere in between. It would thus seem that the targeting process is only partially dependant upon the receptor and that other molecular factors (perhaps including cell-adhesion molecules, cell-surface carbohydrates, and even endogenous second messenger molecules like cAMP) are likewise involved.

A recent paper by Serizawa et al. characterizes some of the molecular mechanisms involved in the formation of the olfactory glomerular map. In particular, they discovered that the expression levels of the homophilic adhesive molecules Kirrel2 and Kirrel3, and the repulsive molecules ephrin-A5 and EphA5 correlate in complementary ways with the expression of different olfactory receptors in different olfactory sensory neurons. Evidence that these molecules help to sort the projections of olfactory sensory neurons to appropriate glomerili comes from gain of function mosaic analysis experiments in which the expression of each of these genes in particular olfactory sensory neurons is sufficient to produce duplicated glomeruli. This finding parallels earlier studies showing that neuro-attractants and repellants are involved in the formation of retinotectal topographic maps in the visual system, suggesting similar mechanisms in the two different sensory systems. Moreover, the four genes investigated by Serizawa are transcribed in an activity-dependent manner, suggesting that sensory experience (or at least spontaneous activity) may play a key role in the formation of the olfactory glomerular map.

As with all of the other cortical organizations, the precise role played by these glomeruli remains elusive. However, a few suggestions seem reasonable. Since olfaction has been shown to be a combinatorial process, the gathering of single receptors to single glomeruli might allow for a glomerular firing pattern to be spatially decoded into the perception of a certain smell. Excitatory feedback in mitral and tufted cells has also been proposed to enhance sensitivity and improve the signal-to-noise ratio, an essential element of a diffusion-based sensory modality. Contrast, meanwhile, may be enhanced by GABAergic interglomerular projections, although the precise meaning of this in the context of a discrete, rather than graded, perceptive experience is unclear.

Glomeruli consist of many distinct elements that differ in their chemical properties, as determined by immunocytochemical and neurochemical analyses. Morphologically indistinguishable neurons are sometimes found to have significant chemical differences, complicating the task of characterizing cell types. While Halász suggested that the periglomerular cells "seemed to be a farily homogeneous group," studies by Kosaka et al. of the colocalization and/or relationship of substances in rat MOB neurons indicate that about half of the periglomerular neurons belong to three chemically-defined groups: GABA-LIR, CR_IR, and CB-IR cells, with TH-IR, TRH-LIR and ENK-LIR neurons regarded as their subpopulations. Structural analysis also detected prominent differences between periglomerular cells w.r.t. features such as dendritic arborization patterns and their synaptic contacts in the glomeruli. These results show that periglomerular cells in fact consist of several different subpopulations, implying that glomerular organization is more complicated than originally believed.