Cells can be considered miniature machines. They use energy to make things, record events, move around, and modify their environment. They differ from standard, mechanical machines in ways that will be further explored in the BE.109:Systems engineering experimental module, but for today consider the remarkable and useful fact that you’re working with a protein-making factory. Under the right conditions, the majority of each cell’s protein output can be the protein you’re most interested in. Though each cell is only microns in size, it’s easy to grow lots of them to yield microgram quantities of protein. Most astonishing of all is the ease with which experimental conditions can be changed to affect the protein output in rational and defined ways. The protein of interest can be turned on or off, modified or not. You did this when you added IPTG with or without an unnatural amino acid to your growth media. Today you will assess the consequences of these manipulations. 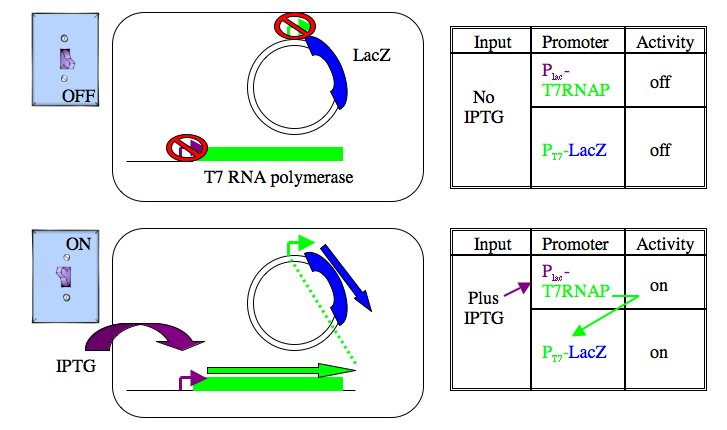 Methods for protein overexpression are of more than academic interest since a number of human diseases arise from defects in protein production. Type I diabetes, for example, occurs when pancreatic cells are unable to make insulin. Diabetic patients must regularly treat themselves with shots of insulin to provide the missing protein. Until the 1970s, insulin was isolated from slaughtered pigs (the pig and human versions of this protein differ by only one amino acid). This method for insulin production was laborious, inefficient, and unreliable. One of the earliest examples of DNA engineering came in the 1970s when the human insulin gene was inserted into a bacterial expression vector, allowing the human gene to be expressed by the bacteria. Now most diabetics use insulin purified from such over-producing bacteria.

Today you will assess the over-production and modification of beta-galactosidase in the three samples you induced last time (no IPTG, plus IPTG, plus IPTG and plus some unnatural amino acid). First, you will perform a beta-galactosidase assay to compare the enzyme activity in these cells. This assay will be familiar to you from last time, though you’ll see there are some modifications that must be made to the protocol and calculations when whole cells are used instead of purified proteins. Second, you will examine the protein expression profile in each of your samples using an acrylamide gel to separate proteins in a way similar to the way agarose gels separate DNA. Finally, you harvest some cells to store for next time when you will try to purify the beta-galactosidase enzyme.

Before you start any of the experiments today, you must first determine how many cells you have in each of your samples. Transfer 0.5 ml to plastic cuvettes and measure the OD600 of each, blanking the spectrophotometer with water or M9, then convert the optical density to a concentration using the approximation that 1 OD600 is ~1x109 cells/ml.

There are some important differences in protein and DNA gel electrophoresis. One thing you’ll notice right away is that the gel itself is different. DNA molecules are typically separated thorough an agarose matrix where as acrylamide is used for proteins. Both are porous sieves that retard molecules based on their length, with smaller molecules moving through the matrix faster than longer molecules. Agarose gels are run horizontally and acrylamide gels are set in the tank vertically but gravity has nothing to do with either separation. Electrical poles draw the charged molecules through the matrix. Unlike DNA, proteins do not have a uniform charge so before electrophoresis they are coated with a charged molecule (called SDS) to add negative charge proportional to their length. You could expect proteins of identical length but folded into different shapes to separate differently (not the desired outcome) so proteins are also unfolded before they are loaded on a protein gel. This is done by boiling them in the presence of a reducing agent, breaking disulfide bridges and denaturing the protein. The last notable difference in DNA and protein electrophoresis is the visualization techniques used to find the molecules once they’ve passed through the gel. Recall that DNA was visualized with Ethidium Bromide, an intercalating dye that changes its fluorescence when bound to DNA. Proteins can be detected with Coomassie stain, which detects abundant proteins in the gel, turning them blue. Other more sensitive techniques are available for staining protein gels (for example silver stain). The proteins can also be transferred from the gel to a membrane and probed with an antibody specific to a protein of interest. This last technique is called a Western blot. 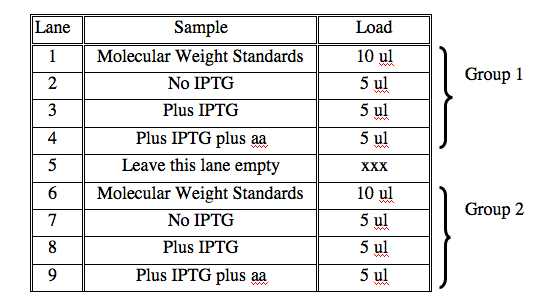 With this assay you will determine the amount of beta-galactosidase activity associated with each sample of cells. You will perform assays of each sample in triplicate to gain some confidence in the values you measure. A table is included here to help you organize your assay, but you can make one of your own if you prefer. 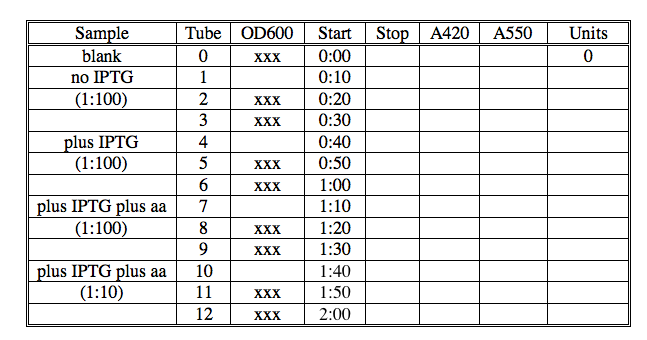