β-Galactosidase is encoded by the lacZ gene of the lac operon in E. coli. It is a large (120 kDa, 1024 amino acids) protein that forms a tetramer. The enzyme's function in the cell is to cleave lactose to glucose and galactose so that they can be used as carbon/energy sources. The synthetic compound o-nitrophenyl-β-D-galactoside (ONPG) is also recognized as a substrate and cleaved to yield galactose and o-nitrophenol which has a yellow color. When ONPG is in excess over the enzyme in a reaction, the production of o-nitrophenol per unit time is proportional to the concentration of β-Galactosidase; thus, the production of yellow color can be used to determine enzyme concentration.

So, why do we care? Usually, experiments are designed so that the β-Galactosidase concentration in the cell is a readout for some aspect of a system being studied. For example, an investigator may fuse a promoter to the lacZ gene and use β-Gal levels as a readout for promoter activity under various conditions. In 1972, Jeffrey Miller published "Experiments in Molecular Genetics" which contained a protocol for determining the amount of β-Gal with ONPG. Because of this, ONPG/β-Gal assays are referred to as "Miller" assays, and a standardized amount of β-Gal activity is a "Miller Unit".

†Note that this value is different for each spectrophotometer used and should be calibrated by plating dilutions of known Abs600 cultures to determine the colony-forming units per Abs600.

In his book, Dr. Miller explains that this formula yields approximately 1 Miller Unit for uninduced E. coli (low β-Gal production) and approximately 1000 units for a fully induced culture (grown on lactose or IPTG).

In my experience, cultures of MG1655 induced with 1 mM IPTG in log phase have 1500-1800 Miller units. The reason for the difference is not known, but I suspect it stems from differences in the Abs600/cell density between Dr. Miller's spectrophotometer and the one I use and the fact I do my Miller assays at 30 °C (for convenience) whereas Dr. Miller performed his assays at 28 °C. I have made promoter fusions that generate ~40,000 Miller units; however, as will be discussed below, this is too high for the assay and so the protocol was changed to lower this value.

The protocol I use is derived from a paper by Zhang and Bremer (JBC 270, 1995, Free full text!) in which the original Miller protocol was greatly simplified to allow more samples to be measured with less manipulation.

In short, the protocol consists of measuring the cell density of a culture of bacteria (Abs600), then removing an aliquot of the cells from the cuvette and mixing them with a "permeabilization" solution that contains detergent which disrupts the cell membranes (but leaves the β-Gal intact). This kills the cells and stops translation. After incubation, an ONPG "substrate" solution is added and the yellow color allowed to develop. A "stop" solution is then added and the absorbance of o-nitrophenol is measured.

The sample is now stable for several hours. This allows you to perform time-course experiments.

Comments on the assay 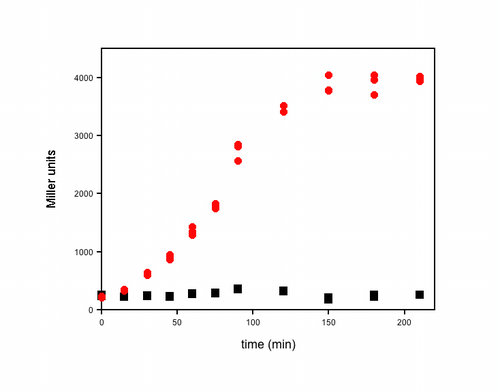 (The Zhang protocol also has 20 μg/mL CTAB and 10 μg/mL deoxycholate. I leave these out figuring that there is still plenty from the permeabilization solution and, if they ain't dead yet, they ain't gonna be.)

The high pH of the stop solution denatures the β-Gal and approximately doubles the yellow color of the reaction.