The purpose of the assignment is to build a foundational understanding of microarrays and the implications of gene induction and repression. Being able to interpret microarray data will be essential for constructing biomathematical models to represent the types of relationships present within this assignment.

(Question 5, p. 110) Choose two genes from Figure 4.6b (PDF of figures on Brightspace) and draw a graph to represent the change in transcription over time. You can either create your plot in Excel and put the image up on your wiki page or you can do it by hand and upload a picture or scan. 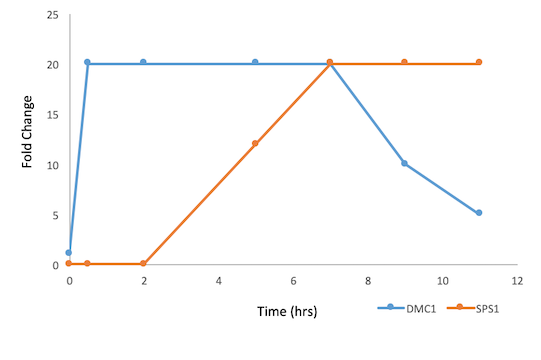 (Question 6b, p. 110) Look at Figure 4.7, which depicts the loss of oxygen over time and the transcriptional response of three genes. These data are the ratios of transcription for genes X, Y, and Z during the depletion of oxygen. Using the color scale from Figure 4.6, determine the color for each ratio in Figure 4.7b. (Use the nomenclature "bright green", "medium green", "dim green", "black", "dim red", "medium red", or "bright red" for your answers.)

(Question 9, p. 118) Why would most spots be yellow at the first time point? I.e., what is the technical reason that spots show up as yellow - where does the yellow color come from? And, what would be the biological reason that the experiment resulted in most spots being yellow?

Most spots will appear yellow at the first time point because there has been no change from the initial condition. The biological reason for most spots appearing yellow is that the gene is equally expressed and repressed under the control and experimental condition. Technically speaking, when cDNA is labeled red for gene expression under experimental conditions and cDNA is labeled green for gene expression under control conditions, the combination of green and red will appear as a yellow spot.

(Question 10, p. 118) Go to the Saccharomyces Genome Database and search for the gene TEF4; you will see it is involved in translation. Look at the time point labeled OD 3.7 in Figure 4.12, and find the TEF4 spot. Over the course of this experiment, was TEF4 induced or repressed? Hypothesize why TEF4’s change in expression was part of the cell’s response to a reduction in available glucose (i.e., the only available food).

TEF4 was repressed throughout the experiment. TEF4’s change in expression could have been part of the cell’s response to low glucose availability because TEF4 is involved in transcription of mRNA into amino acid sequences to produce peptides, without glucose the cell would repress this gene because there was not enough available glucose to produce enough energy for proteins to be synthesized.

(Question, 11, p. 120) Why would TCA cycle genes be induced if the glucose supply is running out?

The TCA cycle would be induced if the glucose supply is running out because the cell has to find alternative pathways to produce energy, since glucose is unavailable. It makes sense that TCA cycle genes would be induced if glucose is running out because through gluconeogenesis, the cell can convert other molecules into glucose to be used for energy. The induction of pyruvate decarboxylase that shifts pyruvate transition towards oxaloacetate rather than acetaldehyde because oxaloacetate can initiate gluconeogenesis to produce phosphoenolpyruvate. It is important that genes for phosphoenolpyruvate carboxykinase and fructose-1,6-biphosphatase are induced in order to produce glucose. These steps require different enzymes than the forward process of glycolysis, so these genes must be induced to successfully produce glucose.

(Question 12, p. 120) What mechanism could the genome use to ensure genes for enzymes in a common pathway are induced or repressed simultaneously?

Having regulatory proteins that control transcription of multiple genes would allow enzymes in a common pathway to be induced or repressed simultaneously. In eukaryotic cells each gene is regulated by multiple molecules at the same time allowing the expression or repression of numerous genes with a confined amount of transcription factors.

(Question 13, p. 121) Consider a microarray experiment where cells deleted for the repressor TUP1 were subjected to the same experiment of a timecourse of glucose depletion where cells at t0 (plenty of glucose available) are labeled green and cells at later timepoints (glucose depleted) are labeled red. What color would you expect the spots that represented glucose-repressed genes to be in the later time points of this experiment?

The spots later in the experiments would be expected to show up as red. Cells lacking TUP1 would still induce glucose-repressed genes independent of the amount of glucose present.

(Question 14, p. 121) Consider a microarray experiment where cells that overexpress the transcription factor Yap1p were subjected to the same experiment of a timecourse of glucose depletion where cells at t0 (plenty of glucose available) are labeled green and cells at later timepoints (glucose depleted) are labeled red. What color would you expect the spots that represented Yap1p target genes to be in the later time points of this experiment?

I would expect the spots to be red because the over expression of factor YAP1p would transcribe many target genes even as glucose levels start to drop.

(Question 16, p. 121) Using the microarray data, how could you verify that you had truly deleted TUP1 or over-expressed YAP1 in the experiments described in questions 8 and 9?