This challenge was inspired by This American Life #354: Mistakes Were Made


The poem is often taught in poetry classes and often spoofed. Consider, for instance, these 2 spoofs by Kenneth Koch:

I chopped down the house that you had been saving to live in next summer.
I am sorry, but it was morning, and I had nothing to do
and its wooden beams were so inviting.


And one more spoof from the blog somewhere in the suburbs


If you wanted to write your own spoof of the William Carlos Williams poem, you might begin by comparing the structure of these four poems. As a starting point they can be broken into 5 elements, namely

For each poem, these elements are:

Now we can try to swap these poetic elements to see what interesting and clever spoofs we write. How about:

That seems to work but is it better? Let's try again:

Well shoot, that's horrible. For one thing: It doesn't say anything understandable---this can be broadly described as a problem of functional compostion. For another thing: the connection between the different elements is, well, "awkward" at best---this can be broadly described as a problem of physical composition. If physical and functional composition of poems were working perfectly then every part would grammatically connect to the ones that flank it, and the meaning of the connected pieces would be interpretable at worst and clear at best.

The physical and functional assembly of the poetic parts can be mapped to biological engineering once we define what a genetic "part" is. Let's start by extending what we did with the William Carlos Williams poem, namely let's consider a few natural genetic compositions, see what common elements compose them, and then try to bin these so we might compose new genetic elements by mixing and matching parts.

The bacterial lac operon is one we're already familiar with from our conversation earlier in the term.

Recombinant DNA technology gives us great power to move pieces of DNA around but it doesn't answer all the questions we might have about the resulting composition. For instance, are promoters/operators/genes and terminators all the parts we need to write a genetic program. Would the promoter that's in front of LacI make sense in front of LacZ, Y, and A? Is there something important about the junction of the parts? An introduction to systematic examination and nomenclature of genetic parts, watch Device Dude and Systems Sally's introduction to Parts

The animation ends with a screen shot from the BioBricks Foundation a not-for-profit organization that "encourages the development and responsible use of technologies based on BioBrick™ standard DNA parts that encode basic biological functions." BioBricks™ represent one kind of standard biological parts, standardized to enable reliable physical composition.

Just as we could identify "forgive me"-ish elements in the "this is just to say poems" we can see common elements in these genetic compositions: the green arrow element which is = a promoter, but which comes in different flavors (I13452, R0040 or R0011), the red stop signs = transcriptional terminators (B0010, B0012).

The part numbers as well as the DNA itself are collected at the Registry of Standard Biological Parts.

For your final project in this class, you will enter a part into the registry. We'll look at some good parts and some good documentation in class so you can model your work on those examples.

If there are outstanding issues related to the system you're working on for your project be sure everyone on your team knows how you'll solve the issue(s) and make a plan to come to studio tomorrow with materials for finishing the system overview and getting good work done on the device list and the timing diagram.

Aye yay yay! Won't we ever get away from this Eau d'E coli project? Not yet! Take a close look at the device-level system diagram. You can't see all the underlying BioBrick parts (there are ~24 parts in total). If you were the designer of this system, do you think that the system would work if you just synthesized all the DNA as a single contiguous strand, transformed this new DNA into a cell, and let your genetic program rip!? Or, stated differently, what would be your next step if you tried to get everything working at once, and NOTHING HAPPENED, or, even worse, your engineered DNA killed the cell?

Consider once more the Melbourne 2007 iGEM project. In a series of questions at the end of their presentation, the team gets asked about any changes to the gas vesicles device that might allow gas-filled cells to become even more buoyant. Their answer speaks to some scientific work others have done to understand the vesicle-encoding operon, research that has shown at least one gene in the operon is a negative regulator. By deleting that gene, the Melbourne team thinks they might make their cells even more buoyant. If you and your team were the Melbourne team, what would you do with this information?
First let's review one technical advance that opens a number of options for you, namely DNA synthesis. Then as a class we'll consider some options--weighing these (or others) in terms of their associated cost (both time and money).

Now it's time to look at the list of devices you have identified as part of your project (some of you may have a full list of needed devices and some of you will have only a partial list, in which case you'll have to consider these ideas now and then revisit them when your device list is complete). What might factor into the cost and time of assembling the devices into your working system? Do you know all you need to know about how they work? Are there easy ways to find out more? Do the devices already exist or will you have to make them yourself? You might want to make a chart that lists your degree of confidence in each device, where confidence is tempered by its cost/time/source/description and perhaps safety/security concerns...something we will return to next week.
Generate a list or table that might be useful as part of your Tech Spec Review next week.

Let's get busy working on the details of these projects!

“Faith is a poor substitute for reason” Thomas Jefferson

As you hone in on the details of your projects, your team should plan ways to validate the system's operation and ways to learn from its glitches. We have two quick challenges for you today. The first illustrates that even the "best" answers you can offer that are consistent with all available data remain tentative, that the answer is either strengthened or revised by additional data and that all interpretations are subject to personal biases, human values and the various ways we all think about the world. The second challenge puts you midstream in a flawed design and requires that you consider the modes of failure to debug/troubleshoot the problem.
We will spend only 20 minutes on these challenges and then you and your team can use the rest of today's lecture time to prepare for next week's Tech Spec Review.

Challenge 1: The check's in the mail

This challenge is adapted from Judy Loundagin's lesson, here.

Finally, the spokesperson should say what kind of check they would expect to see in the envelope if their scenario is correct OR what kind of check would blow their ideas out of the water and demand a full re-write of their explanation.

Compressional stress on a cube

Tensional stress on a cube

Shear stress on a cube

This challenge is adapted from one described at teachengineering.org. We will skip the preliminary descriptions of plate tectonics and just remind you of three stresses that give rise to deformation: compression, tension and shearing forces. 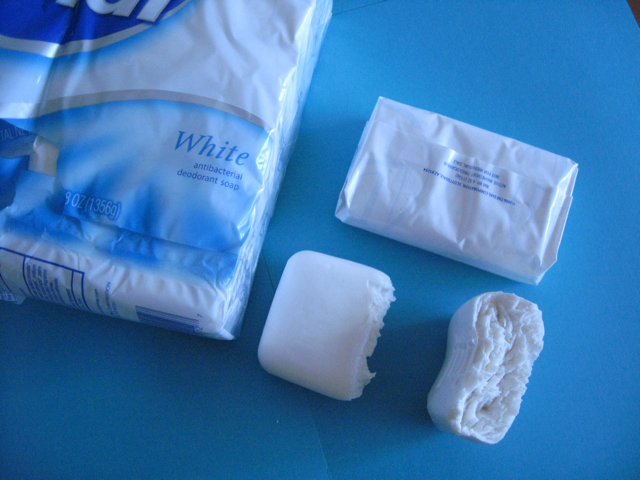 In 5 minutes, your team will be asked

Be sure to wash your hands before you touch your eyes if you've been breaking soap to test it.

Mapping these challenges to your project

There is no such thing as either complete knowledge or flawless design. And if you believe, as Henry Petroski does, that "...the central goal of engineering is still to obviate failure, and thus it is critical to identify exactly how a structure may fail." (pg 195 in To Engineer is Human), then you and your team will dedicate effort