In an effort to optimize efficiency in our solar cells, we will test and compare three sets of nano-composites of titanium dioxide nano wires. Each set contains aligned gold nanoparticles of varying size inside the wire core. M13 phage that can create these structures were discovered by using a combinatorial approach of panning and bio-templating. 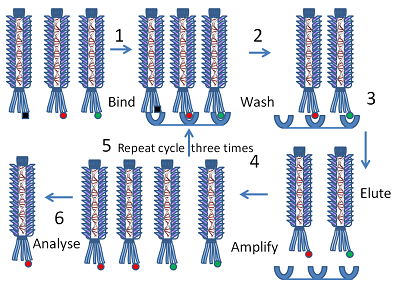 If you are interested in more information about biotemplating, you may want to consult this review article: [1] Sotiropoulou, Sofia, et al. "Biotemplated Nanostructured Materials." Chemistry of Materials 20.3 (2008): 821-834.

Eventually, we'll build a solar cell where the photoanode is made from the material that we're synthesizing today. By templating the assembly of the Au/TiO2 nanocrystal with the M13 phage, the electronic properties of the photoanode are improved. 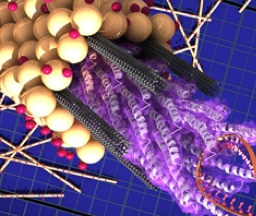 "Improved" here means a few things, which we'll discuss more deeply on Day 4. Briefly, engineers trying to optimize photovoltaic devices want many high mobility electrons inside their devices to efficiently convert the photo-energy input to electrical power output. Gold nanoparticles increase the fraction of collected light that is usable for excitation, while SWNT (single wall nanotubes) allow for fast electron movement and reduce dead-end recombination events. In the control devices that Cherry and David are preparing, we will rely on M13 to facilitate electron paths by arranging the SWNTs into a higher-order architecture, thereby improving collection efficiency further. Not only can M13 bundle the SWNTS so they don't clump together (see how the p8 proteins allow the SWNTs to associate in parallel to the phage in the photo), but the viruses also position parts of the SWNTs to the surrounding solution, allowing for a more complete coating with TiO2. The TiO2 nanocrystal shell (like its more expensive silicon cousin) is needed to pass the electrons from the photo-excited dye...which we'll be adding later.

Today in lab you will react your Au:phage with titanium isopropoxide, harvest a small aliquot to visualize with TEM next time, and then wash the remainder of the nanowires several times – first with ethanol, and then with water. You will have time during these steps to work on the FNW, a first step toward developing a research proposal idea. Next time, you'll share your FNW findings with your partner.

Today's lab has some safety hazards and you must work extremely carefully. Lab coats, gloves and goggles are a must when you're at the chemical hood. The reaction of the complexed phage with the titanium will take place in the hood at supercooled temperatures (a bath at ~ -40°C). Once the titanium has been deposited on the surface of the phage, the solution is less hazardous, though you should still treat the materials with care since no reactions run to completion. 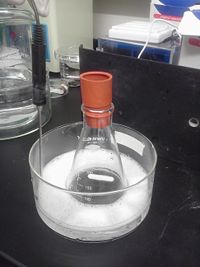 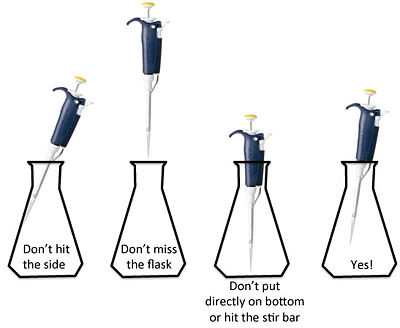 How to add the Ti(I-pro)4 and phage like a pro. Be sure not to hit the stir bar!!

Each group should prepare a TEM grid (so there might be replicate grids for each size gold particle). This will allow for some duplicates to be visualized in case the grid is damaged or different kinds of EM are being performed. 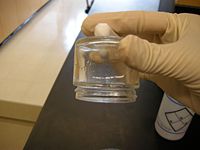