Today you will become intimately familiar with the plasmid reporter assay for measuring NHEJ that we will use in Module 2. You will examine the different elements present in the plasmid, and more importantly you will try to reconstruct some of the design choices that were made when different variants of the reporter were conceived. We will also continue learning about Ku80, this time through a class-wide discussion of a recent research article on the role of Ku80 in lung cancer. 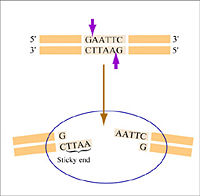 EcoRI cuts between the G and the A on each strand of DNA, leaving a single stranded DNA overhang (also called a “sticky end” or cohesive end) when the strands separate.

Notice that EcoRI leaves a 5' overhang on either DNA strand; some restriction enzymes leave 3' overhangs instead. Still other restriction enzymes cut precisely in the middle of the palindromic DNA sequence, thus leaving no overhangs after digestion. As you may recall from Module 1, the single-stranded overhangs resulting from DNA digestion by enzymes such as EcoRI are called "sticky" or cohesive ends, while double-stranded ends resulting from digestion by enzymes such as HaeIII are called blunt ends. HaeIII recognizes

In its simplest description, our reporter assay works as follows: a blue-fluorescent-protein-expressing plasmid is cut by a restriction enzyme(s), then transfected into cells, and repaired at some frequency that we evaluate by measuring the blue fluorescence of said cell population. In fact, the assay design is more subtle than this description encompasses in several respects. The high-level design considerations that we take into account include accuracy of the assay (both technical and biological) and its ease of use. To be confident of the technical accuracy, the assay design includes a second reporter – this time green fluorescent protein – as a transfection control. There is also a control for variable expression of GFP versus BFP, which we will discuss in more detail on Day 5. As another bit of internal validation, one that helps us avoid wasting time with failed products, we have a way to test for successful digestion of the BFP plasmid. Finally, as an example of ease of use, in cases where we cut with multiple restriction enzymes, convenience demands that they are compatible with the same buffer system. We'll dig into some of these considerations further below, and others when we return from spring break.

As described in the Day 2 FNT, we will be discussing the paper from Zhang lab in class today.

The main technical topic that may be unfamiliar to (some of) you is the use of short interfering RNA (siRNA). RNA interference, or RNAi, is a post-transcriptional silencing mechanism. You may have heard of gene "knock-outs" before, and in fact xrs6 are essentially Ku80 knock-outs: the DNA sequence is deleted or modified so as to be non-functional. In contrast, RNAi is usually not as potent, and hence is called gene "knock-down." Here the DNA sequence is normal, and mRNA is transcribed – but it is bound up or destroyed before it can be translated. You can read more about the intricacies of RNAi at Scitable.

The following questions will guide our in-class discussion; consider them as a starting point rather than a check-list.

By now you should see that pMax-BFP has a restriction site that produces blunt ends upon cutting. With respect to assay ease of use, blunt ends are convenient because the associated DNA requires minimal or even no purification after digestion. In contrast, after digestion that produces cohesive ends, it is wise to get rid of the tiny fragments, lest they fill back in on the plasmid and change re-ligation efficiency.

For our study, however, we are interested in comparing many different kinds of digested ends. Given that we are performing extra steps anyway, wouldn't it be nice to be confident that we successfully cut our DNA? Based on techniques you learned in Module 1, think about how you might accomplish this validation. We'll come to the answer a little later.

In order to create various digested ends, we will design an extended MCS. It is important that the restriction enzymes that we pick don't occur somewhere else in pMax or in the BFP code-determining sequence. Why? To find these restriction enzymes, we will use another tool from NEB, namely NEBcutter.

We eventually jettisoned the last consideration, when in a planning meeting we came up with an idea for validating DNA cutting. Did you think of any ideas yet? Take a moment to brainstorm… We decided that instead of making one MCS, we would make two, and that these would be separated by a nonsense DNA fragment large enough to see on a gel. For example, we might cut with a sticky enzyme in the left-hand MCS (hereafter MCS1), and a blunt enzyme in the right-hand MCS (hereafter MCS2), creating a hybrid break site. Afterward, the DNA could be run on a gel, both to validate cutting (by observing release of the nonsense fragment), and to isolate/purify the cut plasmid reporter. But how should we deal with a more simple cut topology, such as sticky alone or blunt alone? Aha! The same restriction site should be present in both MCS1 and MCS2.

On today's Talk page, please sign up for one of the seven cut topologies that are available. We will confirm which enzymes result in which topologies soon, so you can complete your FNTs, but for now don't worry about this detail.