As you heard in lecture, we’ll be starting a project to study homologous recombination. For basic information on homologous recombination, please read the excellent review by Thomas Helleday from the References section of the Module 1 frontpage. Also, be sure to check out the animations made by Justin Lo, a class of '08 Course 20 student and a former UROP student in Professor Engelward's laboratory! We'll begin this module with a plasmid construction project, schematically shown in the figure labelled "Experiment roadmap."

By performing this plasmid construction, you will learn some fundamental tools and techniques used in molecular biology. One major goal for this module is for you to establish good habits concerning the documentation of your work. These good habits will allow you to:

To begin your recombination study you will be using a method called the Polymerase Chain Reaction (PCR). The applications of PCR are widespread, from forensics to molecular biology to evolution, but the goal of any PCR is the same: to generate many copies of DNA from a single or a few specific sequence(s) (called the “target” or “template”).

In addition to the target, PCR requires only three components: primers to bind sequences flanking the target, dNTPs to polymerize, and a heat-stable polymerase to carry out the synthesis reaction over and over and over. PCR is a three-step process (denature, anneal, extend) and these steps are repeated 20 or more times. After 30 cycles of PCR, there could be as many as a billion copies of the original target sequence. 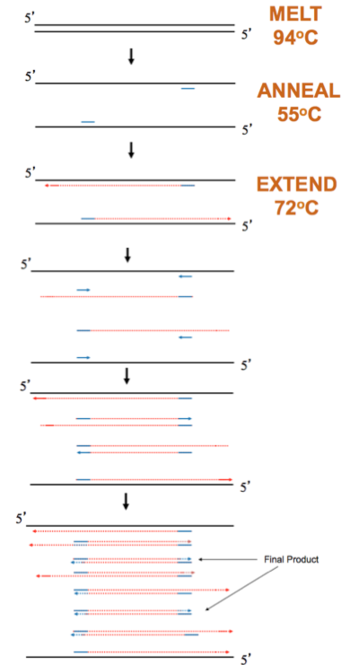 Based on the numerous applications of PCR, it may seem that the technique has been around forever. In fact it is just over 30 years old. In 1984, Kary Mullis described this technique for amplifying DNA of known or unknown sequence, realizing immediately the significance of his insight.

Today’s lab has three parts. First, you will complete the lab certification to show off the skills you learned at the lab orientation. Second, you will follow a four-part exercise to design a pair of PCR primers and to generate a primer record, and then third, you will use the primers you designed to set up a PCR. Next time you’ll clone the PCR product.

You’re half way done designing your primer pair! To design the second primer that you need for PCR, you’ll be repeating parts 2 and 3. However, this primer will anneal to the opposite strand of DNA and will direct synthesis of EGFP in the “reverse” direction, from the end of the gene to the start. In some ways the design of this primer is easier than the design of the forward primer. You are not making a deletion at the 3’ end of the gene so the landing sequence is easier to find. Also, you have just designed one primer so you are practiced. In another way, though, the design of the reverse primer is harder since you need the reverse complement of the sequence you have been working with. Here is some step-by-step guidance for this primer’s design but be sure to rely on your partner for help since there is no substitute for a second pair of eyes to catch mistakes.

Next day: Clean and cut DNA