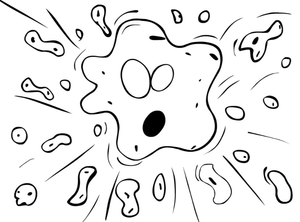 Biological systems are not static. Thus they can be engineered to account for changing environmental conditions, as we've seen through our examination of two component regulatory systems. In addition, they can be engineered to account for changes that occur as the cells replicate and divide over time. Indeed, evolution of biological systems away from an original specification can be viewed as a curse (it's not like computer scientists have to worry that their software programs change functions when they relaunch them!) or a blessing (evolution can find a solution we didn't ever dream of). Here we'll take the rosy view and try to harness genetic variability to improve the bacterial photography system. In particular we'll screen a library of changes in the Cph8 gene to find ones that increase the kinasing activity of the sensor when the cells are growing in the dark. The mutants (we'll call them K+) should make the "dark" color of the photographs more dark by increasing the amount of phosphorylated OmpR that stimulates LacZ transcription.

The region of the Cph8 protein to focus on for this purpose has been defined through traditional scientific studies of EnvZ, for example the work from Tom Silhavy's lab( PMID: 9721293 and pdf here). We've also been guided by the expertise of MIT's Mike Laub, whose lab studies the specificity and rewiring of two component regulatory systems. From these sources, a span of 5 contiguous amino acids can be identified as relevant for shifting the balance of EnvZ to greater kinasing or greater phosphatasing activity. These five residues in EnvZ are Alanine at amino acid 239 ("A239") through Histidine at amino acid 243 ("H243"), where mutations in the flanking residues (A239 and H243) have been shown to enhance the phosphatase activity of EnvZ and mutations in the internal residues (G240 V241 S242) enhance the kinase activity of EnvZ. The amino acid changes that modify the enzymatic activities are indicated on the figure below. Two important notes about these mutations though: First, the balance of kinase to phosphatase activities have been affected by the changes, but the mutations do not shift the reactions to fully "on" or fully "off." Second, the fusion protein of Cph1 to EnvZ, called Cph8, changes the numbering of the residues, as shown in the figure below. It's hoped, however, that the local environment of the region is similar to the natural EnvZ protein.

To complement the genetic approach for solving biological engineering puzzles, we'll also consider three other approaches in synthetic biology. The first is a Registry of Standard Biological Parts, essentially a community resource that has some ready-made and useful genetic elements that can be assembled into synthetic biological devices systems. The second approach is to use the Tinkercell computer model to simulate the behavior of the bacterial photography system, with the goal of performing "in silico" experiments that would take days or weeks to do at the bench. And finally, in the third approach, we'll recapitulate the genetic network of the biological system using electronic components, making explicit some of the benefits and limitations of such an approach and the often-cited analogy between building with biology and building with computer programs or electronic components.

Before you leave today, you should examine the bacterial photograph you set up last time and document your work and your ideas about the experiment.

The details for how the libraries were constructed and what kinds of changes are reasonable to expect will be considered in the next lab session. For today, you will transform a pool of DNA with degeneracies in the positions that affect the kinasing activity of EnvZ. The recipient bacterial strain is identical to the bacterial photography system except that it does not harbor a plasmid encoding the light-sensing fusion protein Cph8. It does encode the OmpR-regulated LacZ gene as well as the phycobilins from a plasmid. 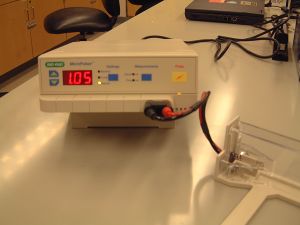 To carry out the transformation you will try your hand at a different technique for getting DNA into cells, namely electroporation. This method involves exposing a small but dense volume of cells to a pulse of current. The pulse momentarily flips the lipid bilayer, opening small spaces for the DNA to pass into the cells. As you can imagine, the cells aren't fond of such treatment and the single most important step to help them recover is to quickly add media to the cells once they've been electroporated. The process is also very sensitive to salts in the DNA, and if you pipet too much DNA on to the cells, the extra salt may cause an electrical "arc," (you'll know this has happened from the flash of light and the "pop" you'll hear) frying the cells dead. If this happens, please get another aliquot of cells from the faculty and try the electroporation again, with less DNA.

What would it take to make DNA serve as a low-level programming language so that a genome is simply a particular program?

The analogy of the DNA as computer code is not perfect. We have to set aside the presumption of an intelligent agent responsible for writing the initial program as well as accept that natural events will change the code over time (evolution leading to genetic variation--the very thing we're trying to harness in the first part of today's lab). And no good tools exist for systematically debugging the genetic code.

What would make genetic code easier to write? One idea is to make it a more “object oriented” language, defining units of known function that could be combined in standard and predictable ways. One effort to facilitate genetic programming can be found at The Registry for Standard Biological Parts. The Registry is a catalog of parts that describe basic biological functions. For example BBa_B0010 is the part number for a transcriptional terminator. The Registry of Standard Biological Parts makes its parts freely available to interested researchers and engineers, and allows registered users to add and annotate parts.

To familiarize yourself with the Registry, you'll design a protein-generating device for E. coli. This device will consist of at least 3 parts from the Registry: an ORF, a promoter and a ribosome binding site (RBS).

Try using the "catalog of parts and devices" (the leftmost icon here) to search for a part you'd like to use. Start your search in the "protein coding sequences" and then identify one of interest to you and your lab partner.

Try finding this part with the "search parts" function (under the Registry tools list on the right-hand side of the page that's here.)

To find an RBS you should restrict your search to a set of the Registry's well-characterized ones from Chris Anderson's lab or the community collection, several of which are from Ron Weiss' lab.

NOW: In plain English, what behavior do you expect for your three part construct? You should include this answer in your lab notebook and if you choose to do the optional "for next time" assignment, you can use this example as a point of departure for your discussion.

Assembly of this construct

Part of the usefulness of the Registry is that the parts conform (mostly) to a standardized assembly scheme. This scheme enables the same restriction enzymes to be used to physically piece together parts in series. The scheme does not ensure functional assemblies, however. If you have time before your cells are ready today or before the electronics exercise, then you can familiarize yourself with this "BioBrick™ assembly scheme."

Revisit the visual model for the bacterial photography system that you assembled using Tinkercell last time. Today you will run a deterministic simulation according to slides 16-23 in the linked tutorials found here and here.

In this section, we'll explore the issue of gain and signal strength in the context of an electrical circuit. As you work through this exercise, consider how the lessons learned from experimenting with an electronic circuit would map to the engineering of biological systems. 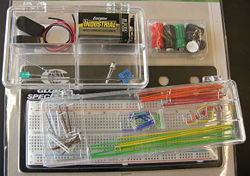 Many thanks to Tom Knight, Reshma Shetty and Barry Canton who motivated and designed an early version of this exercise. And a special shout out to Steve Wasserman for his guidance in redeveloping, troubleshooting and building this circuit to more directly reflect the experiment we're performing.

In this exercise, you'll be working with circuits connected to a battery. Practice good habits by never touching the circuit without first unplugging it.

When you connect the battery to the breadboard, make sure you do so in the correct orientation for the circuit (red to red, black to ground) or the OpAmp will break...really.

A diagram of the electrical circuit that is analogous to the bacterial photography system. Circuit designed by Steve Wasserman

This system is fairly simple one since it only consists of a few components. In contrast to the bacterial photography system in which the signal is propagated through protein activities, here signals are propagated as either voltage or current. As you can see in the schematic, the circuit contains the following parts.

The circuit has been constructed using a breadboard which is a convenient way to construct electrical circuits. The breadboard holes are connected beneath the plastic as shown in the photo. Take note of these connections because they'll affect how you will connect up components in this exercise.

Connect the OpAmp's pin 6 to pin 2 with a wire.

1. Draft your Materials and Methods section for your Mod 2 research article. You can describe the strains and plasmids you've used, the mechanics of taking a bacterial photograph, the b-gal assay and the library screen as far as through the electroporation. The due date for this assignment will vary depending on if you are presenting a Journal Club article next time as well.

2. If you are giving a journal club talk, the slides for your presentation should be uploaded to the Stellar website that is associated with our class. The presentation order will be determined by the order that your finished slides are uploaded.
3. (OPTIONAL): Comparisons of biological engineering and electrical engineering. Today's lab work may have made clear how much easier it is to assemble electrical circuits and run computer simulations of them than it is to assemble and test biological circuits. For example, it takes seconds to swap in a new resistor into your circuit or modulate an experimental parameter in the CAD tool, but it takes a few days to assemble DNA fragments (BioBricks or not). What other comparisons can you make that emphasize the

of the two types of circuits.