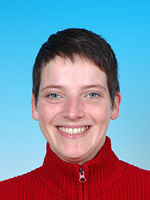 I am a PhD student in the Department of Marine Organic Biogeochemistry at the Royal Netherlands Institute for Sea Research (NIOZ).

Master of Science Microbiology. Department of Paleomicrobiology and Biology of Geological Processes. Title: “Shift of the composition of heterotrophic bacteria communities during the aggregation of a diatom bloom in the North Sea".

Tracing chemoautotrophic microbes in present and past sedimentary environments

In this project we will apply a combined approach based on the analysis of signature lipid biomarkers and functional gene analysis to study the diversity and activity of chemoautotrophic microorganisms in marine sediments. We will identify the carbon fixation pathways used by chemolithoautotrophs by quantifying the isotopic fractionation patterns of lipids and biomass in pure cultures and sediment incubations by stable carbon isotope analyses and by targeting genes of carbon fixation and re-oxidation pathways. The results from pure culture and sediment incubation studies will be used to examine the occurrence and role of chemolithoautotrophic microorganisms in ancient sediments by focusing on specific biomarker lipid molecules preserved in the geological record.