A whilese back I had a problem with my simulation where there was a break point over nothing in particular just sitting there and stopping after every while iteration. Well it's back, but now it pauses every time i try to stop the programming from running. It is not nearly as annoying but it is strange. We got rid of the last one by just copying and pasting everything into a blank .vi and resaving that. I'll probably do that, but not until i get pen-throwingly frustrated with it. 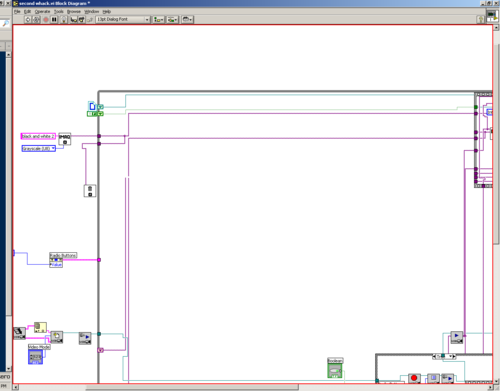 See that red line outlining the image that is the breakpoint, and there is no getting rid of it. It'll just sit there fucking with my program until i just delete the entire program. Fuck you red line. FUCK YOU

I added a sub.vi that now deletes any file that is smaller than some input number. So if anything gets saved that is too small than it is deleted. 4982785 bytes is the size of the 3 frame captures when a random fluctuation makes the program save. So now i feel like i can have this thing running without it ruining my hard drive. Of course i could add in a routine that doesn't save movies if the folder gets larger than a certain number, but I'll wait on that. It shouldn't be hard to do though. These .avis are really large. There is a compression filter that could solve this, but i don't know how to use it yet. So when some one complains to me about the size of these mutherfockers then i'll put it in. I am looking into it and it don't look too hard. IMAQ AVI Get Filter Names.vi and i think i can choose one of those compression technique and it'll compress the .avi. This computer has 11 to choose from so it shouldn't be too hard.