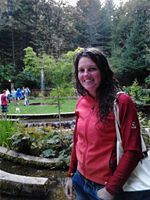 PhD student in the Department of Marine Organic Biogeochemistry at the Royal Netherlands Institute for Sea Research (NIOZ) since September 2015.

Methane-cycling microbial communities in anoxic marine and lake systems The aim of this project is to characterize the role of methane-cycling microorganisms in marine and lake systems. In this project, we will investigate the diversity of these microorganisms as well as novel metabolic/biosynthetic pathways with metagenomic approaches. We will apply biogeochemical approaches, DNA and lipid biomarkers to infer their role in past and present environments. We will apply cultivation independent techniques based on incubation studies, activity rate measurements, and ‘omic’ approaches (DNA/RNA and lipids). Field work will be also a part of this project as suspended particulate matter and sediments from marine settings (Mediterranean, Black Sea and Red Sea), and several lake systems will be analyzed.