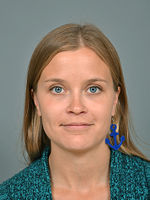 PhD student in the Department of Marine Organic Biogeochemistry at the Royal Netherlands Institute for Sea Research (NIOZ) since August 2015.

Master of Science. Major: MENVI, master’s degree in environment and natural resources. Title: The effect of N:P ratio on the competition between a toxic and non-toxic genotype of Microcystis aeruginosa PCC 7806.

Bachelor of Science in technology. Majoring in environmental biotechnology Title: Methane production from the effluent of a hydrogen plant .

Diversity and role of anaerobic microorganisms in organic matter recycling in anoxic water column and marine sediments In this project we want to investigate the diversity and role of anaerobic microorganisms in the cycling of organic matter in the marine anoxic water column and sediments. There is still a general lack of knowledge on the niches and interactions between anaerobic microorganisms in anoxic marine settings, which is essential to understand their role in the carbon, nitrogen and sulfur global cycles. For this aim, we will apply cultivation independent techniques based on incubation studies, activity rate measurements, and ‘omic’ approaches (DNA/RNA and lipids). Suspended particulate matter and sediments from the Black Sea, Mediterranean and Red Sea as well as from oceanic oxygen minimum zones will be studied.