Quick Navigation: Pages by Category | List of All Pages | Protocols

Yesterday, my collaborator asked me to fill out the order form for the products. She said it had been approved by the PI and now I await word as to whether it has been submitted. I don't have a clue when it will get here and this so far hasn't been a very good collaboration. Waiting on lines of communication is frustrating. Anyways I'll expect it by Fri so I'll get to do some things of my own in the meantime. Speaking of which...

I would like to try and tether my .97um beads so I will try something a little unorthodox. First I will tether regular (.5um) beads in a double sample with the other chamber being no DNA. I want to do this to make sure that tethering supplies are still acceptable and that tethering works like it has been. If all is successful, then I will try tethering the large beads in a double chamber. One lane will be with big beads and the other will be with little beads. The idea behind this is to compare successful tethering with hypothetically successful tethering.

{{#widget:Google Spreadsheet |key=tBC0q1P4I1rHQv_k04N47Sg |width=500 |height=300 }} I will be using the 1:50 1.1kb stretch DNA from last month. If the first set doesn't work out then I will try to tether again with a new batch of DNA. I am using the slides I precleaned yesterday. I am also going to make a fresh batch of beads diluted in BGB.

Sample 1: No DNA and DNA tethered to little beads

Tethering worked still. I had almost no stuck beads in the no DNA sample and then I had lots of stucks and tethers. I didn't look for ratio because I just wanted to make sure tethering worked. There were a good number of tethers to stucks though. One thing to note, was that the amount of stuck/tethers were really high. Lots of beads near the surface. I don't know if the DNA settled in the tube or what, but I noticed a really high concentration versus in the other channel. I'm not too worried though since this is just a visual experiment and nothing too fancy.

<html><p align="center"><<object width="425" height="344"><param name="movie" value="http://www.youtube.com/v/XJxjjAnlcDA&hl=en&fs=1"></param><param name="allowFullScreen" value="true"></param><param name="allowscriptaccess" value="always"></param><embed src="http://www.youtube.com/v/XJxjjAnlcDA&hl=en&fs=1" type="application/x-shockwave-flash" allowscriptaccess="always" allowfullscreen="true" width="425" height="344"></embed></object>></p></html>
I am really sure (as you can tell from the video) that I saw big microsphere tethers. Having clean everything definitely helped. One thing to note was that there was a little spillover between channels, as you can see in the image below. I don't think this matters since the only difference was the bead size. I'll do a better job next time though. I think it is really promising to get large bead tethers. 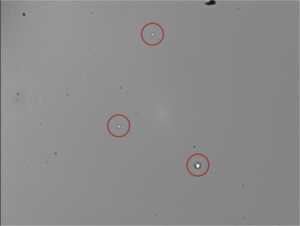 Last time I tried tethering with big beads I was unsuccessful. I wonder if this can be attributed to the kind of DNA I was using. I'm guessing no since the attachment point on unzipping DNA is about the same distance from the surface as stretching DNA's attachment point (the biotin) which is 1.1kb or ~374nm. Anyways, some good results to move forward with!

Anthony Salvagno 10:09, 17 March 2010 (EDT):No I'm looking in the big bead sample. Those are little bead spill-overs. The big bead has some little ones stuck to it or under it. That's why it looks asymmetric.

If the tethering works well, I would like to try the power spectrum analysis Koch showed me last week. I will definitely do this with little beads, but I think I should also try it with big beads and see if I can do some sort of "calibration" to see what kind of powers we are getting.