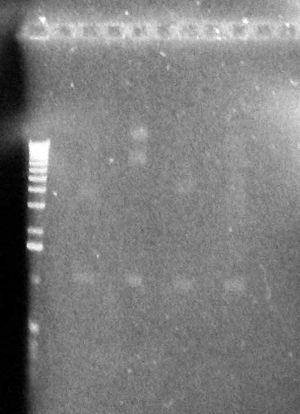 I've done it! I ran a super quick gel (on a glass plate) and loaded the gel with 2uL of ligation product (from Tues). It can clearly (by clearly I mean poorly) be seen that one of the samples has a successful ligation. For those that have no idea what that image is let me break it down:

We did not use SapD because there were several SapI sites and we wanted to get the ligation right before we did tougher ligations.

By the way, The Sap16 lane is the one that is the obvious success. There are 3 bands because the bottom band is just anchor + adapter. The next one up is just plasmid, and the top is the ligation event! Awesome. Kelly is destaining and will take another picture to see if the poor image is because of lack of DNA or because of lack of proper staining. The Saplib lane shouldn't make sense since it is a conglomeration of many random fragments.