Larry is interested in trying to expand his model of DNA unzipping by incorporating nearest neighbor interactions between base pairs. To do this, we have been discussing the Peyard Bishop Dauxois Model (PBD).

The PBD model can be described in a nutshell by the below picture. 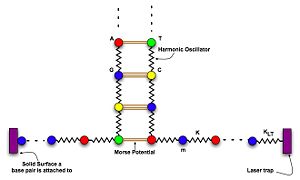 In this model, the hydrogen bonding between base pairs (the brown lines) can be described by a Morse potential.

The PBD model also tries to incorporate how the base pairs interact with each other along the DNA strand by coupling them to each other by a harmonic potential described by the squiggly lines in the picture.

This models is refreshing because before I knew anything about it, I tried to model DNA with Larry in a very similar fashion. It helps one feel better about not feeling stupid about modeling things in a simple manner.

Of course this model brings up some very simple questions that I need to look into. They include for now:

this means that the force to unzip DNA should go to zero for an infinite chain of springs with the same spring constant. Does experiment show this?

Anthony Salvagno 18:35, 11 March 2009 (EDT):Technically the ssDNA on both sides get longer. Every bond you break produces 2 more free springs. Also Larry and I were talking about this yesterday. Thermodynamically speaking, if you wait long enough bonds will melt stochastically. So at really low velocities of unzipping, you get low unzipping forces. Basically you are putting no effort into breaking bonds because the DNA is melting. This actually prolly does happen in nature, but there is so much compaction that this might not be relevant. It makes sense that there is a lot of nucleosomes because that would prevent this. As for the Morse potential, I interpreted their using that because it takes energy to get over the barrier of unzipping. One paper said (maybe Wikipedia) the morse potential is for diatomic molecules which seems like a good approximation for Watson-Crick base pairing. The constants used to describe the morse potential is where the fitting of this base pairing come into play. Papers throw around a and D as the parameters to mess with. Does any of this make sense to you? I'll be in lab tomorrow.

Andy Maloney 23:56, 11 March 2009 (EDT): What I don't understand is that if you use a simple harmonic oscillator to describe the backbone, the force it takes to break apart the DNA should go to zero. In fact it doesn't. It increases a little bit, but at some point it flattens off. This is a case for not using the SHO and using an anharmonic one. PBD talks about using an anharmonic oscillator but I'm still not satisfied with their explanation.

As for using the Morse potential, I think I can understand it by the nature of the potential. It describes how 2 molecules or atoms interact with each other at infinite separation and at zero separation. When we break a bond, this potential describes what happens pretty well. As for a and D, I don't really care because they are just parameters in a model. And, there are only 2 so I'm fine with them.

We will definitely discuss tomorrow. We should especially talk about what the nature of a nearest neighbor force is.