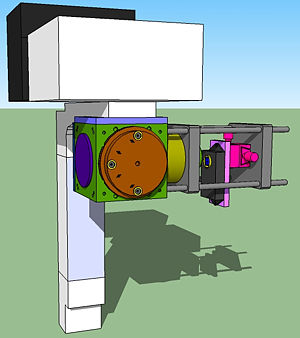 A parts list for the setup will hopefully show up below. The nice thing about this setup is that the microscope is not modified in any way shape or form. We can mount one of Thorlabs' 60 mm cubes to the illumination arm by use of an adapter plate. We have not built the adapter plate just yet, but a design for it is below. 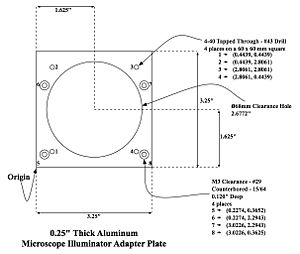 Using the cube setup allows us to mount a dichroic to steer our laser onto our QPD. The QPD is then mounted on postitioners that are mounted on a cage plate.

The above setup for our QPD seems to be right along the lines that we want it to be. Unfortunately, we are in a debate as to how to mount our condenser. As can be seen, our entire goal is to machine as little as possible and make our setup highly reproducible and easily accessible to every lab on the planet. But, we are at a loss for the condenser setup right now.

Our loss is mainly due to Olympus and their shady business practices of keeping parts and part numbers from consumers. I guess this helps them as a company because they can over charge and keep their consumers in the dark, but from my stand point, this makes them greasy and an undesirable company to use.

On the standard illumination arm IX2-ILL100 (I had to search real hard to get that number...in fact, here is a list of their part numbers for the IX71) there is a spot to hold condensers. One nice thing about this condenser holder is that it is on a rack and pinion system that allows us to move the condenser up and down easily. The disadvantages of this system is that Olympus does not make a rack and pinion system for high NA condensers and you have to deal with their lead screws to center your condenser.

The worst part about not selling high NA condensers is that they do sell a sort of fix that is astronomically expensive.

On the condenser holder is a dovetail mount that mates Olympus condensers. Olympus doesn't sell these by themselves. It would be nice to have the dovetail so that we could mount it on a lens tube system and then to a condenser of our choice, but that would be too easy. Instead, if we want to use Olympus' illumination arm with their condenser holder we will have to buy a condenser with their proprietary dovetail system and rip it apart so that we can mount it they way we want. Irritating.

Another solution is to just forget about Olympus and their dicey business practices and make our own condenser holder. To do this, we will need:

These are high orders and may proof to difficult to accomplish so we may have to just buy an Olympus condenser so that we can rip it apart.

Steve Koch 01:23, 24 February 2009 (EST):Ripping apart the Olympus condenser is fine. I also like the idea of getting John to machine it--if you think designing that wouldn't be so bad, it probably makes sense in the long run, since we'll probably need more of these dovetails in the coming years.