General ligation protocols are fine for protruding sticky end ligations but often fail with blunt ends or recessed sticky ends. For blunt ends, higher enzyme concentrations are recommended along with considerably lower total DNA concentrations (cf. Bercovich et al., BioTechniques 12(2), 190-193 (1992)). If there is someone around with a good working protocol for ligation of blunt and of protruding ends, it would be much appreciated. {MDolinar, July 25, 2007}

Hi, new to this wiki but not to wiki's. I notice that a formula was used for a 6:1 insert:vector ratio at the top of the page but later it talks about the appropraite range is 1:1 to 5:1, this seems like a contradiction. Under what conditions does one use the 6:1 ratio. This page needs at least some discussion of how to ligate vectors to inserts where both are reasonably long. Phil 18:22, 6 September 2007 (EDT).

So I have gone back to basic principles. The vector was EcoR1 digested and Cipped, heat killed the cip w/EDTA then added more magnesium and BamH1 digested, this blocks the 5' end of the linearized vector from closing or duplexing. The PCR product was cut with Bgl II (exension of 8 nt) but not EcoR1. In the latest attempt at ligation I am following a protocol 0.2 units of Enzyme 10 fM of vector, 30 fm Insert in 30 ul overnight at 14'C. This latest ligation was semi-successful. Majority of insert was in dimers and some vector-insert was barely (required trans illuminator box to see) visible, no visible vector-vector dimers.
Since lower temperature works better I will repeat, at 10'C for 24 hours and see if I can improve amount of product. It may be true that more insert forces more vector-insert product, this is the first time I have seen a ratio of 6:1 proposed. Has anyone had success using less PEG, might this improve the reactivity of vector ends?

with good efficiency, simply stated the vector and insert are not ligating. We are restructuring the vector site, removing the BamH1 site and replacing it with a Bgl II site.

Phil D The efficiency problem is in the vector, it appears.

Phil D. All inserts and vectors are cleaned up prior to RD. typically gel purification and DNA purification (Gene clean III). As I determined the insert-insert reaction works according to the book, at 10'C (which is optimal for those sticky and 24 hours resulted in near complete ligation.

It adds an extra cloning step but its worked for me where direct cutting of a PCR product and cloning failed. Alternatively, you could treat the PCR with proteinase K ... see reference below. I have not tried this approach but others in my lab have. However, based on the fact that your ligation of smaller products seems to be working and your latest ligation with BglII cut PCR product produced insert dimers, perhaps this is not the problem. (Although perhaps the EcoRI digest of the PCR product is less efficient or getting both BglII and EcoRI to cut your PCR product is less efficient?)

Phil D. Vector is purified after BamH1 digestion. Now that I have a ligation condition I know that works I am going to try it with vector only BamH1 cut, if that does not work then the MCS in the vector is the apparent problem. So . . . . If I can just get to the point of getting one closure I can re-PCR the vector-insert and cut with Eco-R1.

I am not sure that any of these ideas are very helpful to you given the controls that you've done. If I come up with any more insights, I'll let you know. 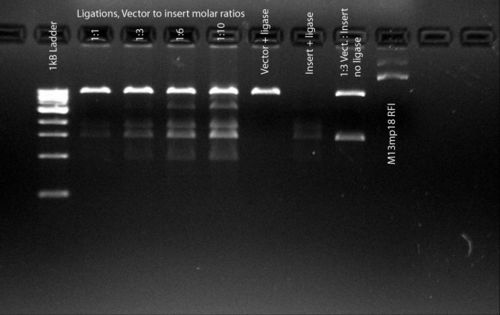