Wild-type T7 is a superb organism for discovering the primary components of a natural biological system. However, our experience indicates that the original T7 isolate is not best suited for understanding how all the parts of the phage are arganized to encode a functioning whole. We decided to engineer a surrogate genome, which we designated T7.1, that would be easier to study and extend. 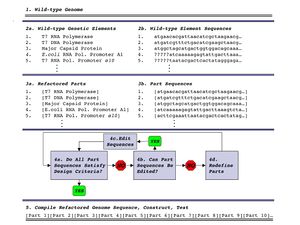