These are some design notes on the new version 5 vectors. 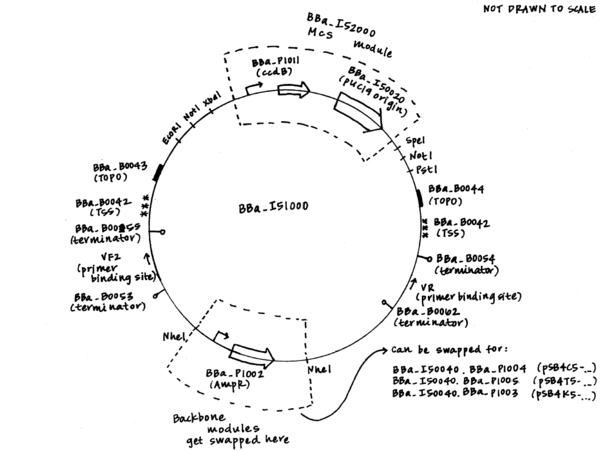 Genbank files of the sequences below are available for download. Each of these vectors is available via the Registry of Standard Biological Parts.

This is the list of DNA fragments that need to be synthesized (with the exception of the Insert which comes as part of the scaffold).

This sequence is the vector scaffold. It has BBa_P1016 (ccdB, a toxic gene ... note that original design called for BBa_P1011) and BBa_I50020 (pUC19 origin) in the multiple cloning site. It also has BBa_P1002 (ampicillin resistance cassette in the reverse orientation) flanked by two NheI sites. Digestion of this plasmid with NheI will permit any BioBrick part that has been cut with XbaI and Spe I to be inserted into the vector.

We want four different resistance markers. For these parts, in addition to getting them inserted into the vector, we'd also want them as separate pieces in BioBricks format. There is flexibility in the coding sequence of these parts. One of them, BBa_P1002 is present in the vector scaffold but we would also like it as a separate piece in BioBricks format. The other three (BBa_P1000, BBa_P1001, BBa_P1003) are modules that need to be assembled with each replication origin and then inserted at the two NheI restriction sites in the vector scaffold (to replace BBa_P1002). Note the orientation in which these modules (once combined with a replication origin) are inserted into the intact vector. Although the insertion step itself is not directional, we want clones in our preferred orientation.

We want one replication origin. In addition to getting it inserted into the vector, we also want it as separate piece in BioBricks format. It is a module that need to be assembled with each antibiotic resistance marker and then inserted at the two NheI restriction sites in the vector scaffold (to replace BBa_P1002). Note the orientation in which this module (once combined with an antibiotic resistance marker) is inserted into the intact vector. Although the insertion step itself is not directional, we want clones our preferred orientation.

Other origins can be generated in BioBricks format in the future via PCR and/or direct synthesis.

Note that BBa_P1011 and BBa_I52000 encode ccdB, a toxic gene to E. coli, and therefore will only propagate in special strains which have a mutation that confers resistance to ccdB (i.e. DB3.1). BBa_I52000 is the insert present in the vector scaffold. We will not ask for the BBa_I50020 and BBa_P1011 as separate pieces in BioBricks format but they could later be generated by PCR.

The antibiotic resistance markers and the replication origins will be supplied separately in BioBricks format.

These parts will be provided in a standard vector (like pUC19). 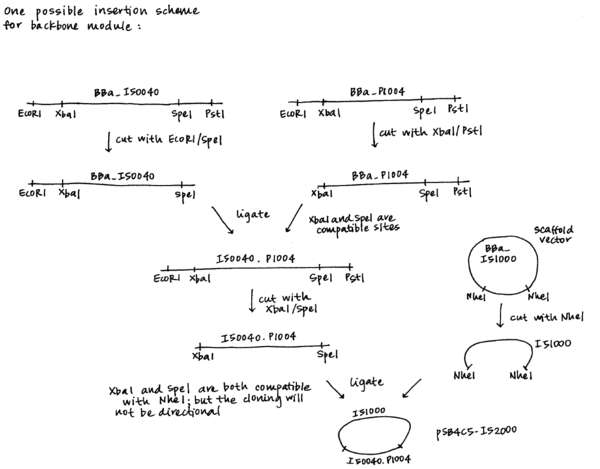 Sample assembly scheme for vectors. The same scheme can be used for all combinations of replication origins and antibiotic resistance markers. Click to view larger version.

Here are the restriction enzyme sites that I tried to remove.

Would be simplest to destroy all 6 bp palindromic sequences. This destroys a lot of the common 'normal' restriction sites.

Another idea I had was whether we want to remove all GATC (DpnI) sites from the plasmid. There are potential benefits and drawbacks to this. One potential downside is that some mutation protocols assume that you can chew up the plasmid by adding DpnI. However if our plasmid had no GATC, we could perhaps use this to our advantage in some way. For example, adding DpnI to cut up only the genomic DNA and not our plasmid (of course, this would only likely work with the base plasmids).

Unique restriction sites in the backbone

Drew wanted a unique restriction site in the backbone via which a barcode could be inserted at a later date. Austin argues that we shouldn't arbitrarily include 6bp cutters in the backbone because they could be used in parts.

Barcodes can be inserted easily into future vectors by simply assembling them with an origin and resistance marker in BioBricks format and inserting them into the NheI sites in the vector scaffold. Currently, no barcodes have been generated.

Josh initially requested unique cutters in the backbone so that in the event that the BioBrick part is the same size as the vector backbone, you could cut the backbone to enable size separation of the two.

Austin suggested using BaeI ... a so-called useless enzyme because there is some uncertainty in exactly where it cuts. BaeI already cuts in the middle of <bbpart>BBa_I50000</bbpart> but does not cut <bbpart>BBa_I50040</bbpart>.

I introduced a BaeI cut site immediately downstream of BBa_I50040. This enzyme will serve as the backbone cutter.