After lab meeting, a few of us were having a discussion on what the schema for the Registry should look like. (Some notes from that discussion are posted here). During the discussion, we started talking about the abstraction hierarchy that is on the Registry page and originally from one of Drew's slides. 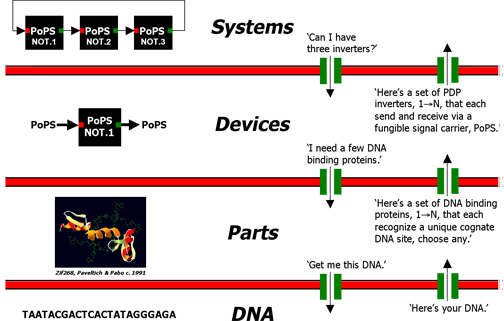 Below is the discussion on defining parts, devices and systems slightly differently from the original definitions. The new definitions are based on composability.

One appealing aspect of this composition-based distinction between parts, devices and systems is that it makes it easier to think about classes of standards that might be useful. There are assembly standards which apply to parts and performance standards (for instance, definitions of high and low signal thresholds) that apply to devices. These standards facilitate interoperability of parts with other parts and devices with other devices. Systems, on the other hand, are unlikely (?) to be subject to standards. Instead, systems are designed to meet a set of specifications. For example, I want to design a system in which cells that detect a chemical X glow green. At this point the line between parts, devices and systems might be somewhat artificial but these distinctions might serve to stimulate discussion on how to systematically engineer biological systems.

Obviously, the distinctions are somewhat vague. The idea that dawned on me during the course of the discussion with Jason and Ilya is to use the following (slightly more crisp?) distinctions

When you add the promoter, I think the repressilator is still a system but it is part of a device. I'm not sure you can add another promoter and still say that it is the repressilator since you have added a new output. You cant connect I7101 or the repressilator to another device via the PoPS framework hence they are exlusively systems.--BC 09:30, 15 Sep 2005 (EDT)

Following on from what I wrote above - A system is a collection of parts that does not have a PoPS input or output to allow composition with other parts or devices via the PoPS framework. So a device has at least one input or output that can be connected to other devices and so can form part of a larger system whereas a system is a complete and "closed" collection of parts. I don't think I'm changing the definitions too much, just wording them in a way that makes more sense to me. Worded this way I think they emphasize the composability property of the element which seems like the most clear, since interpreting the function of the elements is subjective as we all agree.--BC 09:30, 15 Sep 2005 (EDT)

Thus, the exact classification of a particular BioBrick is not fixed. In some situations, you might think of promoter as a part because you are referring to a promoter than can be regulated by a certain repressor. In another situation, you think of a promoter as a device because you need a constant PoPS source in your device/system. In other words, parts, devices and systems are not disjoint.

So if I get this right, everything that is on the one piece of DNA is always a part. However, I think that systems and devices are disjoint sets. The caveat being that you can easily convert one to the other by adding or removing a PoPS i/o. --BC 09:30, 15 Sep 2005 (EDT)

I like these definitions ... they capture the same ideas in a much more concise way. Some minor revisions.

I like the more generalized definitions of Attempt 3. However, I'm not sure if we need to define a part as having a specific function. I feel that as long as it is composable it must be a part, even if not necessarily a useful part. I don't think we lose or gain a lot by including the specific function clause other than forcing people to define a function for their part which might be a good idea. Parts also may or may not have only one specific function.

We should discuss this idea of specific function further at the device and system level. Is a non-functioning device a device? Probably. Is a system that doesn't do anything a system? Maybe. Again, I feel that a well-formed device/system (i.e one that conforms to the composition standard) can't not have a function and hence we don't necessarily need the specific function clause at these levels either.

The reason why I am inclined to include the clause that a part must have a specific function is that thus far we've tried to draw the lines between parts at places that "made sense." We could have defined a part as half a promoter with half an RBS but delineating a part in this way seems foolish because it ignores the fact that a promoter and RBS are (somewhat) separate functional units. And since it is quite reasonable for engineers to want to combine a promoter with several different RBS's or vice versa, it makes sense to keep the promoter and RBS as separate parts. The definition of a part should reflect this philosophy of modularity that we try to keep. --Reshma

One hair-splitting problem I see with the definitions we are using here is that they imply that a system (and a device) must be a part. This might not need to be true even though the current assembly standard forces any combination of parts to also be a part. We might need to replace part or composite part with just "sequence of DNA" in the device and system definition. Or we can just make a more limited definition of these that does require them to also be parts as defined here. Furthermore, systems don't need to be on the one sequence of DNA. We could say that a system must be a collection of devices.

These definitions are starting to emphasize the fact that the idea of a part is solely related to physically joining biological components (the part may or not be able to do anything by itself) whereas the idea of a device is concerned with design of function and signal processing. -BC

I agree. Devices and systems should not need to reside on a single piece of DNA. Oftentimes they can't ... for instance, a two input NAND gate. Another thing that we may want to take into account in phrasing these definitions is that not all devices will be used in information processing. In some cases, a device might consist of an enzyme that catalyzes a metabolic reaction. So the signal is perhaps catalysis events per unit time? Do we want our definitions to be sufficiently generalizable to apply to these other branches of devices? Quite possibly yes. --Reshma

Agreed on the specific function clause. With regard to the generality issue, I feel that information processing is maybe the most general description of a device. The catalysis reaction and a metabolic pathway can certainly be described as information processing even if that is not the explicit purpose. Just as a digital circuit is doing information processing even if the explicit function is to display the time. Furthermore, we draw the boundaries between devices deliberately in such a way that they are composable via a common signal carrier. For example, "catalysis events per unit time" may or may not be capable of being a common signal carrier and so may have to live within a device.-BC