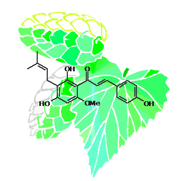 I am interested in developing sustainable and economic in planta production systems for pharmaceutically valuable natural products. Since a major focus of this work actually is on production, I am focussing on plants of broader economic importance for which extraction and processing systems are already in place. The hop plant (Humulus lupulus L.) is an interesting target because it perfectly meets this condition. Furthermore, although hops (the female flowers of the hop plant) is mainly used as an ingredient for beer, the hop plant has long been known for its medicinal uses. Interestingly, hops contain one of the most potent phytoestrogens known. Furthermore, highly active anti-cancer compounds have been identified in hops. Both compounds are produced in very low quantities in hops. Since they are not available from other plants, their limited occurrence hinders further exploitation. Therefore, the aims of my research are (a) to dissect the molecular pathways leading to production of these medicinally valuable compounds in hops, (b) to clone the corresponding genes and regulatory elements, and (c) to modify the biosynthetic routes in transgenic hop in order to increase their production in planta. I believe the successful development of transgenic hop with increased content of pharmaceutically active compounds could open up new high value markets for the hop industry.