Sequencing data for the first two clones of both sbb17 and sbb18 came in last week. I analyzed the data and found 2 non-silent point mutations in sbb17 clone 1 and a deletion in sbb17 clone 2, so I needed additional clones of sbb17 sequenced. Both clone 1 and clone 2 of sbb18 were perfect.

Today, additional sequencing data for sbb17 came in. Both clones 3 and 4 were perfect.

Today I performed analytical digests for mapping of the 4 clones of each of my 2 parts (sbb17 and sbb18).

Samples were then recorded in Clotho and transferred to the class plates.

The GSI's picked 4 colonies from each of my 2 plates and grew the cells in liquid media before class. Today I did minipreps to isolate plasmid DNA from the cells. I pelleted cells from 3 mL of culture. Also, some of the buffers used were different but equivalent buffers, as indicated below:

Today I finished the gel purification on the gels I cut on Monday. The purified EcoRI/BamHI digest products are in tubes labeled "sbb17 E/Ba gp JC 3/3" and "sbb18 E/Ba gp JC 3/3" in Box C. I then proceeded to ligation and transformation. For the rescue step, the cells were in the incubator for slightly less than an hour (about 50-55 mins) because I needed to leave for class. Plates were labeled pBjk2741-sbb17 and pBjk2741-sbb18.

Today I started with an EcoRI/BamHI Digest on each of the PCR products from my gene synthesis. After incubating, I added 1 ul of 6x loading dye to each tube and waited for someone to run the gel. Here is the gel picture; sbb17 is on the far right, sbb18 is the second from the right. 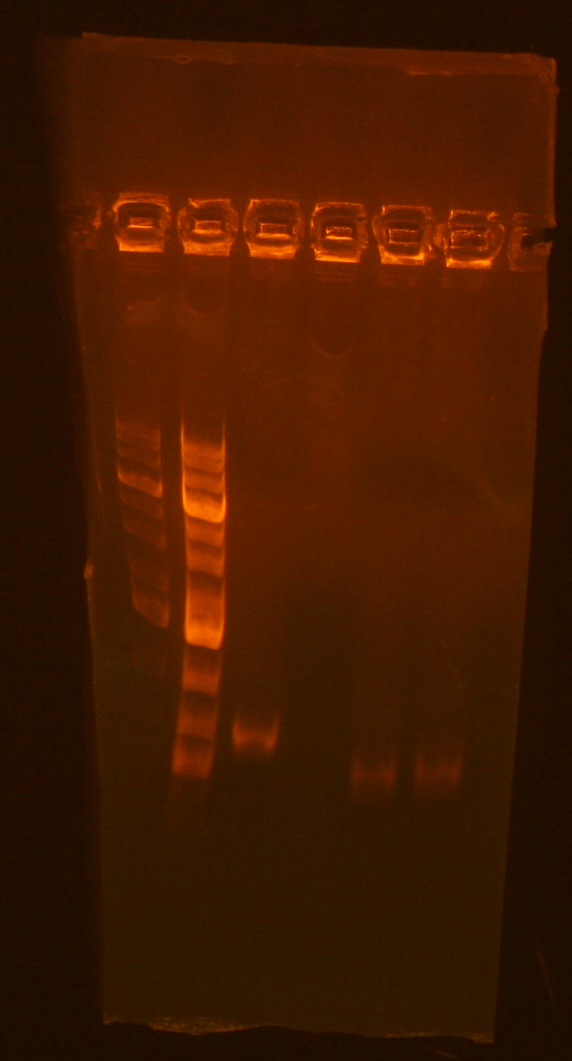 First I prepared a small sample of the PCA amplification product for an analytical gel by combining 3ul of the product with 7ul of loading dye for each of sbb17 and sbb18. I then ran a gel for these samples and a few samples from other people. The first lane of the gel picture below is the ladder, the next two are sbb17 and sbb18 respectively. I was expecting a PCA product of 424 bases for both parts. The gel looks good. 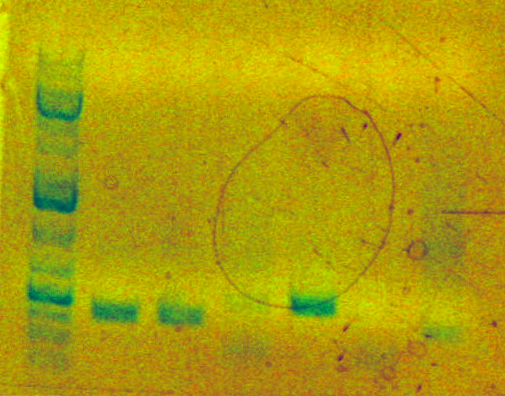 Next, I did a Zymo cleanup on the PCA amplification product for each of my parts, using A4 wash buffer in place of PE and eluting with 50ul water. The purified products are in tubes labeled "sbb17 PCR Zymo 2/24 JC" and "sbb18 PCR Zymo 2/24 JC" in Box C.

Then, I set up the amplification reaction by combining:

Today was the first day of wet lab.

I obtained the tubes containing the oligo mixes and set up the assembly portion of PCA for both of my parts (sbb17 and sbb18). I combined:

PCA tubes are labeled "sbb17 PCA" and "sbb18 PCA" respectively, and placed into the ice bucket for PCA.