The oligos were diluted to 100uM. Then a quikchange procedure was performed on the tos plasmid according to the Stratagene manual. The following sample reaction was prepared:

The sample reaction was placed in the thermocycler with the following conditions:

The tos quikchange products were then transformed into DH10B cells and plated on Amp plates.
The following protocol was used for transformation:
Transformation by Heat Shock
Note No rescue was performed for the transformation mixture because the tos plasmid has Amp resistance.

N15 part:
Purpose - Create the N15 plasmid - Prepare for a part transfer of the N15 part into an expression vector by digesting both plasmids.
Notes from last experiment: Our bacteria failed to grow. We have to change the Quikchange protocol.
Dorothy: Digest the vector with pBad and N15 plasmid with BglII and XbaI. Next time --> gel purification of these parts and we can proceed on to ligation.

Jing: Finished the digestion by running a preparative gel to extract the necessary fragments to ligate. After double checking the sequences, discovered that the restriction enzymes we used cut the vector into three fragments. (There was a different plasmid that would work, and had a very similar name to the one we used, which was why we were told to use the wrong one.)

Also the gel showed that: 1. The restriction digest wasn't very effective. There was about 50% of the parent plasmid leftover. 2. The digestion products were very close to each other. There was no way to accurately pull out the desired fragment. Thus we scrapped it, and planned to start over later. 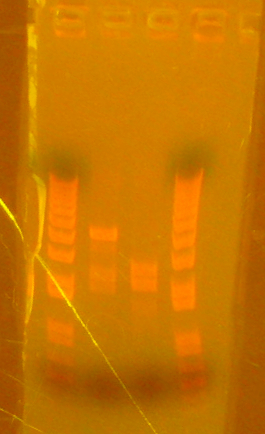 Tos part:
The oligos that were placed into the ice bucket are lost. Dorothy will come into the lab to start the PCR for quikchange on Tu 4/20 around 6PM. 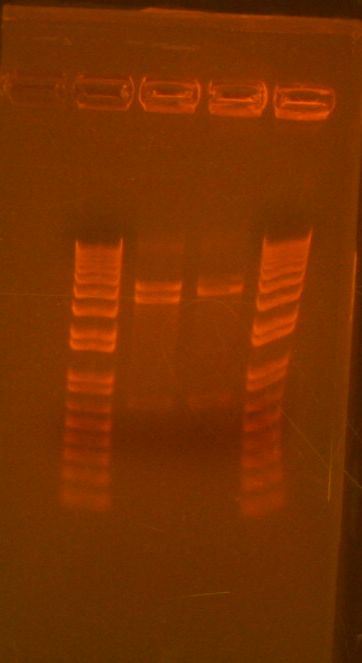 The bands corresponding for each were cut out and gel purified using the following procedure: Zymo Gel Purification

Tos part:
Purpose - Create the tos site plasmid - See if cells transformed with the plasmid with antibiotic resistance survive. If so, culture them.
Dorothy picked three tos colonies and cultured them.

Tos part:
Purpose - Create the tos site plasmid - Extract the DNA from the cells, so that it can be analyzed.
Carolyn miniprepped the three tos bacteria. Dorothy and Jing ran an analytical gel of tos. We sent the first clone to sequence for verification that the incorrect nucleotide has changed. 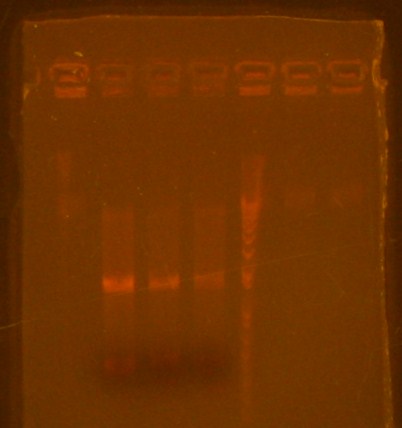 N15 part:
Purpose - Create the N15 plasmid - Put the insert and vector together, and transform into cells to copy the plasmid.
Ligated the vector and insert, then transformed the cells with N15 plasmid and plated on Kan/Spec.

Tos part:
Purpose: Try to sequence smaller colonies.
It turns out after letting the culture tubes sit longer, one of the four grew up. Will miniprepped the cells and sent it in for sequencing, but it turns out the sequencing was bad and we were unable to determine if the sequence is correct. 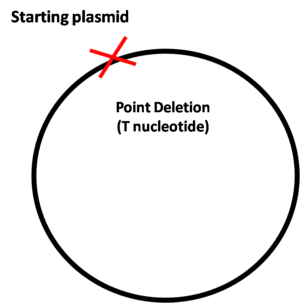 The plasmid that we received contains a point mutation. (missing "T") 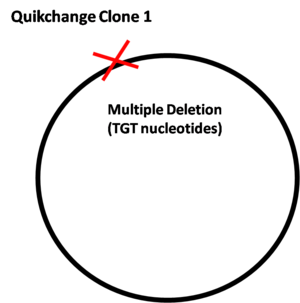 The first clone that we sequenced contains 2 more deletions, resulting in a total of 3 deletions. 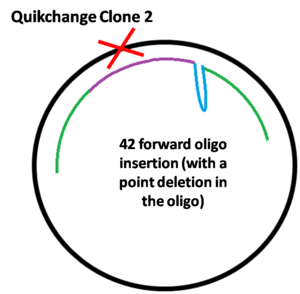 The second clone has an extra forward oligo. The sequence ended up to be 42bp longer than what it should have been. (The oligo size was 42bp.) 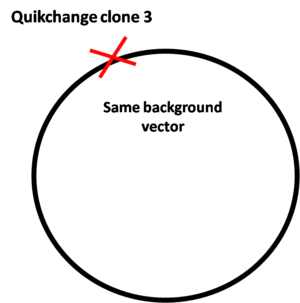 The third clone is the esact same plasmid that we started out with.


We conclude that the Tos sequence might be toxic. Another possibility that we didn't get the correct sequence is because the part might be hard to clone.

N15 plasmid result:
We did not get any colony on the Kan/Spec plate. We believe that we might have made some error during the cloning steps or the plasmid is also hard to clone similar to the tos plasmid.