In this exercise, you'll be working with circuits connected to power supplies. Practice good habits by never touching the circuit without first turning the power supply off (and verifying that it is off!). 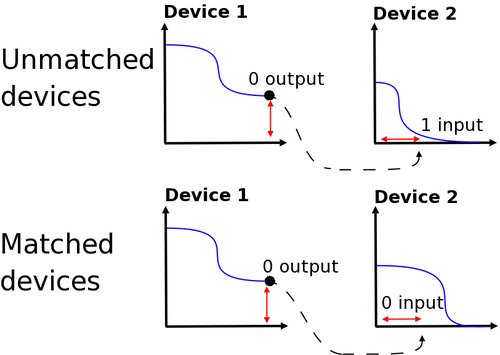 When the signals between devices are not matched, signals are erroneously propagated.

In this exercise, we'll explore one of these issues in the context of an electrical circuit. As you work through this exercise, consider how the lessons learned from experimenting with circuit would map to the engineering of biological systems. Along the way, you'll be asked questions about the circuit, answer them in your lab notebook.

The focus of Module 3 is on a bacterial photography system. This system is constructed from two devices.

We can construct an analogous system from electrical components. A photodiode is a light sensor and an LED is responds to an input by emitting colored light. Hence, it is an actuator. We can thus use these two devices to build a circuit that will operate similarly to our bacterial photography system: it will sense light and produce a corresponding color. 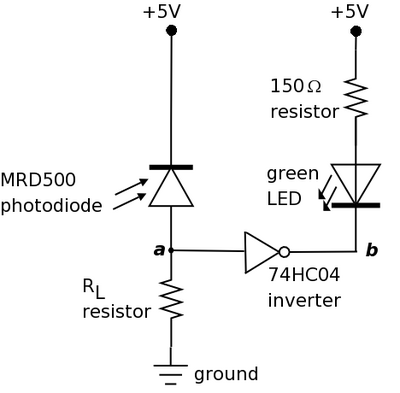 A diagram of the electrical circuit that is analogous to the bacterial photography system. Circuit designed by Tom Knight.

This system is fairly simple one since it only consists of a few components. In contrast to the bacterial photography system in which the signal is encoded in PoPS, here signals are propagated as either voltage or current. As you can see in the schematic, it contains the following parts.

For more information on these parts, consult the parts datasheets linked below.

The purpose of the photodiode is to serve as a light sensor (like Cph8 and the phycobilins) and the LED as a readout (like lacZ). The 150Ω resistor is there to ensure that the voltage drop across the LED isn't too high (which can cause the LED to breakdown). The inverter provides a convenient way of connecting the photodiode to the LED. The other resistor RL is there to ensure that the signal between the photodiode and inverter are matched. When light shines on the photodiode, its resistance is decreased and current flows through it. Thus, point a in the circuit diagram is at high voltage (near +5V) and the input signal to the inverter is high. The low output signal (point b) from the inverter creates a voltage drop across the LED causing it to turn on and emit light. In the absence of light, the photodiode has high resistance such that little current flows. Point a in the diagram is at low voltage (near 0V) and the inverter produces high output at point b. The resulting lack of voltage drop across the LED means that the LED is turned off. Much of this exercise will focus on RL and ensuring that the signal between the photodiode and inverter are matched for proper circuit operation. 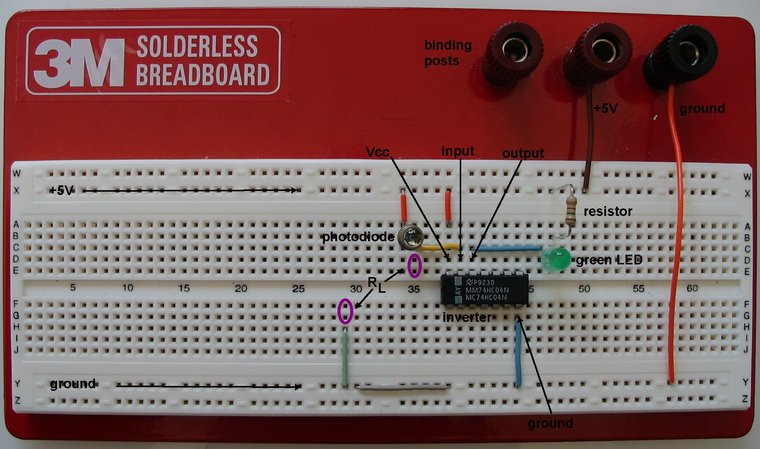 The constructed circuit with components of interest labelled.

Most of this circuit has been implemented for you. To help you understand the system, there is a picture of your wired up circuit with the different components of interest labelled. Comparison of the photo with the circuit diagram above should show that the circuit is wired up as shown in the diagram. 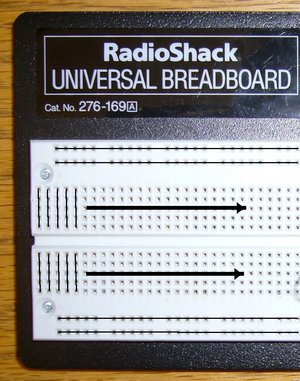 Breadboard: The lines show how the breadboard holes are connected. Typically the top and bottom two horizontal rows are used for power and ground.

The circuit has been constructed using a breadboard which is a convenient way to construct electrical circuits. The breadboard holes are connected as shown in the photo. Take note of these connections because they'll affect how you will connect up resistors in this exercise.

Examining the extremes of system behavior

Now let's familiarize ourselves with the system. To begin, you'll examine the two extreme cases for the value of the RL resistor: 0Ω and ∞Ω. Connect the binding posts on the breadboard to the power supply making sure you don't mix up the +5V and the ground. Now turn on the power supply and verify that it is set to +5V. (The display should read 5.00 and the CV light should be on indicating that the power supply is producing constant voltage.)

Notice that in fact your circuit differs slightly from the one in the photo. There is no RL resistor connecting the photodiode (point a) and ground. Thus, it is as if your circuit has infinite resistance between point a and ground (absolutely no current can flow).

Examine the other extreme case. Connect a wire between ground and the photodiode. Sample connection points are indicated in the circuit photo with purple circles. Wires tend to have very little resistance so this is almost putting a resistor of 0Ω between the two points.

This is a general technique that engineers to use to understand a system: they look at the simple, extreme cases and try to reason out the behavior of the circuit. 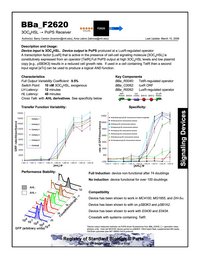 Now that you've explored the two extremes, let's try to actually build a functioning circuit. If you think back to physics, Ohm's law define the relationship between voltage, current and resistance.

We can use this formula to calculate loose bounds on RL that will yield a working circuit.

Conveniently, inverters and photodiodes have been characterized so well that their performance is very well-documented. (Contrast this to parts in the Registry of Standard Biological Parts in which very few parts have any characterization data at all. We have a long way to go!) You should be able to obtain values for VIL and VIH from the inverter datasheet linked below and values for the light and dark current from the photodiode datasheet. These datasheets have far more detail than the sample datasheet for BBa_F2620 shown.

These bounds will not be exact because the performance of real components deviates some from the model predicted by the equation. Nonetheless, this calculation should give you a place to start for finding an RL that gives a working circuit.

Now, via trial and error, try to find a resistor or series of resistors (resistors connected end to end) for RL that lead to proper circuit operation: in the light, the LED is on and in the dark, the LED is off. Make sure that one resistor end is connected to the photodiode and the other to ground (as shown by the purple circles in the circuit photo). You will need to verify that you are wiring up the resistors properly given the layout of connections on the breadboard! Use the resistor color code table linked below to check that you are using resistors of the resistance you want.

Notice how much easier it is to assemble electrical circuits as compared to biological circuits. It takes seconds to swap in a new resistor into your circuit but a few days to assemble two BioBricks together!

Sensitivity of system function to RL

Next, let's determine how sensitive system performance is to the value of RL.

You don't need to determine the exact range for RL but getting approximate, experimentally-determined limits gives you an idea of how robust the circuit is to RL. This is analogous to determining how sensitive an engineered biological system is to RBS strength or protein-DNA binding affinity. But again, it is much easier to do this experiment with an electrical circuit.

Notice that in fact this electrical circuit behaves opposite the bacterial photography system. The LED readout is on when light shines on the photodiode. In contrast, in the bacterial system, the lacZ readout only occurs for cells in the dark.

Many thanks to Tom Knight and Barry Canton for invaluable contributions to this exercise.