This is my page for Junior Lab, Fall 2007. Links to my notebook and my main OWW page, where you can find contact info, below

Steven J. Koch 23:59, 2 October 2007 (EDT):Good work during this lab, Tomas. I think you've calculated the random uncertainty correctly (based on your email comments. So, the remaining question is: why is the accepted value so far outside of your uncertainty range??? This will be a puzzle for future experimenters in the 307L lab.

This experiment worked better than I initially expected. I haven't done any proper number crunching yet, but the e/m ratio that Lorenzo and I measured seems to float around [math]\displaystyle{ 2.9\pm0.2\times 10^{11} \tfrac{\mbox{coulombs}}{\mbox{kilogram}} }[/math]

Further investigation can be done in how electrons lose energy to the helium in the bulb and how this effects radius.

01:46, 22 October 2007 (CDT)
Outstanding work, Tomas! Your work in getting the experiment working was a huge help, and the care and time you spent on data analysis are very evident. Also, I am intrigued about the weird 27 count event you saw. If you have a chance, get together with Nik and Bradley to see how their multi-day experiment turned out.

Poisson distributions model count data of an experiment that count events during a dwell time that happen at random but do so at a definite average rate. (Nuclear decay, photon detection, etc.) Lorenzo Trujillo and I set up some gamma ray detection equipment inside of a lead shielded cavity and counted the events the equipment detected in 256 10ms, 20ms, 40ms, 80ms, 100ms, 200ms, 400ms, 800ms, 1s, and 10s time intervals. The data we collected fit Poisson distributions very well, and the average count numbers fit on a line on a average count number versus dwell time very well just like anything following a Poisson distribution should. We were counting, on average, 7.39 events per second. There was an interesting instance were we counted 27 events in a 200ms period, though. I wonder what caused that. Could it be some weird particle creation and annihilation event?

I think this may be a graph of whats supposed to happen with reversed collector ring bias, bot its flipped around an only shows some nubs. No peaks. 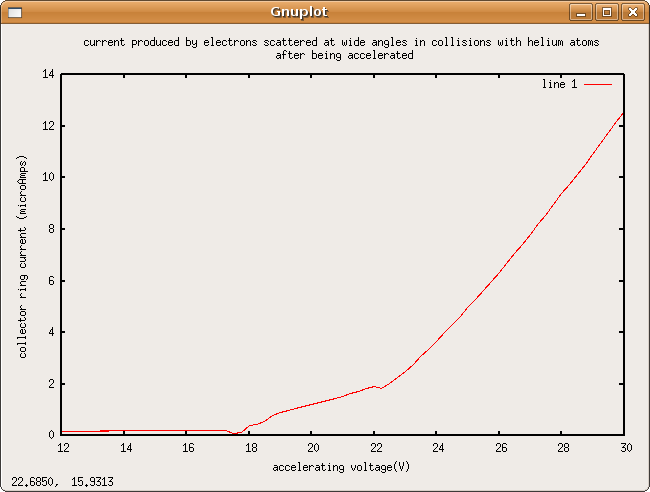 This relation was found by Johann Balmer and was later generalized by Johannes Rydberg. RH is the Rydberg constant for hydrogen, [math]\displaystyle{ \lambda }[/math] is the observed wavelength of one of the lines, and n is an integer corresponding to that particular line as well as the principal quantum number of the excited electron state that produces the line. The Balmer lines are produced by absorption or emission of electromagnetic energy due to changes in the excitation level of the hydrogen atom between the first excited state and higher energy states.