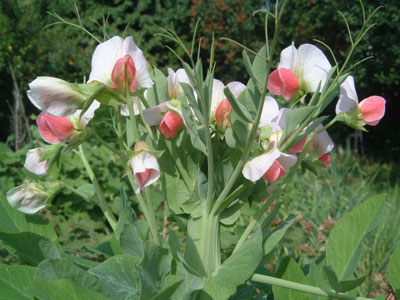 A relic of a near-obsolete type of pea known as 'crown peas', 'English crown peas', 'tufted peas', 'Mummy Peas' or simply 'Umbellata' andor 'Umbellatum'. Once common in seed lists of the 17th and 18th century, and still mentioned in gardening books in the mid 19th century, they are now all but unknown in cultivation and mostly of interest to geneticists. Their radically different stem shape meant they were classed as a separate species, Pisum umbellatum, but this was dropped when it became apparent that a small genetic factor is behind their odd appearance and they're not botanically any different from the usual Pisum sativum. This pink variety, donated to the Heritage Seed Library in recent years, is a relic of this old umbellatum type.

Like a sweet pea they have very wide and very succulent stems, and branches coming out at right angles, with clusters of flowers all in a solid bunch at the top. They do however have distinctly culinary-pea-type leaves. This strange stem-widening is known as fasciation. It's rarely found in any modern type of culinary pea, and it affects the way the plant grows and bears its flowers. Normally peas produce a flower (or two) at each leaf node. The fasciated stem is unable to do this, resulting in all the flowers being carried up to the top of the plant, where they develop pretty much all together in a big posy.

The flowers are gorgeous. Delicate, compact, immaculately formed and a very pretty two tone pink. The standard (outer) petal is a very pale pink with the lightest of pink veining, while the wing petal underneath is a stronger candy pink. I don't personally know of any other culinary pea with this flower colour. Because the flowers are borne in a clump at the top they bloom more or less all at once. This is a mixed blessing, because it looks absolutely stunning for a few days and then it's gone! 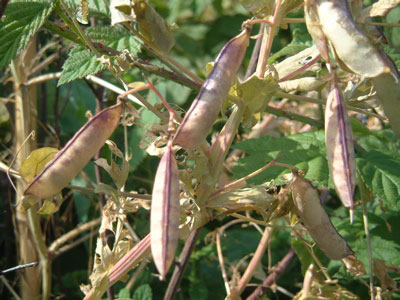 The pods start to develop very rapidly once the flowers go over and look rather strange, all sticking out in a big bunch at the top of the plant. They are not very large pods, tending to be quite short, blunt and straight, and mostly borne horizontally at right angles to the plant. They're mid-green in colour, but one of the special delights of this variety is that the pods change colour to a rosy pink as they dry out. The main part of the pod goes pinky buff while the wide seam along the front edge turns a much darker rose pink, sometimes purple. This is presumably caused by the presence of anthocyanin in the pods which is masked by chlorophyll while the pods are fresh. As they dry out and the chlorophyll breaks down, these hidden colours emerge.

You don't get very many peas in a pod ... four to six seems about normal. And they aren't terribly big either. But they are surprisingly palatable for such a novelty variety ... in fact they're very sweet and flavoursome indeed. Yields overall are quite small but quick to mature and very enjoyable raw. They were too good to cook so I haven't tried them in that form. They tasted good enough that I immediately had to stop eating them so that I could save the rest for seed. This variety's worth a regular place in the garden, even if it's a bit of a flash-in-the-pan with a limited time to enjoy its amazing blossom.

The peas themselves, when dried, have a similar colour to the dried pods. They're a sandy buff with a variable rose-pink blush. They're smaller than a modern pea and generally smooth and round.

Unlike most peas, Salmon-flowered benefits from having a bamboo stake to hold it upright as well as pea-sticks for its tendrils to cling onto. Basically because the plant is so top-heavy, with everything going on at the crown and only a thin stem at the bottom to hold it all up. The tendrils are produced mainly towards the top of the plant, so it can't climb as efficiently as a normal pea.

Recommended for anyone who appreciates something beautiful and different in their garden. 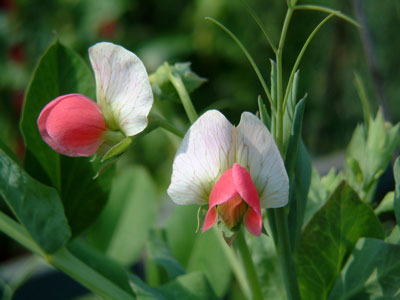