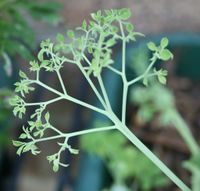 Similar to the original Parsley Pea and bred from it by Alan Kapuler. This variety not only has the two recessive genes to confer the "parsley" leaf trait, but also contains the three genes needed to confer purple pods! So named because the tendrils that have been converted into small leaflets resemble the appearance of parsley.

Plants are short, floppy and do not climb because of lack of tendrils; stems are brittle and tend to break in heavy rains. Plants can be supported by a California Weave arrangement of strings.

Parsley foliage result from recessive alleles at two different genetic loci. It combines the recessive trait for hyper-tendrils / semi-leafless with the recessive trait for all tendrils converted into leaflets. The first trait makes extra tendrils, the second trait masks the first by making all the tendrils tiny little leaves. Parsley-leaved foliage has seen some popularity as an edible green.

Individual plants typically have purple pods; bicolor and green podded individuals continue to appear in the population despite ongoing selection for the purple form. The genetic basis of this effect is most likely from some sort of environmental effect as anthocyanin expression is somewhat dependent on cooler temperatures and high UV, though other on/off switch genes which confer epistasis could be at play. It is also possible that continuing heterozygous segregation is still occurring in this variety because of the combination of three genes needed for purple pods. Regardless it is recommended to continue to save seeds from the ones which posses the best purple pods. Note that because of the stacked recessives in this line, any out-crossing would be immediately obvious in the F1 (with loss of the distinctive foliage). 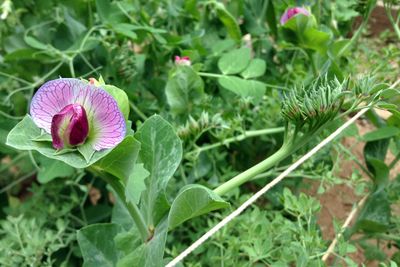