This page needs some editing to look nice 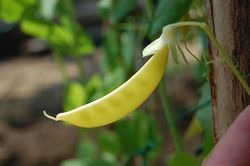 Named in honour of [Rebsie Fairholm's] friend and music collaborator Daniel Staniforth, a shining inspiration who plays cello for [her] along with a seemingly endless range of other instruments; Daniel releases his own alt-rock music under the name of Luna Trick, so this beautiful moon-like pea is for him.

The original YSS 25 protoype plant was a mangetout type - but growing its offspring revealed the presence of a hidden recessive sugarsnap gene, and a large number of the F3 plants turned out to be sugarsnaps. Beautiful, crescent-podded, golden yellow sugarsnaps! So I got exactly what I had wanted when I made the original cross - in addition to developing Luna Trick as a mangetout type.

At the moment I'm getting a mixture of single pods and double pods - some plants produced one or the other but in many cases there was a mixture of both on the same plant. I'm not quite sure how this trait works - it is clearly partly genetic but I'm not sure whether there are environmental factors involved too, or a complex interaction of genes, because it doesn't follow normal patterns and ratios. Consequently I'm just not worrying about it for the moment. Two pods per node is often deemed more desirable but I tend to find that the two pods have fewer peas in them compared to the single ones, so I'm not convinced it actually matters that much either way.

Luna Trick is stable (true-breeding) for:

Yellow pods - a very simple recessive gene is responsible for this, called gp. In order to express yellow pods, the Luna Trick prototype must have had the stable gp gp genotype. Which is fine by me. It holds only gp genes, so all its offspring will be gp gp too.

There is, however, some variability in how persistent the yellow colour is. One of the weaknesses of the parent variety Golden Sweet is that its pods tend to green up as they reach maturity, so only the young pods are truly yellow. Some of the Luna Trick F3 plants shared this tendency, but others were notable in their ability to stay yellow right up to the time they were harvested for seed. Presumably this is a genetic variable - though I don't yet know how it works - and I will select for it at the F4 stage.

Edible pods - a slightly more complicated trait, as there are two genes involved in the reduction of fibre in the pod, p and v, both recessive. They work in slightly different ways, and you need both of them to get a really good fibreless pod. I have my suspicions that Golden Sweet only has one of them, as it tends to go a bit gristly at maturity. However, Sugar Ann has them both - and now Luna Trick has them both too. There was no trace of fibre in any of the pods in the Luna Trick F3. Hurrah!

White flowers - peas need a dominant gene called A in order to "switch on" anthocyanin production. Without it, they cannot produce any purple pigment in the leaves, stems, flowers, seeds or anywhere else. Luna Trick has inherited the recessive a a genotype from Sugar Ann, and therefore cannot produce colour pigments. White flowers it is then.

Cream calyx - the flowers all have a cream calyx (sometimes with green mottling) rather than the more conventional green. This is a true-breeding trait because it's directly related to the yellow pods. It looks absolutely gorgeous with the white flowers and really gives this variety an extra beauty factor in the garden, adding to its luna blondness.

Luna Trick is still segregating for:

Height - I'm selecting for tallness, which is the work of a dominant gene called Le (internode length). The cross with Sugar Ann will have introduced the recessive type le into the mix. Although the Luna Trick prototype was tall, it had the recessive shortie gene lurking in its genome … and by a simple Mendelian ratio I ended up with dwarf types in about a quarter of the F3 plants. With a bit of luck the F4 generation should take care of this. By growing out several plants from each of several lines, I'm hoping to be able to identify the lines which produce only tall plants, and which are therefore likely to have the desired Le Le genotype.

Pod type - the prototype Luna Trick had large mangetout type pods, which represent the dominant form. However, squirrelled away in its genome was the recessive gene n, inherited from Sugar Ann, which gives sugarsnap type pods. Consequently about a quarter (or just over actually) of the F3 plants were sugarsnaps. I was overjoyed by this, as yellow sugarsnaps were the original intent when I made the cross. The way this gene works is to thicken up the pod wall, giving it its chunky and succulent 'snap' characteristic. To compensate for this thickening, sugarsnap pods tend to be slimmer. Although this genetic difference is simple and made by a single gene, it effectively creates a separate new variety.

The recessive nature of gene n means that any sugarsnap lines I follow up will be true breeding for sugarsnap pods, as they will be genotype n n. The mangetout Luna Trick, on the other hand, will continue to throw up the odd sugarsnap from recessive genes hidden away, and I'll have to eradicate those through repeated selection.

Even within the mangetout type, differences in pod size and shape are apparent. The ideal I'm looking for is a fairly wide crescent shaped pod, but some are narrower and some are extra wide, and some are not quite so crescent-shaped.

Flavour - this is the most important factor, and I would have liked it if all the offspring had tasted as good as the prototype - but only some of them did. I know very little about the genes involved in pea flavour. The combinations are very varied, and so I assume a number of genes have a bearing on it. Sugar content obviously is a major factor, but it's not the be-all and end-all. Some peas taste very sweet but are still quite bland, others have a rich and interesting flavour but aren't particularly sweet. There is also a kind of 'soapy' taste which peas are prone to which seems quite independent of the other flavour variables. The flavour variability in the Luna Trick F3 was quite considerable. They ranged from something akin to nectar of the gods to something bordering on bitterness. Some were just bland. Overall though, the vast majority tasted substantially better than Golden Sweet - and the best ones were truly exceptional. So I'm confident of creating a flavour benchmark with Luna Trick - it's just going to take a bit of careful selection.

Seed colour - the Luna Trick prototype was heterozygous for seed colour, producing both the dominant cream seeds and the recessive green ones. Some of the resulting F3 plants were homozygous for green seeds, but the lines I'm most interesting in following up happen to be heterozygous ones, so the variability will continue in this coming generation. I'm not too bothered about this. I might select one colour or the other if it becomes easy to do so, but I don't see any harm in having the variability. It would be unacceptable in a commercial variety to have mixed cream and green seed, but I don't see why not. One of the compensations of public domain plant breeding is that you're not bound by rules and conventions.

Sugarsnap version of Luna Trick. I will develop this type separately and make a new variety with a different name.

I'm working on the mangetout and sugarsnap versions as completely separate varieties, and at some point the sugarsnap one will get its own name. 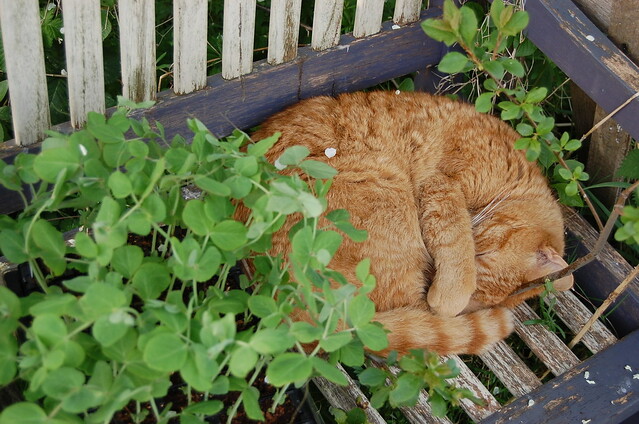 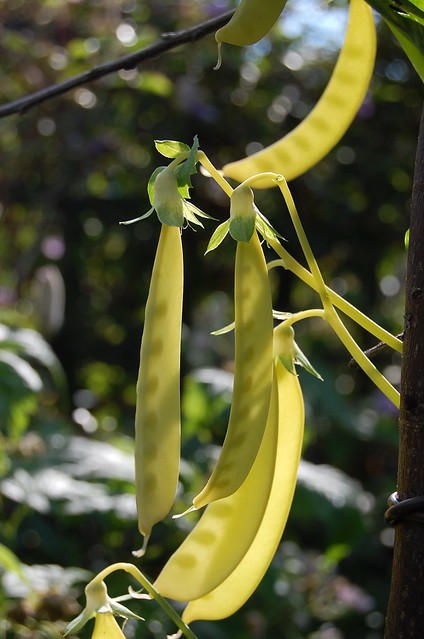 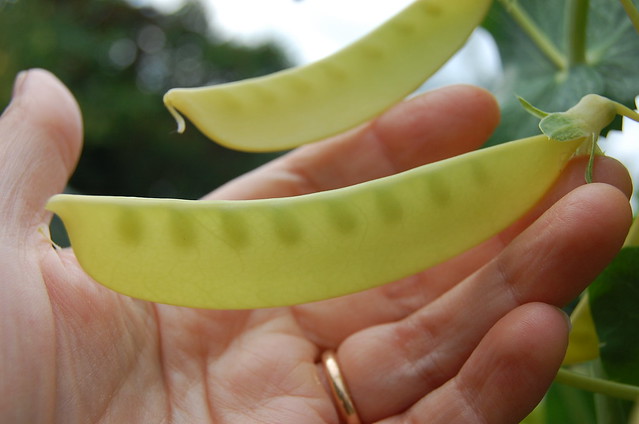 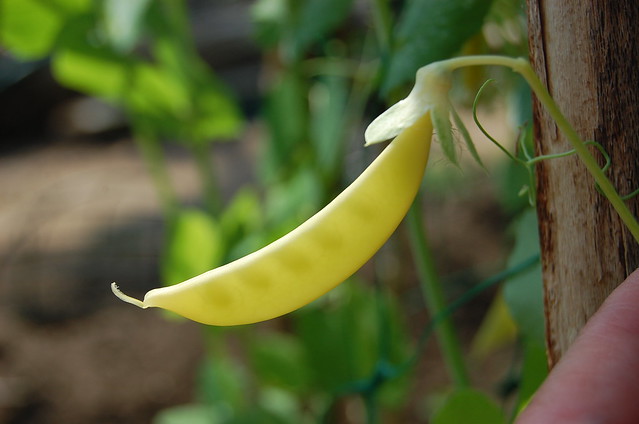 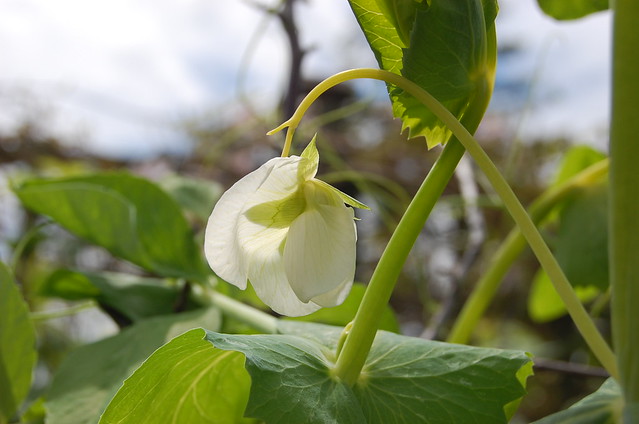 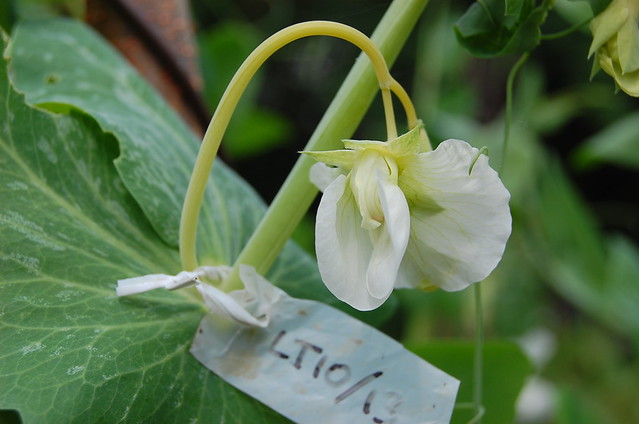 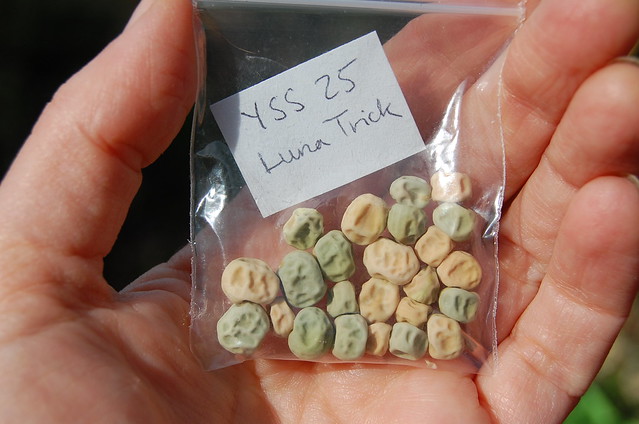 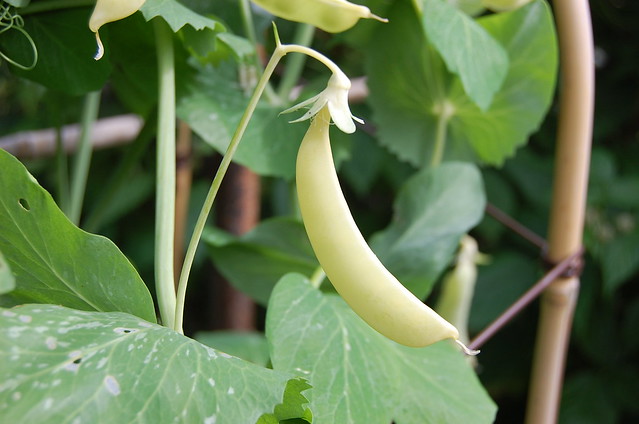 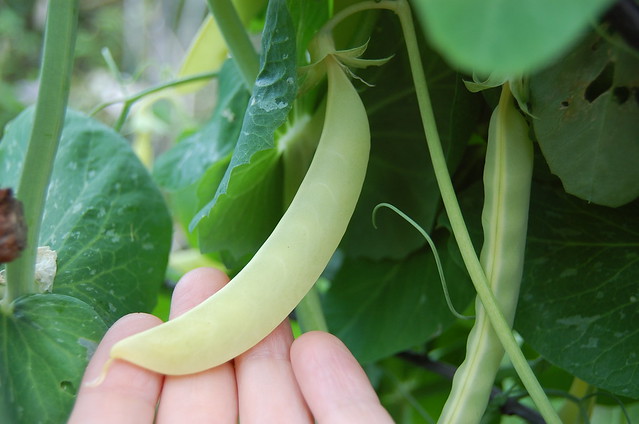