This page will be regularly edited to update OSM's understanding of ion channel interactions with regard to both series four compounds and antimalarials under investigation in other research groups.

The structure of this page is deliberately inverted so that people can identify our current needs, so please scroll down for further details!

Anyone can edit this page (so please do so if you want to add/edit anything). Additionally, open electronic lab notebooks on pharmacophore modelling, synthesis of series four compounds and many others await your contribution. Discussion is also held on GitHub and you can tweet to OSM or visit the facebook page

* To screen more series four compounds in Kiaran Kirk's ion regulation assay - To date we have seven compounds have been assessed. OSM next needs to determine 'the frontrunner compounds' - molecules that show greatest promise as antimalarial candidates - and to send ~10 of these to be screened at ANU against PfATP4 and concurrently reexamined in whole cell potency experiments at Syngene. Additionally, a couple more inactive and weakly active compounds will be also be sent for evaluation in the ion regulation assay. Action Required: Resynthesis of ~1 g quantities of each compound so that plentiful stocks are available for all assays.

* Develop a pharmacophore model to enable in silico prediction of PfATP4 inhibition - The Kirk lab published a paper detailing a set of 28 malaria box compounds (of diverse chemotypes) that were active in their ion regulation assay. More data will be available soon (link coming). OSM plan to launch a competition which would use existing data from the Kirk lab to find the best predictive model for PfATP4 activity (details on GitHub). More data will be made available *soon* and will be placed in the public domain so that it can be to build the model. Competition entries will be evaluated using a 'test set' of active molecules (not currently in the public domain) that have also evaluated by the Kirk lab.

Existing Ion Regulation Data on Series Four Compounds Some Series Four compounds were found to inhibit the PfATP4 ion channel in an assay performed by Kiaran Kirk's lab at Australian National University. Of the seven compounds tested, three that were active in whole cell asssays (MMV670944, MMV670767 and MMV671677) were also active in the ion regulation assay. Compounds that were inactive in whole cell assays were also inactive in the ion regulation assay. 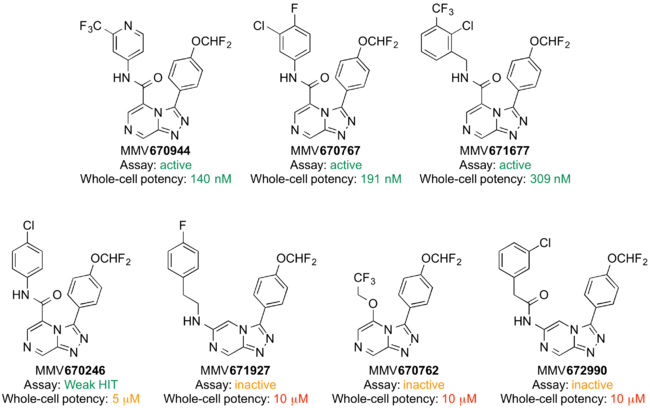 Compounds Sent to Kirk and Fidock

Status of Current Pharmacophore Model Murray Robertson used the 28 malaria box compounds, known to cause disruption against Na+ regulation in PfATP4, to search for common pharmacophore features. Murray's initial attempt was unsuccessful (i.e. not predictive - see above, where the "P Model predictions" correlate poorly with what was found in the ion regulation assay) possibly because the model did not allow for overlapping binding sites or take into consideration compound chirality.

A Brief History of ATP4 and Malaria

The Spiroindolones and KAE690 - 'Novartis Compounds'


Millions of compounds have been explored as a potential antimalarials as part of a concerted global effort to find new medicines to combat emerging resistance to existing drugs. Whole cell assays are an essential high throughput screening method for the identification of active compounds. In 2010, whole cell screening revealed a potent class of compounds, the spiroindolones, which were able to inhibit the growth of blood stage malaria parasites in vitro. [1]

Following a barrage of other in vitro assays, one of the spirondolones, KAE690, was progressed to Phase II human clinical trials, where it was shown to be effective against uncomplicated Plasmodium falciparum and P. vivax. Additionally, the drug was active in late stage gametocyte assays. The ability to inhibit gametocytes is highly prized in antimalarial candidates as gametocytes are the sexual form of the parasite transmitted back to the mosquito. Therefore, drugs that terminate gametocytes play an important role in breaking the cycle of transmission.

KAE690 was next explored in drug pressure experiments. Microbial pathogens, such as plasmodium, are well known to develop resistance to drugs under prolonged exposure to medicines, both in laboratory experiments and in affected populations. Lab experiments can simulate the resistance developed in patients and also provide insight into the mechansims of resistance, which in turn can help to identify the mechanism of action of the therapeutic. Increasing concentrations of KAE609 were applied to particular parasite strain over the course of a few months. The amount of drug required to inhibit parasetemia by 50% (IC50), was found to increase, indicating that the parasite had developed some resistance to the drug. Genetic analysis showed that the 'resistant' parasite had several mutations in a gene located within it's plasma membrane, PfATP4.

P. falciparum P-type cation-transporter ATPase 4, or PfATP4 is an integral parasite plasma membrane protein that was originally thought to be a Ca2+ pump. Current evidence suggests that PfATP4 is involved in [Na+] regulation Currently, the structure of PfATP4 is unknown and Kirk's assays (measuring parasite [Na+]) are indirect measurements of postulated inhibition of PfATP4. Joseph DeRisi built a model of PfATP4 with KAE960 'docked in the presumptive sodium channel'. This is an example of a homology model, as it has been built using known structures of similar ion channels. 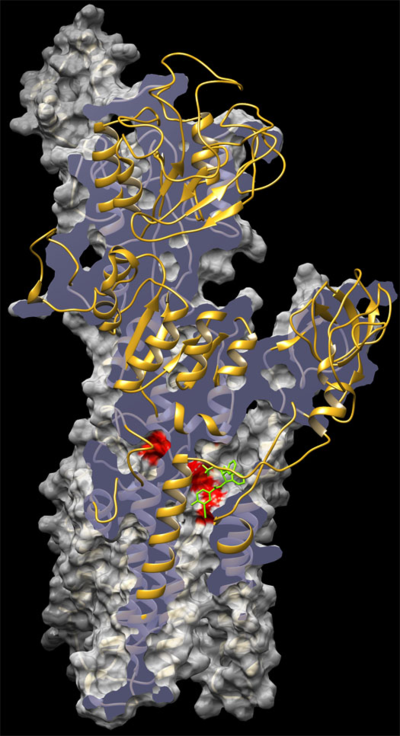 Homology model of PfATP4 with docked compound by J. DeRisi and J.Horst

Na+ regulation in the malaria parasite
Plasmodium falciparum is an intraerythrocytic (situated or occurring within the red blood cells) malaria parasite. On entering a red blood cell the environment experienced by the parasite changes from high Na+ concentration and low K+ concentration (blood plasma) to the low [Na+] and high [K+] media of the cytosol. Around 12 hours after invasion, the parasite establishes itself in the host and develops 'new permeability pathways' for the influx of Na+ and efflux of K+, which in turn provide the energy required transport nutrients across it's membrane. The new permeability routes lead to a change in erythroyte cytosol environment so that the ratio of Na+/K+ is again reversed to mirror that of blood plasma. Despite the change surrounding the parasite, it manages to maintain a low cytosolic [Na+] concentration. The mechanism of Na+ homeostasis within the plasmodium falciparum parasite has been investigated by Prof. Kiaran Kirk's group at Australian National University. Investigations by the Kirk lab have shown that the cation ATPase PfATP4 is responsible for maintaining low Na+ concentration in healthy parasites.

In experiments where parasites were removed from their host cells and treated with KAE809, the concentration of Na+ increased instantly, adding further evidence to the hypothesis that this class of molecule act at the PfATP4 ion channel.

Kirk Lab vs The Malaria Box
The Kirk lab have examined antimalarial compounds (known actives in whole cell assays) and looked at the way in which they perturb Na+ regulation within the parasite. OSM needs to profile the activity of more S4 compounds in the Kirk lab in order to gain better understanding of this possible MoA.

PfATP4 is the apparent target of a number of different chemotypes: Kirk Review

Five of the distinct chemotypes that are active against pATP4

The following actives (MMV670246 is poorly active but included for comparison) have been identified as the "frontrunners" for further exploration by OSM. All but one of these compounds were found to be active in a whole cell assay, but to date (June 2016), only one has been tested in Kiaran Kirk's ion regulation assay. 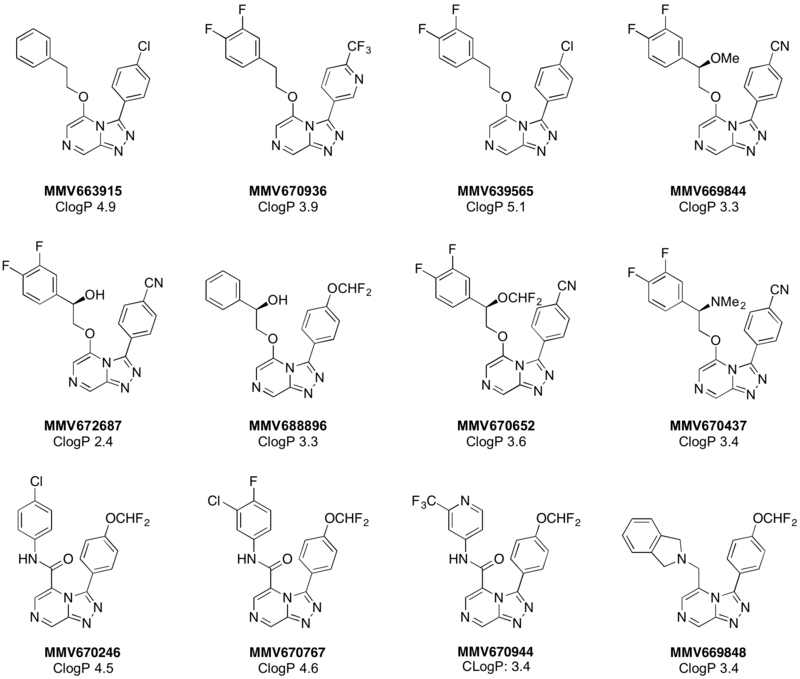 A large range of data has been measured for the compounds and this is captured below in a condensed form of the master chemical list, which is colour coded to assist when glancing over the data (key: green = good, yellow = OK and red = poor).

Condensed and colour coded data for the frontrunner compounds

In order to further probe the MoA of the series four compounds it is necessary to send these compounds for testing by the Kirk group at ANU. For example, three of the compounds have been tested in vivo and are able to kill the parasite in mice, but the MoA is still to be tested. We would also like to fill in the gaps in the data where possible as this will help when rationalising compound design and also for assembly of the S4 paper.

The active compounds are mainly ethers along with a few amides and one amine:

Amides MMV670246 was found to be a weakly hit in the ion regulation assay and to possess low activity in the whole cell assay. Hence, further data should be collected. MMV670767 is an amide with good whole cell activity but we should collect more data. MMV670944 is an active amide with lots of data - ion regulation data is required in order to produce a complete profile for the paper.

Amine MMV669848 active in the Kirk assay and has shown other promising properties, more exploration required.

Resynthesis is required in order to provide adequate quantities of the compounds for testing.

New Compounds We have shipped 12 compounds for potency evaluation and are awaiting data before folding the compounds into this issue. However, one existing compound MMV670947 has shown good activity and either this or the newly synthesised MMV693155 should be sent for testing.

We also need to look at some inactive/weakly active compounds and examine them in the Kirk assay and collect other data (hERG, Cytotox, clearance etc.). Some suggestions are:

Pyridine ethers MMV688895 - this compound should be re-tested in whole cell to confirm a lower potency than MMV670936 and also tested in the Kirk assay. pyridine ethers

Amides MMV675947 and MMV675946 are moderately active amides that would serve as good controls in Kirk assay. MMV675718 is an inactive amide that should be included as a negative control in Kirk assay.