This series of compounds was briefly examined by the Open Source Malaria consortium but halted because news was received that another (closed) group were looking at the same series. It is dormant in the open project. A UK group published on this series in 2015.

The triazolourea singleton has the following structure:

The proposed synthesis for this compound is below: 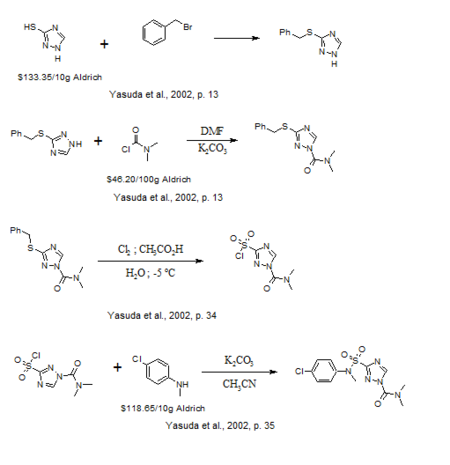 The chlorination step in the above synthesis is a bit of a worry:

Elemental chlorine is used to debenzylate, oxidise and chlorinate the sulfur atom in one step over 55 minutes with 80% yield. Given that a 6 kg cylinder of chlorine from Aldrich costs $2782.50, other methods of chlorine production, or an alternative reagent which can be substituted for diatomic chlorine, are preferable.

In the event that chlorine is used, an apparatus will be needed to produce it and bubble it through the benzylated triazolourea starting material: 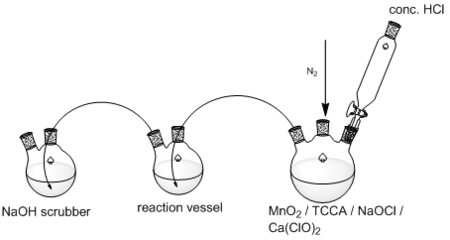 The advantage here as opposed to purchasing a cylinder is that no substantial amounts of excess chlorine need be produced (or bought). Once 55 minutes have lapsed the acid dropper can be closed. The disadvantage (aside from using chlorine) is that I assume it would be hard to monitor the reaction by TLC. We don’t want any excess chlorine getting out.

(Any input on Cl2 production gratefully received directly below (if you're a member of OWW) or at this G+ post or on Twitter at @osddmalaria.

There are five methods of chlorine production available that I’m aware of. Guidance here has been provided by len1 at Sciencemadness

1. C3N3O3Cl3 + 3HCl => 3Cl2 + C3N3O3H3 Sciencemadness reports that this method produces relatively dry chlorine with little no gas. No heat is liberated in the reaction. TCCA doesn’t need to be stirred but in the event that it does, it dissolves slowly in water. TCCA is available from Aldrich for $46/50g. 50 x 200g tablets of hy-clor are available from Big W for $78.

2. NaOCl + 2HCl => Cl2 + H2O + NaCl Ca(ClO)2 + 4HCl => CaCl2 + 2H2O + 2Cl2 Bleach dissolves in water (and water is produced), so stirring would be easy. The by-products are fine in both cases. There is less chlorine production in both compared to the TCCA reaction above. Sciencemadness reports that the acid, water and chlorine combination dissolves the plastic tubing used in the reaction setup.

There is also a video (with theme music from one of my favourite video games, no less), on YouTube detailing these methods of chlorine production.

If avoiding chlorine at all costs is preferable, then the following routes can be considered:

1. Hydrogenolysis of the benzyl protecting group, followed by use of cooled NaOCl (or Ca(ClO)2?) and HCl to create the sulfonyl chloride that we’re after. This comes from Wright and Hallstrom (DOI: 10.1021/jo052164+ (J. Org. Chem., 2006, 71 (3), pp 1080–1084)). These authors warn that if chlorine is used, then the product we’re after might be produced in only 10% yield, or thereabouts (though the literature synthesis comes in at 80% yield). Temperature control at -5°C to -10°C using NaOCl affords a nearly quantitative yield in their synthesis of a pyrimidine-sulfonyl chloride.

2. Using NCS might be possible.100g NCS costs $42 from Aldrich. I’m not sure what the mechanism for this one is, or if it’s able to cleave the benzyl protecting group. If not, that’s not an issue because we can do the hydrogenolysis first. Mat and Paul suggested this method. There’s a literature procedure available but I can’t get to it. https://www.thieme-connect.de/DOI/DOI?10.1055/s-2006-950353

3. There’s a paper on SciFinder which I can’t get access to which de-benzylates and oxidises/chlorinates the sulfur atom in one step without chlorine gas. Instead, they use iodosobenzene (263.55 per 100g Aldrich) and HCl treated silica gel to achieve the synthesis. See here: http://www.jstage.jst.go.jp/article/cl/21/5/21_891/_article

Let’s have a vote. I’m of the opinion that trying it with chlorine gas. Though dangerous, it would also be a lot of fun.

Contact information for the open source malaria project can be found on the landing page.

Iain Wallace posted a Cytoscape file which details purchaseable compounds related to the two series. (activate the chemviz plugin within Cytoscape to view properly). The results of this work, in the form of a list of purchaseable compounds, can be found here. A list, in .csv format, of these molecules can be found here. Listed are the identifiers of the above molecules in InChi, InChiKey, SMILES and eMolecules formats.

The compounds of concern, which we're after, can be seen here: 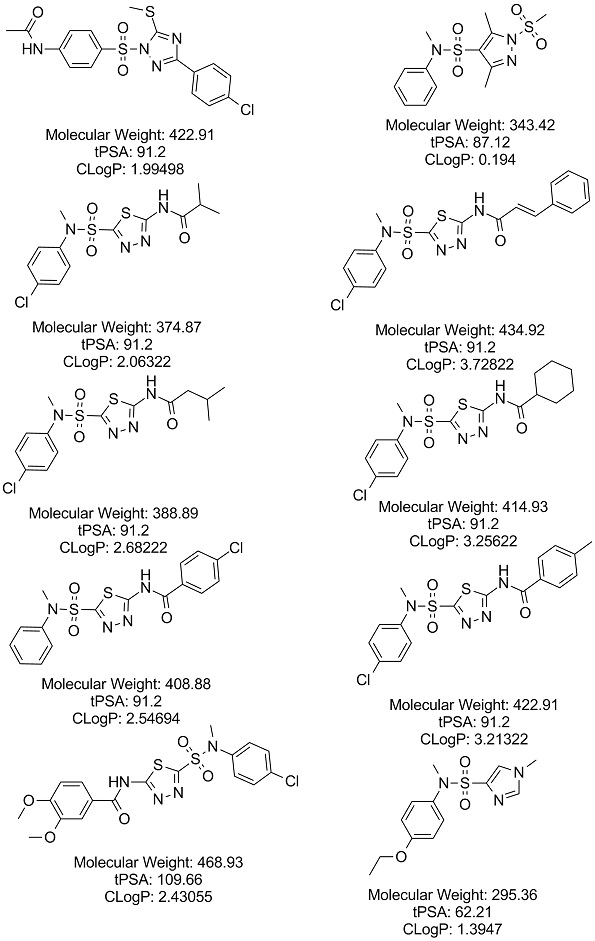 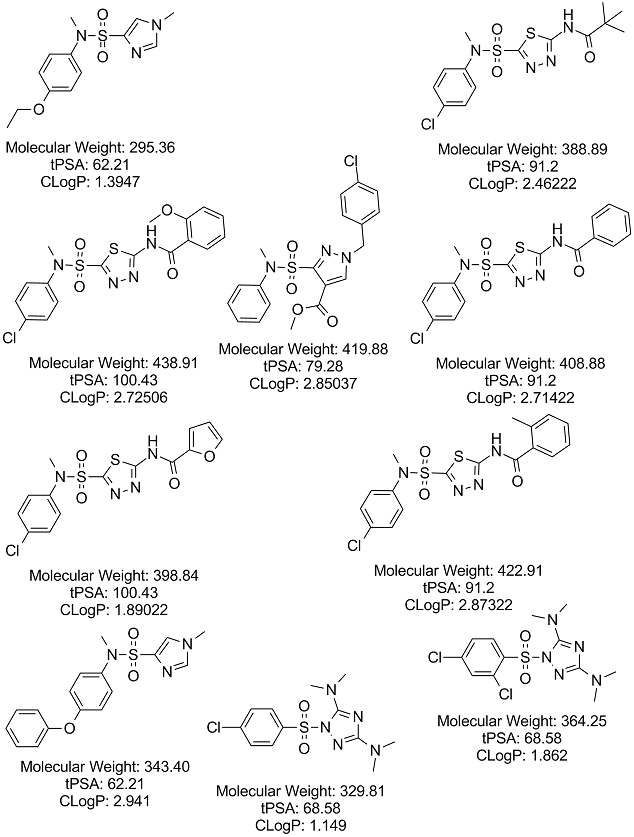 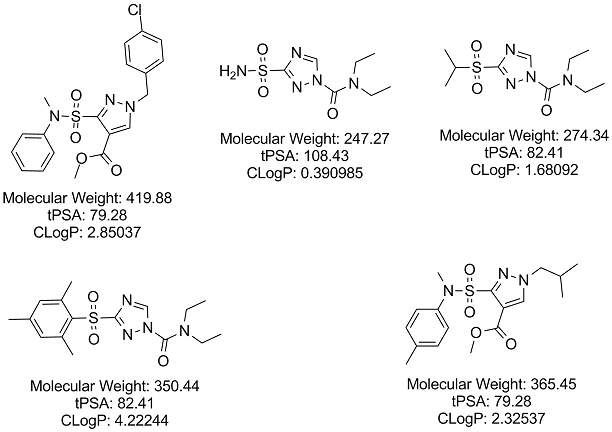