This page is no longer being updated, and is in the process of being migrated to the relevant Github repo.

The most recent experimental updates were compounds made in Jan 2015 and evaluated in May 2015. Planning sessions took place in Sept 2013.

MMV has developed a set of compound progression criteria and these should be used to inform the project.

Guiding Objective for This Series

1) Maintain low calculated logP values (ideally <3.5) for proposed compounds
2) Be mindful of molecular weight (try to keep <500)
3) Aim for structural diversity, given the original hit (OSM-S-106) arose from a phenotypic screen and has no known target/mechanism of action
4) There must be a reason for doing synthetic chemistry: Can analogs be obtained by other means, from other groups? Is the original hit actually the best compound?

See May and September 2013 consultations for which ATP analogues should be targeted.

Latest round of biological evaluation here. Compound structures governed by what was accessible synthetically in the short term, in particular by what boronic acids could be made/bought.

Results: All changes had seriously deleterious effect on activity. Meta sulfonamide appears necessary for activity. Morpholine is a poor replacement for amine. Results for OSM-S-137 vs TCMDC 132385 (structures here suggest that variation of amine is possible where there is some variation (i.e. removal) in the sulfonamide portion. Raises possibility that there might be two targets - one hit by the substituted pyrimidine and one by the aryl sulfonamide.

Rationale for structures: Morpholine substitution was thought to have been sensible based on this modelling analysis. Longer side chain attached to amine in OSM-S-137 was proposed because of mild activity for TCMDC 132385 (again, comparison here).

Solubility: In several cases there appeared to be some sort of solubility issues, though we had expected all these compounds to be highly soluble.

Short term TO DO items:

1. Morpholine group appears to be a bad substitution. Make other substitutions on the primary amine, such as one or two methyls (dimethyl InChIKey CGTVWFYTOADSRO-UHFFFAOYSA-N). Route to that would likely be to take OSM-S-70, add dimethylamine, then brominate, then Suzuki. Action item for Althea.
2. How many more meta-substituted sulfonamides like OSM-S-106 exist in the literature? We've done this search before (link?), but let's revisit. Action item for Alice.
Answer: There are 59 commercially available meta-substituted boronic acid/esters from Boron Molecular as shown here.
3. We already ordered several other meta-substituted boronic acids, 10, 15 and 55 - ([1]), some of which have now come in (10 (OSM-S-135) and 15 (OSM-S-133) already synthesised and tested [2]). We need to evaluate these. Action item on Althea.
4. Are there any doubly-substituted meta-boronic acids we could employ in the coupling? Action item on Alice.
Answer: There are a few doubly-substituted meta-boronic acids/esters available from Sigma Aldrich as shown here.
5. TCMDC-132385 should be synthesised to check its activity, as well as the fragments without the fluoroaromatic, and with other aryls. Action item on Murray.
6. Ask GSK for any information they might have on known inactives around OSM-S-106 where there is variation in that pendant amine side chain. Action item on Mat.
7. Make OSM-S-106 with substitution of the amine with a methyl ether (InChIKey RMRWXSBDYMDPPE-UHFFFAOYSA-N). Devise synthetic approach. Action item on Alice.

1. Synthesise des-amino OSM-S-106 (NAPAWLMTRGMNSY-UHFFFAOYSA-N), i.e. substitute the amine for H on the pyrimidine. Who wants to do this?
2. Can OSM-S-106 be derivatised further, i.e. this compound as a starting point?
3. Can Murray's new bromo-regioisomer synthesis be used to make more diverse compounds. How risky is this in terms of the amount of methodology needed?
4. How easily can scaffold analogs of OSM-S-106 be accessed, e.g. furan (GSJDJXHDXORRDD-UHFFFAOYSA-N), flipped thiophene (NBFDNDWQCGJNHN-UHFFFAOYSA-N), pyrrole (XTMBLMGMAYOFBP-UHFFFAOYSA-N), indole (ZVHBDXVFFFLUQY-UHFFFAOYSA-N), pyridine vs pyrimidine (FCEYCXXGTFVWIS-UHFFFAOYSA-N)?
5. Order a selection of meta-substituted boronic acids/esters (based on May 2013 consultation ) to make some more thienopyrimidine analogues.
6. Synthesise some analogues containing sulfonamide bioisosteres such as sulfonimidamides. Inspired by this publication: DOI: 10.1002/cmdc.201200014.

Compounds from Edinburgh: Tom Foley and Jamie Scott, May 2015.

A proposed synthesis for this hit compound was drawn up, and is shown below: 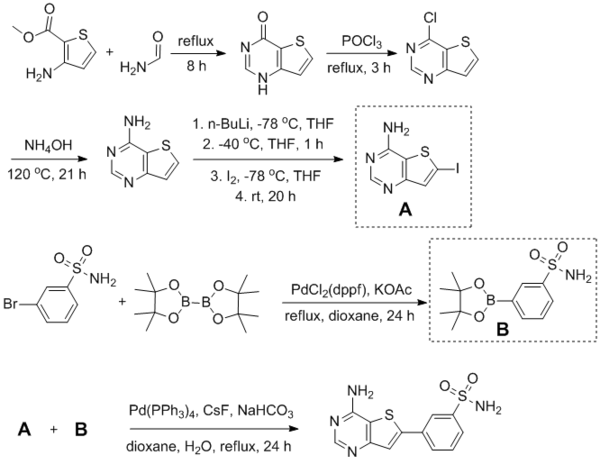 It was envisioned that the hit compound could be generated using this convergent strategy. The thienopyrimidine scaffold was to be synthesised from the commercially available formamide and methyl 3-aminothiophene-2-carboxylate. The use of trivial heterocyclic chemistry was thought to be sufficient for the introduction of an amine at the 4-position of this scaffold, before the substitution at the 6-position by a halogen was to proceed using lithiation/halogenation. Meanwhile, the benzenesulfonamide moiety was to be generated by transforming the commercially available 3-bromobenzenesulfonamide into the relevant boronate ester. The thienopyrimidine scaffold (A) and benzenesulfonamide boronate ester (B) would then be united using a Suzuki coupling.

The synthesis of the "Twisted" analogs containing ortho-methyl groups, with the intention of improving solubility, is discussed in Github posts 58, 118 and 161.

A pyridyl analog was proposed by Matt Tarnowski (GHI 117) but was not synthesised.

Construction of the thienopyrimidine scaffold

It was found that the desired ring closure of formamide and methyl 3-aminothiophene-2-carboxylate could not proceed in the conditions tested. This ring closure was instead carried out using formic acid and ammonium formate in lieu of formamide. Steps 2 and 3 (above) proceeded without controversy to give the aminothienopyrimidine scaffold.

Starting material for this synthesis costs $226 per 25g (from?). The 4-chlorothienopyrimidine product is available from Acros for $293 per 25 g. *Given this, do we just buy it?* Or should we request some from an interested company as a contribution?

Completion of the halogenated aminothienopyrimidine scaffold

Substitution at the 6-position of this aminothienopyrimidine scaffold could not - in our experience - be carried out. Protection of the free amine at the 4-position was found to be a successful strategy for introducing the halogen at the 6-position, however, this method gave low yields. Using the chlorinated thienopyrimidone (X) in a lithiation/halogenation was found to be the most synthetically tractable way of introducing the desired functionality whilst maintaining workable yields (~50%). An amine was introduced at the 4-position using ammonium hydroxide solution in a sealed tube (120 °C).

The step that involves n-BuLi would best be avoided, and if a more direct route of arriving at the Suzuki coupling step could be discovered, that would take a potentially dangerous and difficult step out of the synthetic route.

One possibility, involving NIS and an ionic liquid such as 1-Butyl-3-methylimidazolium tetrafluoroborate (which our lab doesn't have, but which is available from Aldrich in catalytic quality from $247/5g), is found below:

[dx.doi.org/10.1139/V09-125 Here] is another alternative, where the direct iodonation of arenes can be carried out using oxone and NaI. Whether or not this would work in my compound, given selectivity issues, is something that I'll have to investigate.

This paper shows a method of direct halogenation of thiophenes. This uses [Bis(trifluoroacetoxy)iodo]benzene, which we don't have lying around, but which can be bought from Aldrich for $136/10g. The reactivity of thiophenes vs pyrimidines is something I'll have to look into. UPDATE: I've read Clayden et al. (2012, p 727) and I'm informed that pyridine is, generally speaking, terrible at electrophilic aromatic substitution reactions. My understanding is that pyrimidine has the same reactivity as does pyridine, so there shouldn't be any selectivity problems with any of these reactions (a result that was perhaps anticipated by the BuLi reaction proceeding at the alpha position on the thiophene ring in the first place).

The BuLi reactions have literature precedent. Heffron (2010) acheives a very similar reaction, albeit with protection of a pyrimidine position (which doesn't seem to be reacting in my case anyway). Snegaroff (2009) uses (TMP)3CdLi to acheive the metallation/iodination. This less harsh base can be used at rt. This author discovered the reagent, so they are probably interested in self promotion. In any case, there is precedent for the lithium metallation proceeding.

A post on ChemForums suggested that the sulfur might react with the iodine. According to Joule & Mills (p. 234) this won't happen. "The five membered heterocycles do not react with electrophiles at the heteroatom." and "...in pyrrole, electrophilic addition at the nitroge would lead to a substantial loss of resonance stabilisation - the molecule would be converted into a cyclic butadiene, with an attached nitrogen carrying a positive charge localised on that nitrogen atom.

A search performed on SciFinder at 8:57pm revealed that the meta sulfonamide is NOT novel.

Generation of the Boronate Ester

Additionally, the thiophene available from Sigma Aldrich for $159/10g can be made from the following synthesis. 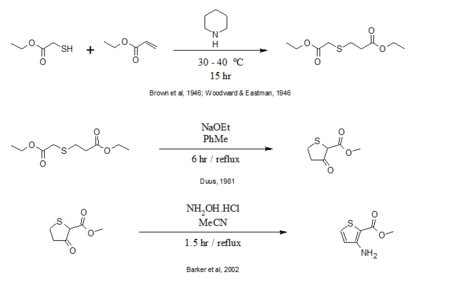 A list of commercially available compounds with similar structures to the one I'm trying to synthesise were identified with much help from Iain Wallace. If you're reading this and are interested in donating samples of these compounds, please contact someone on the project.

Iain Wallace created a cytoscape file which details purchaseable compounds related to the two series that I am trying to make. The file can be found here, and Cytoscape can be downloaded for free here (one will need to activate the chemviz plugin, which can be activated from within Cytoscape). The results of this work, in the form of a list of purchaseable compounds, can be found here

A list of the above compounds in .csv format, with InChi, InChiKey, SMILES and eMolecules identifiers, can be found here.

These compounds, and relevant data, are shown below:

Two compounds have since become unavailable from Enamine. These are commercially available but with a less strict similarity search on emolecules. http://www.emolecules.com/cgi-bin/rene/visitor.cgi?h=c22c97319d83c434da71f7f53149d7d2aaf0fe3014125ab4 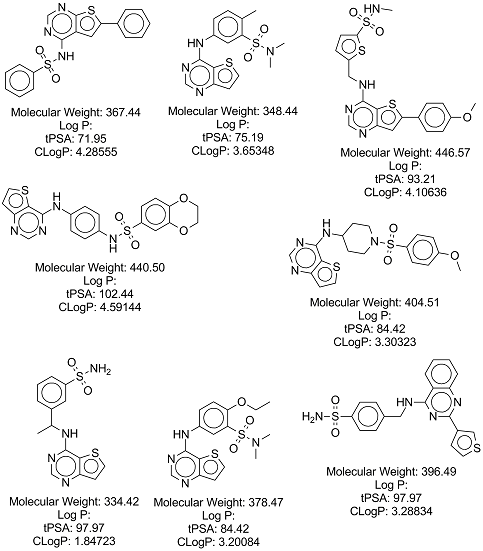 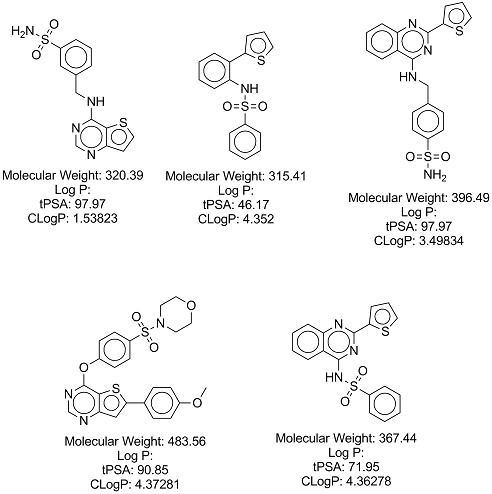 This image presents some strategies for assessing SAR's on the aminothienopyrimidine core. 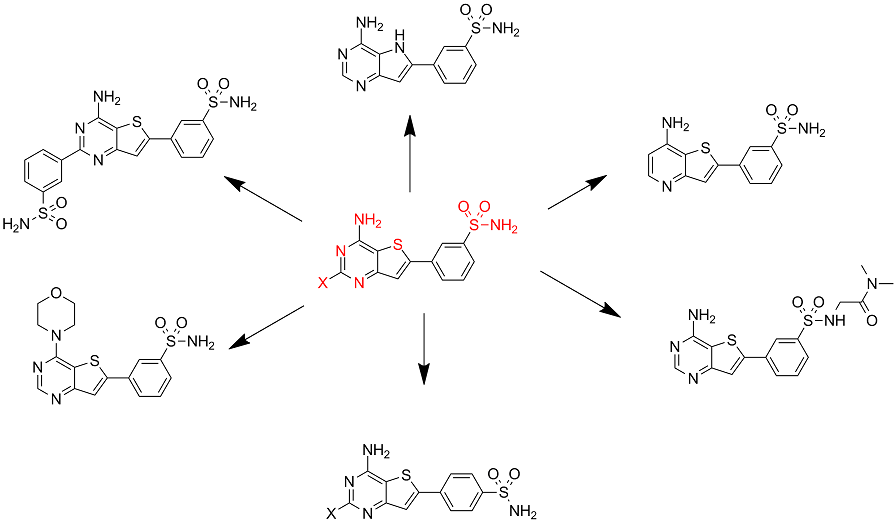 Honours Thesis by Jimmy Cronshaw (submitted and examined) entitled "Open Source Drug Discovery: Effort Toward the Synthesis and Evaluation of Two Antimalarial Drug Candidates" may be downloaded from Figshare. The thesis is in PDF form, but contains much of the early data on this page.