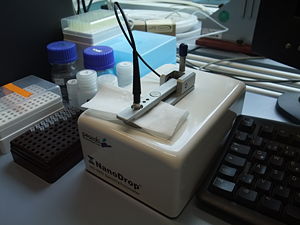 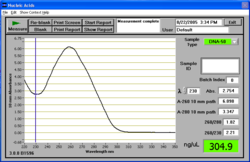 Typical DNA peak as measured by the Nanodrop on PC 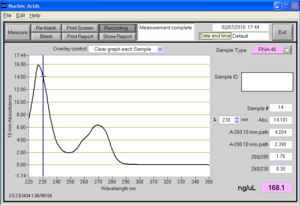 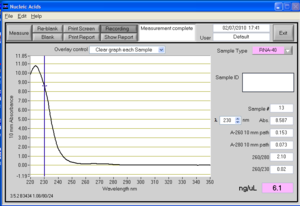 If you see that a liquid column is not being formed, the surfaces may have been un-conditioned by protein or surfactants. Rub each surface 15-20 times with a dry Kimwipe to buff. Using 2 μL samples should ensure the formation of a column.

Occasionally, the Nanodrop can give strange readings. One method to help prevent against this is (after you blank the instrument and wipe the sensor) to pipette on 2 μL of your blank once more and click measure. Then verify that the absorbance is at or near 0 for all wavelengths. If it is not, reclean the sensor and start again. Perhaps this effect is due to a liquid column not being formed?

We had issues of the Nanodrop freezing up sporadically during measurement such that the software became completely unresponsive and the machine was stuck in a measurement state. Tech support responded and said that static discharge can interfere with the computer/machine connection. They had previously sent out a batch of cables which were defective. The USB cable should be white not black. If your USB cable is black, you should probably call them up and ask for a replacement. --Austin 15:17, 18 April 2006 (EDT)

How does the Nanodrop convert A260 to concentration in ng/uL?

The Beer-Lambert equation is used to correlate the calculated absorbance with concentration:
A = E * b * c
Where A is the absorbance represented in absorbance units (A), E is the wavelength-dependent molar absorptivity coefficient (or extinction coefficient) with units of liter/mol-cm, b is the path length in cm, and c is the analyte concentration in moles/liter or molarity (M).

c = A/(E * b)
Where c is the nucleic acid concentration in ng/microliter, A is the absorbance in AU, e is the wavelength-dependent extinction coefficient in ng-cm/microliter and b is the path length in cm. The generally accepted extinction coefficients for nucleic acids are:
• Double-stranded DNA: 50
• Single-stranded DNA: 33
• RNA: 40
For the NanoDrop® ND-1000 Spectrophotometer,paths of 1.0 mm and 0.2 mm are used compared to a standard spectrophotometer using a 10.0 mm path. Thus, the NanoDrop® ND-1000 Spectrophotometer is capable of measuring samples that are 50 times more concentrated than can be measured in a standard spectrophotometer.

This answer was received in an email response from an Application Scientist at Nanodrop Technologies, Inc.

"Yes, the Cell Cultures module is currently displayed at 1 mm and not 10 mm.

Regarding microbial cell cultures in suspension:

The short answer: The ND-1000 can be used to estimate bacterial growth cultures, and any limitations will be similar to limitations of other spectrophotometers.

The long answer: The fundamental issue surrounding bacterial culture growth measurements is that an absorbance spectrophotometer is being asked to determine light scattering caused by particulates in suspension. In this case, transmittance is not related to absorbance in the classical sense. Under normal true absorbance conditions, spectrophotometers can be comparable to one another because the sample actually absorbs electromagnetic energy. In the case of a reduction of transmittance caused by light scattering, readings are very dependent on the optics of a specific spectrophotometer as well as the cell type in suspension. For bacterial growth determination, even 1cm path length systems can vary greatly due to the variability of the optics of each system. The ND-1000 will display an 'absorbance' value approximately 10 fold less than 1cm systems due to the fact that the instrument is utilizing a 1mm path length. However, the difference will not be exactly 10 fold due to the reasons I've described above. The point is that the differences between the ND-1000 and a 'conventional' spec (apart from the 10 fold difference due to path length), will be similar to differences found between spectrophotometers that utilize a 1cm path length."