This is a protocol for checking the mating type of a strain of interest using tester strains that are super-sensitive to mating pheromones. Your strain of interest is patched (or stamped or replica plated) onto a sensitive tester lawn and the formation of halos on the lawn (due to growth inhibition of the sensitive strain) indicates that your strain is the opposite mating type of the tester.

The strains were made in the Thorner lab. See Julius et al (1983) Cell, 32, 839-52 for documentation of DBY7730. DBY7442's exact genotype is unknown. The sst mutations make them super-sensitive to pheromone. When exposed to pheromone of the opposite mating type, the cells arrest.

Please feel free to post comments, questions, or improvements to this protocol. Happy to have your input! Please sign your name to your note by adding '''*~~~~''': to the beginning of your tip. 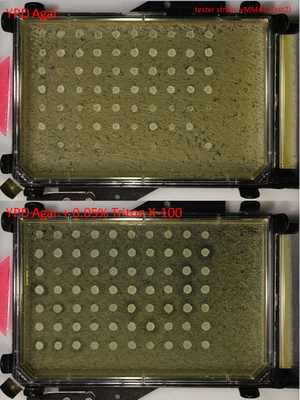