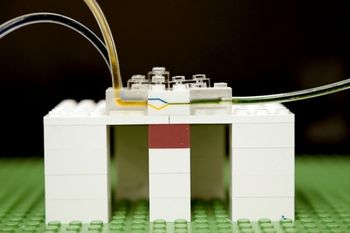 Figure 1. A microfluidic device made with micromilled Lego pieces, assembled together on a base with tubes attached to inlet and outlet points. Image adapted from Ref [1

Lego Microfluidics is a cutting-edge field in engineering and scientific research, first developed in 2017-2018 by a team at MIT, that combines the design of interlocking bricks with that of high-precision modular microfluidics [1]. It requires an adaptation to the standard commercially available Lego bricks design, involving a micromilling step following the typical injection-molding procedure to create microchannels [2]. These bricks, typically made of PDMS nowadays, are extremely versatile and offer many signature characteristics such as reversible sealing, automatic alignment of microchannels, and several relevant applications for biological and engineering research [3].

Microfluidics is the science of fluid manipulation through microchannels that operate via syringe pumps or pressure regulators at the scale of microliters to picoliters. The network of channels resembles that of a piping system where various fluids flow and mix. However, in the case of microfluidics, the entire system is on a device that is usually only inches across and exhibits laminar flow characteristics as opposed to turbulent flow. At the small-scale, sample volume requirements for testing are reduced, various biological and chemical systems can be easily mimicked, and enhanced controls over experimental conditions are offered. High throughput procedures, easy detection of compounds, in vitro modeling for drug delivery purposes, and filtration tasks are a handful of examples of uses associated with microfluidics.

Typically, microfluidic devices are created by a replica molding process called casting where specific PDMS layers are joined together along the way via heat and plasma treatment or similar methods, followed by valve actuation. Microfluidic systems are designed to integrate all operations onto a single chip, giving it the name “lab-on-a-chip.” Alternatively, the system can be divided into individual multipurpose modular units and assembled at the end as per the scientist’s overall design and functional necessity. This allows researchers from different labs to modify the design as needed just by either altering the digital model (as in computer-aided design or CAD) or simply assembling the right combination of blocks to create what they desire. 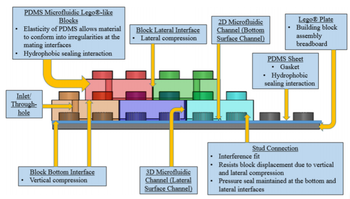 Figure 2. A side view of a Lego microfluidic assembly with descriptions for each component. Image adapted from Ref [3

More specifically, scientists have developed a method involving a Lego-like platform for such microfluidic device assembly. Interlocking building bricks, better known as Legos® on the commercial market, are manufactured to fit and snap together securely because of their highly consistent design. Scientists Anastasios John Hart (an Associate Professor of Mechanical Engineering) and Crystal E. Owens (a graduate student of Mechanical Engineering) at the Massachusetts Institute of Technology (MIT) have recently looked into manipulating these toy bricks and using them as a basis for a revolutionary design in the field of microfluidics [1]. These specially designed bricks are typically cast from a 3D-printed master mold using PDMS for its simple reproducibility and versatility, and are then micromilled with channels [3]. The blocks can then fit together in any orientation necessary, similar to toy Lego bricks, to construct a desired system.

Although this innovation has enhanced the field of microfluidics, a few drawbacks exist. For instance, micromilling can only drill channels that are at the microscale as opposed to the nanoscale. Additionally, the plastic of the Lego bricks is incompatible with certain chemicals that needed to be injected into these systems. Scientists are working to address these problems by devising alternative etching techniques and coating the blocks with compatible polymers, respectively [1].

Figure 3. An example of a microfluidic Lego block, with microchannels carved into its side and through the lateral surfaces. There are four studs on the top surface and four stud holes on the bottom, enabling an easy-fit between any two or more blocks. Image adapted from Ref [3

The basic design incorporates the standard set of blocks that come as part of a Lego set. The base plate is the largest of the set, typically several studs across and a number of studs wide, and serves as the foundation upon which the structure can be built. In the case of microfluidics, the base plate also serves as the sealant for any channels that may have been carved out of the bottom of the bricks. [3].

The building bricks come in a variety of sizes, the most common ones being 2x2 studs and 2x4 studs. As seen in Figure 3, channels are precisely micromilled to ensure that they perfectly align when bricks are assembled together. Misalignment could lead to leaks or clogging of flowing material [3]. Most channels additionally have an O-ring attached to each inlet and outlet to fill the gap between two adjacent blocks, thereby avoiding leaks [4].

There are multiple configurations in which the microfluidic device can be assembled in, including the 2-layer single basket weave, 2-layer lateral surface channels, and the 3-layer assembly, as shown in Figure 4. All assemblies need to be observed under a microscope to ensure exact alignment of channels, edge lift, surface roughness, burst pressure, and stud fit. Leaks can additionally be observed and addressed by injecting colored water through the channels to visualize any weak spots [3]. 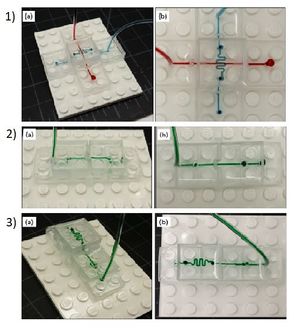 There are several steps to the fabrication process that must be followed like a recipe to yield the best products. The first step is to create a master mold that will later be used to cast the actual building blocks. AutoCAD software is used to design a two-dimensional design, with the 3D features later added on in Solidworks. The complete design can then be 3D-printed. The MIT scientists specifically used R5 Gray in their EnvisionTEC Perfactory 3 Mini 3D Printer, using a digital light processing (DLT) technique that is highly precise [3].

Figure 5. A cross-sectional side view of the fabrication process for creating a block. Image adapted from Ref [3

The fully assembled Lego structure can be used for several biological and chemical operations including filtration of molecules or cells into droplets, sorting them by size, mixing fluids into gradients for experimental purposes, or even mimicking microenvironments found in the body for in vivo studies [4]. Recent developments also allow for pollution monitoring, drug screening and testing, medical diagnostics, and chemical detections. The prefabricated pieces require nothing more than a simple assembly, eliminating the need for lithography procedures in clean-rooms [5]. 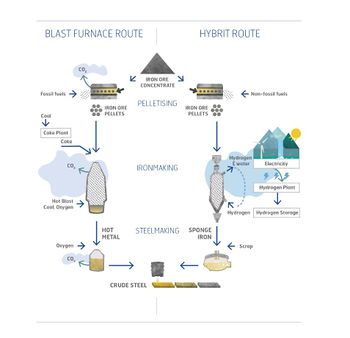 Figure 6. Schematic showing the conventional iron and steel-making pathway (titled “Blast Furnace Route”) and the improvised environmentally friendly pathway (titled “Hybrit Route”). Hybrit eliminates the need for fossil fuels such as coal, and the release of carbon dioxide emissions. It requires an input of only clean electricity and hydrogen, outputting water and hydrogen into the air. Image adapted from Ref [8

Microfluidic devices allow for small-scale experimentation or tests of models before scaling up processes to the industrial level. An example of this involves a Swedish consortium consisting of companies SSAB, LKAB, and Vattenfall that united to form an initiative called Hybrit in 2016 [8]. They wanted to investigate the possibility of making steel and iron production more environmentally friendly. Instead of using hydrogen and carbon monoxide from coal and natural gas sources to remove oxygen found in iron oxide chunks, thereby emitting carbon dioxide as a side product, the team wanted to eliminate the use of non-renewable resources. Their idea called for electrolysis powered by clean electricity, which would provide hydrogen for iron reduction and emit water as a sideproduct, eliminating fossil fuel usage and carbon dioxide emissions [4].

Before the pilot plant could be set up, scientists used microfluidic systems to test their models. In 2018, Hybrit announced the start of its pilot plant construction after small-scale trials were proven to be successful [4].

A swappable fluidic module (SFM) has been designed and fabricated to be compatible with finger-operated and electricity-free pumps for chemical and biochemical applications. Operations ranging from gold nanoparticle (AuNPs) synthesis from chloroauric acid (HAuCl4) and sodium citrate (Na3C6H5O7) to nucleic acid amplification from the Hepatitis B virus (HBV) with capillary convective polymerase chain reactions (ccPCR) have come to rely on Lego microfluidics because of its convenience.

Lego block assemblies are also “disposable” fluid systems in a way, for they can be taken apart and reconstructed with ease. This makes chemical experiments simpler to execute because one can easily swap out one block for another or change a certain configuration without having to start from scratch, saving time and costs [5].

“Organ-on-a-chip” models have come to better represent in vivo systems and serve as an alternative for animal studies for drug screenings and biological tests. Until now, scientists were only able to construct a single organ model on a microfluidic device. With the introduction of Lego microfluidics to the field, however, researchers are now able to integrate various organ-on-a-chip models into a single system, offering a better representation of the human body as a whole and enhanced results for complex experimental tests. This is a revolutionary advancement because it finally provides scientists with a means to study pharmacokinetics and pharmacodynamics in a single system as opposed to studying the effects on individual organs and piecing together the results [6].

A specific case where this concept was exhibited involved a research team at the University of California at Berkeley, who presented a customizable Lego-like plug and play system called μOrgano. This enabled individual cell cultures of a single organ-on-a-chip system of the heart to connect and integrate into a multi-organ microphysiological system. They concluded that such devices can be fabricated and assembled together like Legos, successfully maintaining cell viability and functionality while providing researchers with much better results regarding the overall biological system [6].

Lego bricks are not only used to mimic biological systems but overall serve as one as well. At Iowa State University, a Materials Engineering team developed a Lego block environment to grow and study plants. The Lego blocks served as walls for individual plant environments, and microchannels were etched into these surfaces for water and nutrient delivery. Microfluidics were used to deliver them in a controlled manner, creating gradients across adjacent plant environments for studying the effects of different chemical inputs. Lego microfluidics’ modularity, scalability, precision, transparency, three-dimensionality, simplicity, reproducibility, chemical inertness, and compatibility with biological operations all offer advantages for using this model [7].