Note: This project summary reflects our initial plan, which involved paraoxon,PNP,or DEP inducible expression of degradation genes. Because our genes arrived late, and given the relative lack of sensitivity of our promoters to the above compounds, we decided to constitutively express degradation genes under ADH1 constitutive promoter. 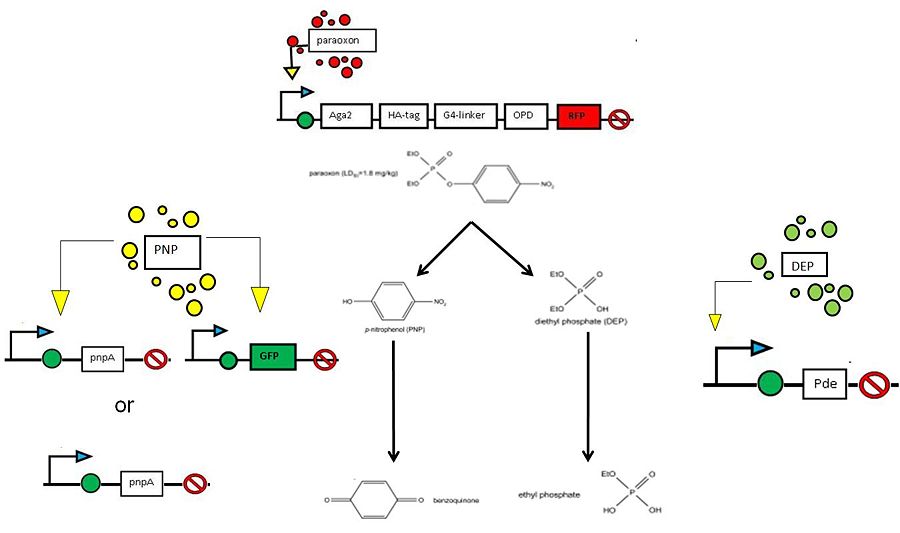 Who are we? In short, we are the University of Chicago iGEM team (and Synthetic Biology Registered Student Organization). Our project this year is (officially) "A yest-based biodegradation and biosensor system for the organophosphate neurotoxin paraoxon." While labs in the past have worked with similar systems and produced excellent results (Keasling Lab at Berkeley and Mulchandani Lab at UC Riverside for example) we've decided to do things a little differently. Using yeast as our model organism, we hope to create an efficient degradation and biosensor package--that is, yeast which will both break down paraoxon and mark the progress of degradation. We invite you to keep up with our projects, and we'll do our best to update these notebooks as often as possible. Enjoy!

Paraoxon is the active metabolite of the commercial pesticide parathion. It is part of a family of organophosphate neurotoxins that include chemical warefare agents such as VX, sarin, and soman. All these compounds are acetylcholinesterase inhibitors--they work by inhibiting the breakdown of acetylcholine by the cholinesterase enzyme, causing prolonged muscle contraction, respiratory depression, and in fatal cases, asphyxiation.