--Anthony Lazzaro 11:51, 11 October 2007 (CDT)Dudes writing up in progress nearly at stage where i can confidently plan out next set of experiments

Files for the following graphs 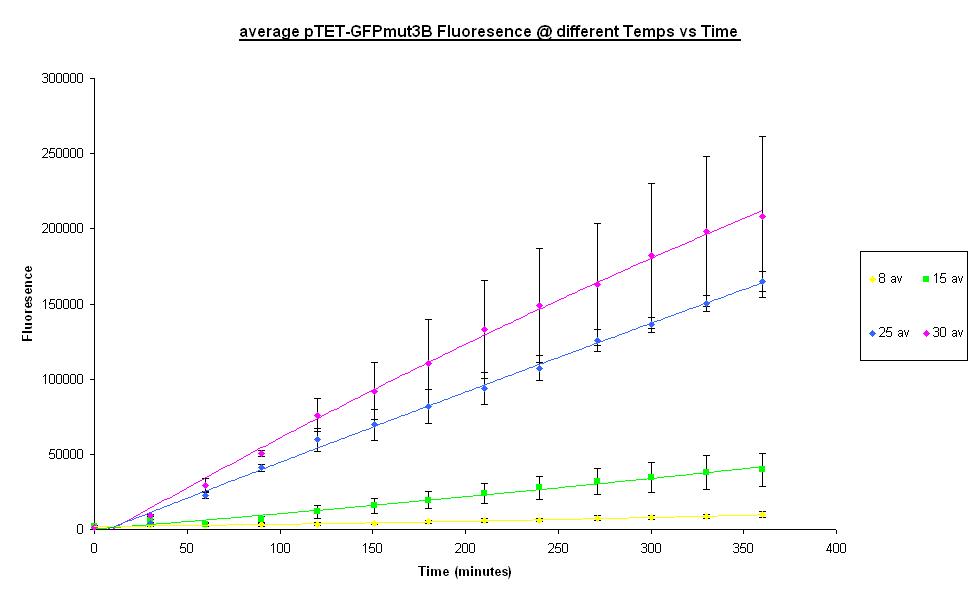 Having determined that our construct works in cell extract we set out to determine our system's expression level has as a function of temperature and time.

As can be seen in the above plot our results showed that for isothermal conditions the level of fluoresence and hence expression increased linearly with time. When comparing different expression levels at different temperatures we see that our sytem produces more at higher temperatures which was expected. 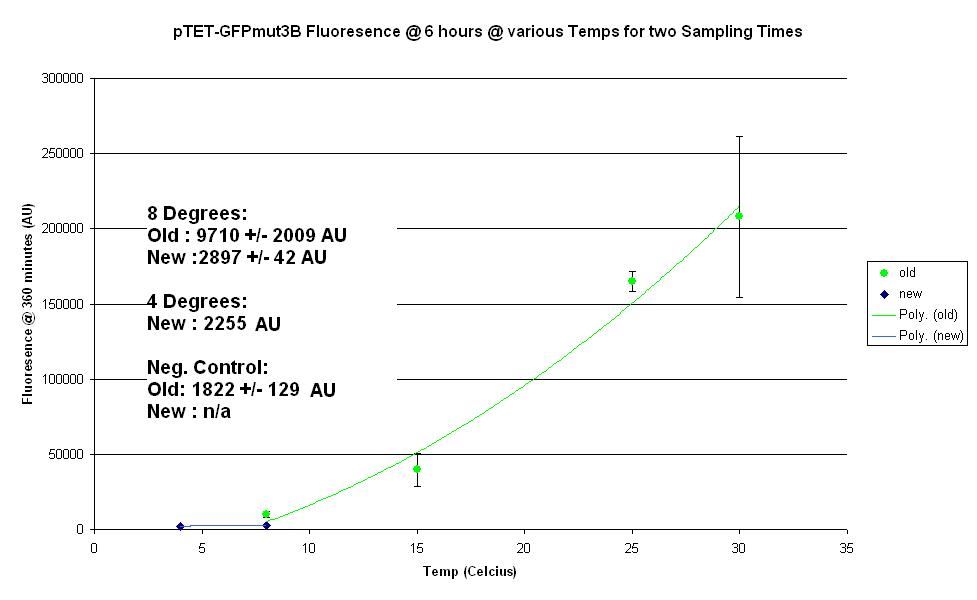 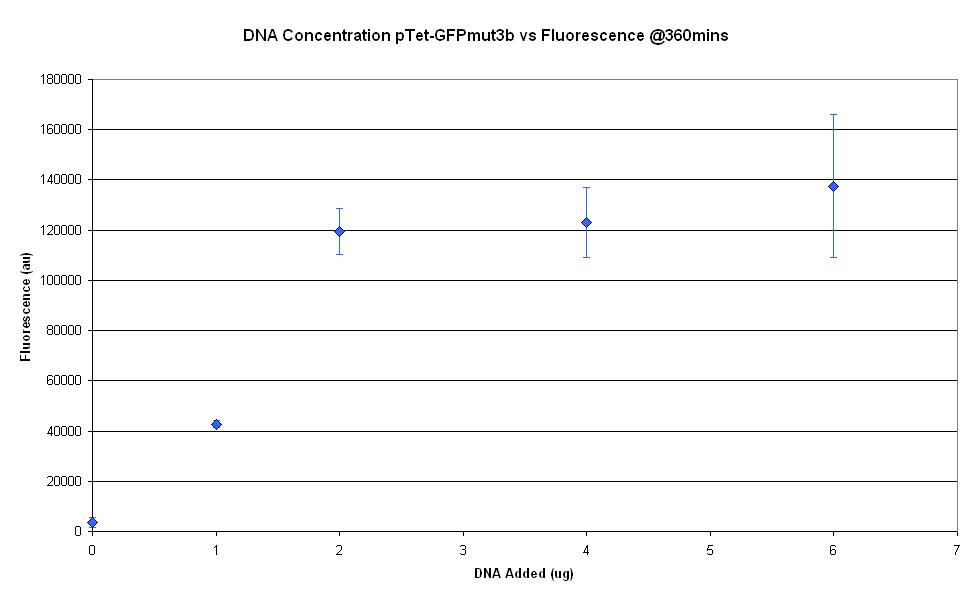 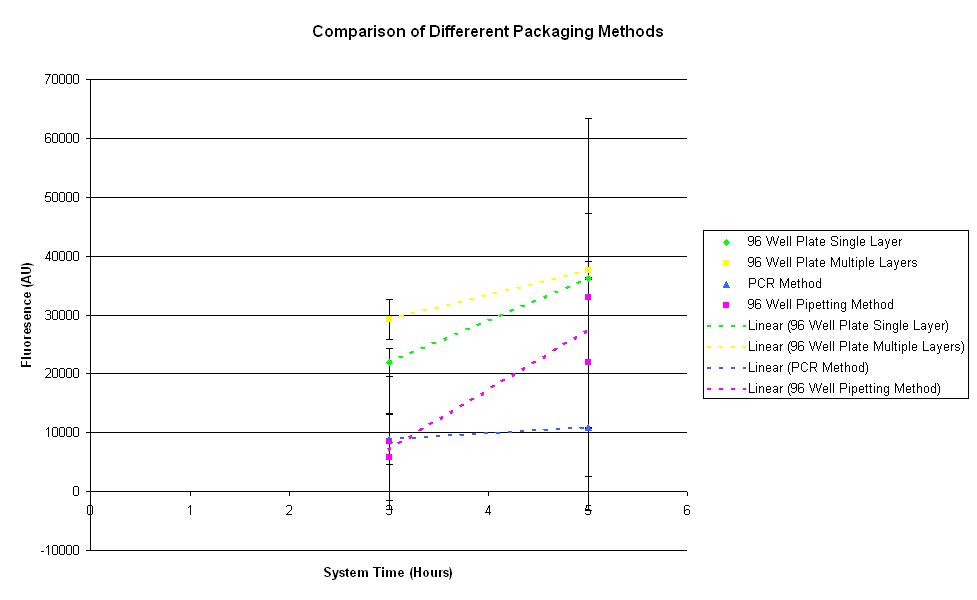 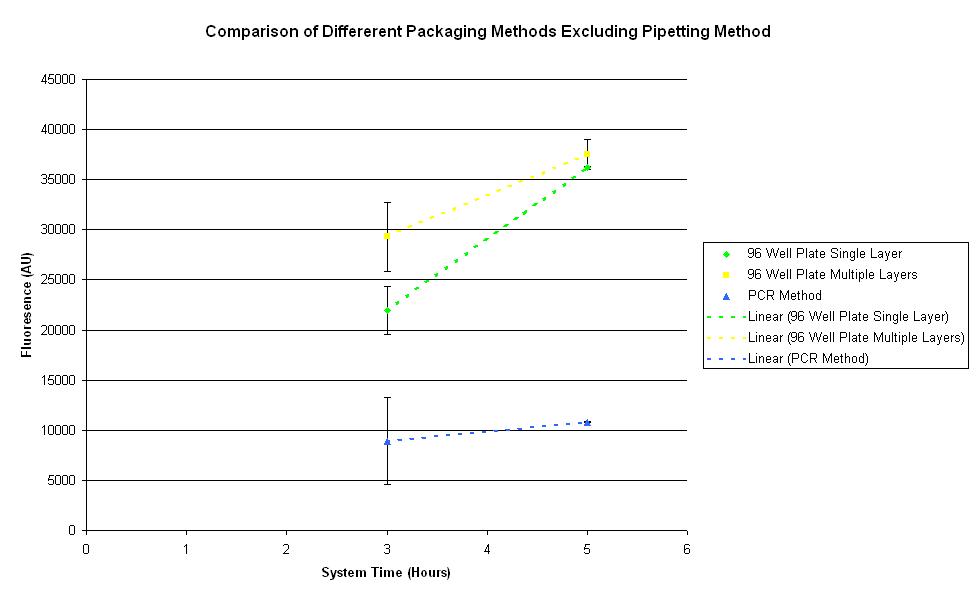 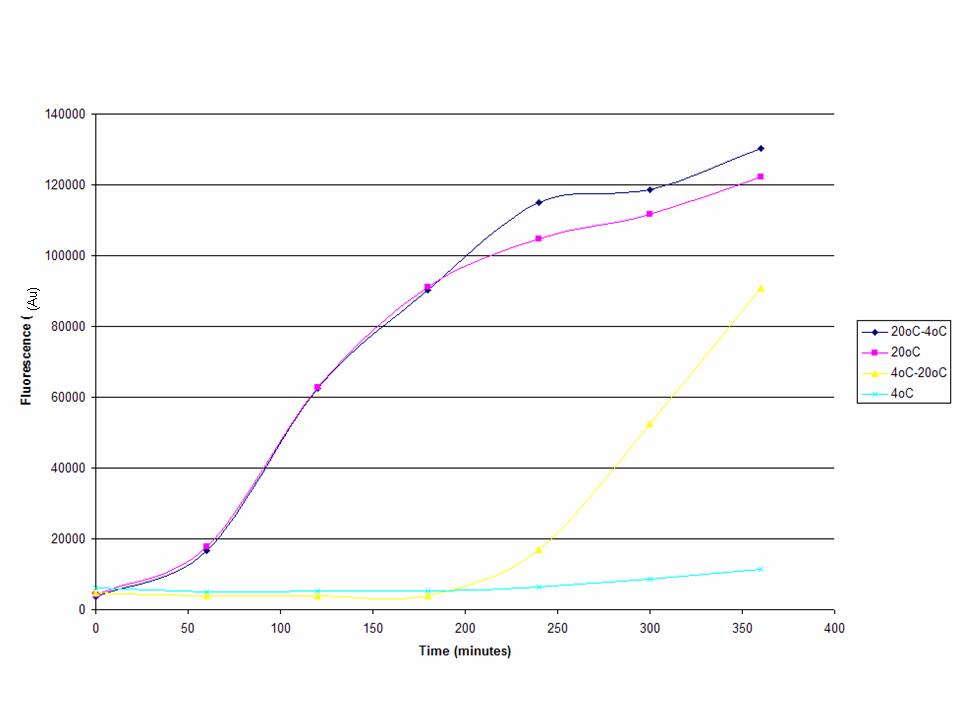 These last experiments for cell by date will hopefully give us enough data to wrap up the project.

For the cold chain breakdown scenario we will use this data like this : we consider our system to be off at four degrees C and that evaporation ofthe system in the cold chain is negligible. According to Koutsoumanis temperatures higher than 10 degrees C are common during transport and so a step from our off temperature 4 degrees to a high one common during transport eg. 20 degrees C will allow us to see if what our sytems response time is and whether if could be used to effectively report a breakdown.

For the TTI beef/pork proof of principle i have data for aerobically stored ground/minced beef and pork at 4 & 20 isothermal and for porks steps between 5 and 20. So that data collected in these experiments will allow us to determine how slow our system is in terms of responding to a change in temperature in relation to the bacteria responsible for spoiling beef/pork.

Mr.Chappell you need to get yer but over here and populate this section !

I have tried to calculate the Ea of our system, pTET linked to Mut3BGFP, and have got a value of 1.5kJmol^-1. If we take the Leak's Ea of the spoilage rxn to be 30kJmol^-1 then our TTI will be accurate to 2 Degrees. However if we take the Giannuzzi's highest value of 220kJmol^-1 and assuming Taoukis estimation rule to be linear, our TTI will be accurate to 10 degrees C when considering the thermal history of the beef.

The only thing we can change with our system is the DNA concentration and we are currently researching the effect this will have on our system. My guess is that it will not change the activation energy of our system but merely the extent to which our system's output is visible.

Where to take Cell by Date

--Anthony Lazzaro 11:53, 11 October 2007 (CDT) Right so had a meeting with F & advisors yesterday and decided that best way forward was to do all of the below options for cell by date, do some steps so i can complete the proof of principle idea, do some further experiments so i can use cell by date as a means of characterising a chassis. So right now I'm trying to sift through everything we've done and also some models for other types of meat, eg the paper that had pork spoilage on an hour basis to come up with a set of 3/4 experiments that will finish off Cell by Date

We're probably not going to present both projects so can use cell by date as a means to characterise the cell extract as a chassis. This would involve:

The logic behind this is that because we are using a constituitive promoter which is widely used this characterisation will prove useful to many other people when deciding whether to use cell extract as a chassis.

We can't do experiments for more than a day because of this coupling our system to the spoilge of meat is not possible. Our only hope for doing this is to not use the fluorometer and have a visible reporter, DsRed is proving to be problematic so another plan is needed.

This plan would be a proof of principle in which we only do experiments over the course of 6 hours using the fluorometer. In these six hours would could characterise the system and try to show it could be use for beef spoilage. There would be four experiements :

4.Step down from 20 to 10 to capture positive history effect

We are using these temperatures because I have found the spoilge time for beef at these temperatures. Further computational work needs to be done to show how beef spoilge will occour in the step scenarios. I have found a paper that does just this and have contacted the author asking for his computer code, i have recieved no response yet so we will proably have to develope our own code.

An alternative route would be to forget about beef and just focus on a break in the cold chain eg. product independant.

This would involve looking up the specifications of a generic cold chain or look at what our system can do and pick a cold chain that is similar so for example we know our system is off at 4 degrees C (need to tripple check) .

With this done we could then hypothesise that evaporation won't be a problem with perfect packagaing and that our system will only express when is taken out of the cold chain eg. above 4 degrees C. so our system is no longer a TTI but merely a switch which tell us if there has been a breakdown in the cold chain.

Finally got around to seriously reading this paper. I discarded it initially because it didn't show it's data for ground beef but for ground pork. However considering that i haven't been able to find a step scenario for ground beef and that it seems like generalisations can be made for ground meats the results of this paper may be useful.

Key results of this paper: