See the Imperial iGEM Lab Status page for the current status of required parts, plus information on colour coding

This is the progress of the aiiA gene

This construct is used to measure the ability of AHL to activate gene expression from pLuxR. LuxR expression can also be modulated from pTet to work out how LuxR levels effect pLuxR activation. We can then use this data to plot a calibration curve of Activation vs AHL concentration. 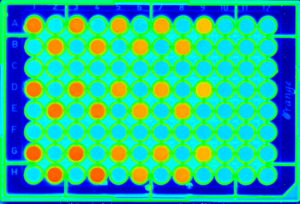 This construct is used to characterise the positive feedback loop, with AHL levels being determined by the assay construct above.

This construct is used to characterise the pLuxR transfer function, and noteably its effect on YFP expression, which would be equivalent to AiiA expression in the full system with one promoter.

This construct is used to characterise the pLuxR transfer function, and noteably its effect on YFP expression, which would be equivalent to AiiA expression in the full system with two promoters.

E-mail from Mr. Barry Canton of MIT regarding parts

Hi John, I was forwarded your email below as I have done some work with the quorum sensing systems you are asking about.

Most of our testing was with F2620. The best place to read about our characterization of F2620 is on openwetware by going to this page - http://openwetware.org/wiki/Endy:F2620 All the experiments we have done are described there.

You are asking about time to send and receive signals. We haven't done much work on transport times for the molecules through liquid media or over solid media but if you can specify what the experimental set-up is I might have some qualitative comments. Our experience has been that the receivers activate transcription within minutes after addition of HSL to liquid media.

Ron Weiss at Princeton has done some tests where he looked at receiver cells placed at different distances from sender cells. He made some movies showing the closer receivers being induced first. I think that some of that data should be available in his papers.

Anyway, let me know if you have some specific questions and I can try and give you more specific info.

Good luck with the oscillators, I'll be watching the progress on OWW!

Hi John, we did very little testing with I13207 and the results were not especially conclusive. Had we continued the testing somewhat more rigorously, we may have had better results.

If you download the presentation linked below, which we gave at the Jamboree in 2004 you can have a look at slide 41 which has some of the data we got for I13207. Basically we induced receiver cells in the presence or absence of arabinose which should induce aiia production. The drawback of that experiment was that we were using MC4100 for which arabinose is toxic. You might have better results in another strain. I just had time to transform into MG1655 and do one experiment before I switched over to working full time on my thesis project. The results in that experiment suggested that there was low levels of induction of the receiver when aiiA was expressed. I was inducing with 0.02% arabinose at the time.

All our experiments with these receiver devices were basically the same. Grow an ovenight in supplemented M9, dilute back 1/500 in the morning, wait until an OD of ~0.1 and then induce with HSL and arabinose if appropriate. We use a 96 well plate reader to measure GFP accumulation over time. You can read more about the experimental set-up on the F2620 page of OWW, its basically the same.

Hope this is of some use and let me know if you have further questions,