<showhide> Wednesday 4th October at 6.30pm, The Royal Society [1] __HIDER__ <hide> Although the life we see around us is very diverse, it is remarkably similar at the level of molecules. A major goal in life sciences is to understand the structure and dynamics of molecular machines in a cell, the smallest unit of life. To do this, we need to have sophisticated tools to 'see' molecules on a nanometre scale, much smaller than is possible with the naked eye.

Professor Iain Campbell FRS is Professor of Structural Biology at the University of Oxford . In this lecture he will discuss methods of studying the structure of molecules and cells and how they have advanced in the 350 years since early microscopes gave the first glimpse of single cells. He will show how modern methods are giving us unprecedented views of the wonderful, complex world of the living cell.

Intresting sequencing results, J37034 is actually registry aiiA not Fray's aiiA. so there is aiiA in the registry. See mini Report ('23 Sept 2006)

Check out the Chemostat Schedule in the lab notebook

Special thanks to Dr Rupert Fray

After a series of challenging ligations, the first major breakthrough in the Wetlab has been achieved: The prey cells have been completed and their genetically engineered sequence has now been verified - with confirmation from gel electrophoresis and sequencing. The gel on the right hand side shows some of the evidence that the plasmid (containing the part with the test construct for the prey cell) has been successfully ligated. It shows the control digest and the resulting DNA bands, which lengths are as expected. Additionally, it has just recently been confirmed from sequencing that the part contains the correct DNA bases. </hide> </showhide> 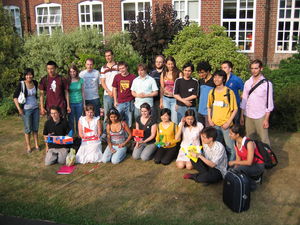 On a hot and sunny day, the I.CoLi team met early in the morning at King's Cross Station, London. You might wonder about the destination: CAMBRIDGE.
On 24/25 July 2006, Cambridge University hosted the first UK iGEM meeting. The teams from Edinburgh and Imperial College visited Cambridge and all three iGEM teams exchanged their experience and ideas from the first weeks as well as taking part in a "mystery challenge" ...


Shortly before lunch, the I.CoLi team met with the Cambridge team and after being shown through the Wetlabs at Cambridge, both teams had a picnic together outside. Instantly, everyone got caught up in talks and so time flew by until the arrival of the team from Edinburgh (whose train unfortunately broke down half-way during their journey).
To get to know more about the different projects each team was working on, presentations were given, followed by short discussions. It was very interesting to see that on the one hand, a common structure could be seen in all team's approaches to their particular idea but on the other hand, the ways of handling a problem or distribution of tasks/organization within a team could differ remarkably.

As a special highlight of the day, iGEM instructors prepared a "mystery challenge": The task for this challenge was to build a boat in 60min. - the fastest boat crossing the river would win! After an hour of intensive work, 5 brilliant boats were ready to go! Despite the promising-looking designs none of the boats succeeded in crossing the river in the end. The best boat, however, went a significant distance along the river (against the currents!) but was never seen again.

The eventful day ended with a cheerful dinner in the city of Cambridge.

A big thanks to Cambridge for hosting the UK iGEM meeting and making it a memorable iGEM day!

AFTER a week of brainstorming and research, the I.CoLi team suddenly appeared with promising ideas in building a new system from standard biological parts. Three main ideas cristallized among the group of young people, which are being pursued further:

Further our idea, the I.CoLi team presented their project at Cambridge University on 24 July 2006. The presentation can be found here. A big thank you goes to the Cambridge iGEM team for hosting us!