First attempt at a protection assay

(and, in the process, more Microcon trials)

(Note from Tiff: A remaining 20uL of each of the six reactions is in a PCR strip in one of the purple pipette-tip-box racks in the fridge, from the work on Monday. They're marked on the tube part of the strip with something like "10M 1X," all the way up to "30M 6X". However, you'll probably want to not use those and just refold two reactions each of the six reactions, so that you'll have one for PEG precipitation and one for Microcon.)

Although Dr. Shih's emails indicated that we try the c5.0 barrel, we'd like to try one with a hopefully-function lid design so we can get moving on a protection assay sooner. Val and Matt chose c4.0.

Depending on Microcon retentate volumes, it may be necessary to normalize the volumes run in the gel. If that's the case, then run half of all the volumes listed.

To save time, space, and sanity, we won't run the supernatants and flow-throughs, since they don't give us much information about yield and purity, and since they'll require lots of Vacufuging in order to obtain normalized samples that will fit in a gel. 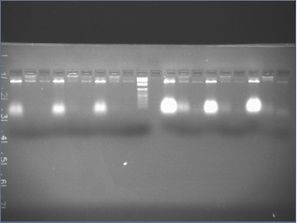 Folded design 3.2.E (aptamers outside, no latches) for use in a future assay in which we test whether the nanostructures are capable of binding thrombin beads.