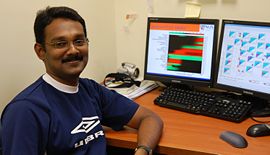 I work for Rudiyanto Gunawan at National University of Singapore (NUS).

Complexity of chemical and biological systems often limits human intuition in understanding the functional regulations and emergent behaviours. To this end, mathematical models have commonly been used to simulate their dynamical behaviour, to which a quantitative model analysis tool can be applied to gain insights. Most of the existing tools, like classical parametric sensitivity, bifurcation analysis and structured singular values, quantify the system dependence on model parameters, by introducing static perturbations. The dynamical aspects of the system are not immediately apparent from these analyses. The reason stems from the fact that the effected perturbations are on system parameters and are persistent on system behavior. To overcome this draw back, we develop novel sensitivity analysis methodologies, for analyzing the dynamics of both deterministic and stochastic models of chemical and biological systems.

Tools developed in this work offer dynamical insights on the functional regulation and signal propagation in the networks of interest. The results give a reaction-by-reaction, molecule-by-molecule and pathway-by pathway account of how networks function or output behavior is accomplished. The efficacy of the tools developed is evaluated on both synthetic and real networks of chemical and biological systems. Other than analyzing the dynamics, the knowledge gained will have applications from robustness-fragility analysis to identifying robustness causing mechanisms to model reduction and validation to design of future experiments. In addition, the biological knowledge gained can assist drug discovery efforts in the identification of potential drug targets, the understanding of drug efficacy and specificity, and finally the optimization of drug dosing and timing. The development of these methods represents a concrete step towards robustness-based drug design through systems biology and systems medicine.

Assessment, Benchmarking and Development of Methods for Biological Network Identification

Technological advancements in post genomic era have confronted us with enormous amount of genetics and omics data sets. Inferring biological networks from these heterogeneous data sets have important applications, from finding treatment of diseases to engineering of microbes to produce drugs and biofuels. But, organizing and structuring these data sets to give a coherent biological picture is a formidable task. In recent years, considerable attention has been drawn in the reverse engineering activities (like DREAM challenge). Despite the tremendous efforts from different disciplines to tackle this problem, resulting in hundreds of algorithms and examples, such inference is still very much an unsolved problem. All we have at this time, at best, is a partially corrected fragment of interactions between genes and other cellular entities. Hence to succeed in our quest for understanding biological system as a whole, more comprehensive inference methods are required.

Currently, there are several approaches developed to reconstruct genetic networks from the high throughput data, ranging from system of equations to Boolean networks to Bayesian networks to information theory models. But most of these approaches are problem specific. Hence, in light of the large number of available inference methods, benchmarking and assessment of these methods has become a necessity. On the other hand, there exists superior tools, more than a decade old, developed for causal inference of non-linear time series data. Therefore, the overall aim of this work is to give answers to the challenge of biological network inference using a two-pronged approach. The first is to develop a new benchmarking and assessment procedure to evaluate network inference methods and the second is to devise a hybrid method, integrating parametric and non-parametric identification procedures, for network inference.

In Center for Environmental Science and Engineering, IITB

Industrial revolution and technological advancements have necessitated a vast increase in the use of crude oil and petrochemical products, as a prime source of energy. These non-aqueous phase liquids (NAPLs) contain large number of hazardous and toxic constituents. Hence over its entire lifecycle including extraction, transportation, refining, storage, usage and ultimate disposal, there is a considerable risk to the environment. Bioremediation of the affected areas with the use of microorganisms offers a viable and cost effective solution. But this bioagumentation processes are significantly affected by the inherent capabilities of the microorganisms, their ability to overcome the bioavailability limitations and by the ever changing environmental conditions. Hence it is utmost necessary to design the consortium, study the bioavailability and changing environmental conditions before a bioaugumentaion process.

This work was aimed at creating one such process with designed consortia in a fixed film reactor for diesel oil remediation. The overall objectives of the project included isolation of oil degrading cultures after multiple enrichments, design of consortia for the degradation of both aliphatic and aromatic components of diesel in a fixed film system and the design and implementation of the rotating biological contactor (RBC) to treat the oil-water emulsions. My specific aims were to startup the RBC and optimize its media components. Studies to understand the oxygen mass transfer and the nitrogen carry over effects during remediation were also performed.